Arizona » What is an Arizona Mountain Kingsnake (Lampropeltis pyromelana) 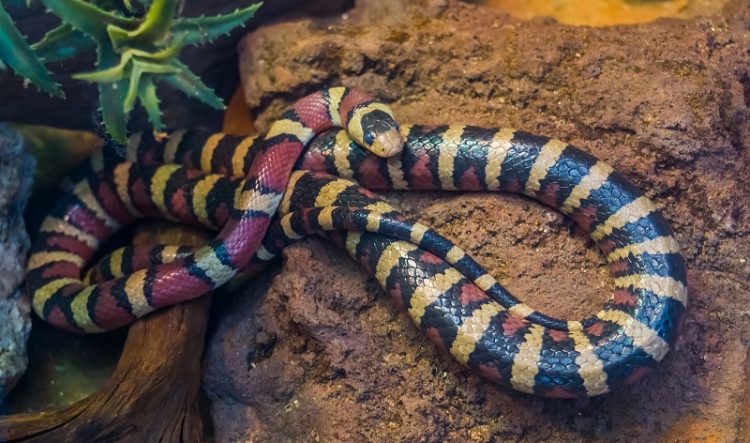 If you think these snakes are a dangerous coral snake, you’re not alone. Arizona Mountain Kingsnakes over the years have done what we call Batesian mimicry, a form of imitation named after English naturalist Henry Walter Bates. What that means is over time, the Arizona Mountain Kingsnake evolved its color patterns to mimic that of a coral snake which has a deadly bite if you are a medium sized mammal or bird trying to eat it. As stated before, this snake is relatively harmless, so looking like a feared food source or prey is incredibly advantageous.

A couple of ways you can tell a Arizona Mountain Kingsnake and a coral snake from one another is their size and coloration. A kingsnakes are typically larger than coral snakes reaching over 40 inches in length whereas the coral snake will typically top out around 3 feet. While their colors are similar, the way the colors interchange on the coral snake versus the kingsnake are ever so slightly different. A coral snake will almost always have a mostly or fully black head and red and black skin separated by a band of yellow. The kingsnake will have red, black, and yellow skin with the red and black touching a majority of the time.

Due note that there can be differences where it is hard to tell which snake you are dealing with so unless you have someone who is trained on how to accurately identify either snake, do not go touching or trying to pick up the snake. You could be right most of the time but it only takes one time being wrong to really ruin your day.

One other way that could help you in a pinch in determining which snake is in front of you is to look at their head and snout. The Arizona Mountain Kingsnake will have a longer head with a pointed snout whereas the coral snake will have a short or stubby snout that is more rounded off. Again, do not touch either snake unless you can be 100 percent sure and have training in identifying on or have someone with you who can do it. It’s not worth the risk and hospital bills.

The Arizona Mountain Kingsnake is a long and sleek snake with large eyes and beautiful banding running the length of its body. If you have the time to ever count the bands on the kingsnake, for whatever reason that may be, you can expect to find over 40 bands on a fully grown snake.

The bands on the snake will typically be red, yellow, and black with the red bands being the thicker of the three. The yellow bands are the second thickest and are separated by a thin black band preventing the yellow and red bands from touching most of the time.

The bands will often become thicker as you move down the snake towards the tail.

Arizona Mountain Kingsnakes will hunt and eat lizards, rodents, eggs and other snakes.

Like other kingsnakes, the Arizona Mountain Kingsnake will start mating season in early to late spring and ending in August. This can change depending on how warm the climate is as the snakes prefer to breed when it gets warm but not too hot.

For instance, a snake in the desert will typically start early spring to avoid the 100 plus degree heatwaves it may face where as a snake located further north may start late spring.

A female snake will have more than one clutch a season with each clutch ranging from 3 to 24 eggs.

As you could’ve guessed based on the name alone, the Arizona Mountain Kingsnake is found in the mountain of Arizona. While Arizona may be its main habitat, the snake can also be found in parts of east Nevada, central and west Utah, southwestern New Mexico, and Sonora and west Chihuahua, Mexico.

In the wild, Arizona Mountain Kingsnakes will live anywhere from 10 to 20 years in the wild and as long as 30 years in captivity.

As of writing this, the Arizona Mountain Kingsnake population is considered stable which means it does not have any major laws protecting the species.