Broken Hills, also known as Hot Spring, was a mining district that spans multiple Nevada counties – Churchill,  Mineral, and Nye Counties. (See the map below to show the location between the counties.) 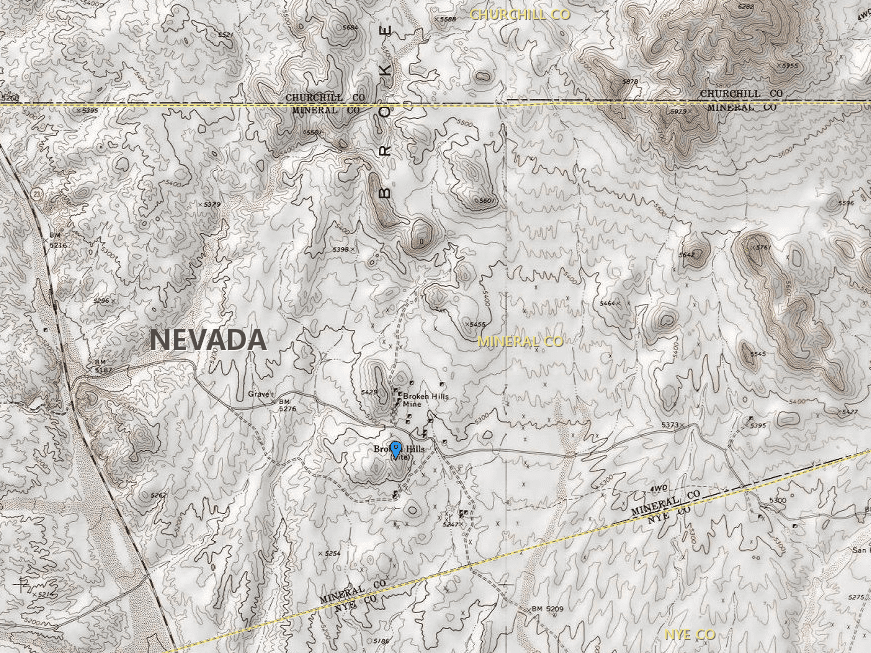 In 1913, the district was discovered by James Stratford (born in England and immigrated in 1886 with his mother and sister as a young man of the age of 11) and Joseph Arthur (originally from Wisconsin), who worked there till 1920 when they sold out to the Broken Hills Silver Corporation.

W. H. Kinnon, Engr. of the Kansas City – Nevada Cons. Ms. Co., whose property is located in the Bruner District, Nye Co., was appointed manager, and arrangements were made to treat the Broken Hill ore in the Bruner mill.

The Population of Broken Hills Nevada

How to Get to Broken Hills Nevada

From the 1923 mining reference book:

The Broken Hills District occupied a group of low hills between the Fairview and Ellsworth Ranges in S. E. Churchill Co., on the Nye Co. border. Fallon on the Southern Pacific Railroad and lies 63 m. to the N. W., and Luning on the same railroad, 48 m. to the S. W.

You will find Broken Hills north of Gabbs off of SR 361. There is a sign that reads “Broken Hills, Quartz Mountain” that you will turn and drive up the road approximately three miles to the mining site.

Joseph Anderson came in this from the new camp of Broken Hill, the latest strike in Churchill county, says the Fallon Eagle. He brought in 24 sacks of ore for James Stratford and Joe Arthur, the men who made the strike, and the ore was taken to me reduction work at Hazen.

This strike, was made about a month ago and while, little has been heard of it here the country has located for four or five miles around. It is located in the extreme southeastern part of Churchill county, east of Bell’s flat. Broken Hill is described as being 15 miles east of the old camp of Gold Crown, which is seven south of Fairview.

At the present depth of only about six feet has been attained yet about eight leases have been let on the property and the men are all starting shafts or veins of ore. Ore taken out assays $30 in silver and $4.60 in gold.

There is considerable quantity of ore taken out besides that brought in by Mr. Anderson. Water for the camp has to be hauled from Luning, 12 miles distant, and wood is found 15 miles away. Mr. Anderson is starting a wood and feed yard. He says the discovered of the camp prefer to make their shipments and get their supplies by the way of Fallon, but that in to bring the traffic this way it will be necessary to expend a couple of hundred dollars on the road in Gold Crown canyon. An effort is being made to raise funds through the business men of Fallon and the commissioners to have the necessary work done.

Mr. Anderson came in by way of Bell’s Flat, through Gold Crown Canyon, and over the pass to Sand Springs. he says the road is in pretty fair share with the exception of the canyon above referred to, which would not be difficult to repair.

One of the commissioners of Mineral county, visited the camp am stated that Broken Hill is in Churchill county. However, it would appear to be not far from the Nye county line.

Superintendent Meaker of the Federal Mines company at Rawhide, has been stopping in town for a few He has visited the Broken Hill twice and says there can not be much question but what a mine will be developed there. He took some assay of the ore, the lowest running $32 and the highest $262.

Articles of Incorporation of another Utah company to take over and op crate a Nevada property, o nm. filed with the secretary of state of Utah. It Is the Crackerjack Consolidated Mining company, with 150,000 shares of 10 cents par value, or a capitalization of 15,000. The officers and Incorporators are Charles Read, president; John J. Roberts, vice president; J. H. Woodtnansee, secretary and treasurer, who with Joseph II. Arthur and James M. Stratford constitute the directorate.

The Crackerjack embraces three claims In the new and unorganized district known as Broken inns, in Churchill county, about 15 miles north of the old camp of Lodi. Lulling is the nearest railroad point.

Already work has been started on the property. Mr. Arthur, the discover of the camp, will supervise developments. He is sinking on one of the well defined veins which out crops through the ground.

Some ore is being sacked and shipped from the original strike which adjoins the Crackerjack. Both leasers and Mr. Arthur are getting shipping values at various places along the main vein. Some of this ore samples 288 ounces to the ton.

ONCE DRIVE BURRO BUT NOW THEY OWN AUTO

James Stratford and Joe Arthur, who have wandered over a good share of Nevada in search of gold and silver and who have made several discoveries that helped swell the bank roll are in Reno for a few days after a fishing trip in the Reese valley.

They spent part of the summer at their mining. property, the Broken Hills, in Southern Churchill county, taking out and shipping two carloads of ore which brought $70 per ton. They will return to the mine the latter part of the month, after Stratford has had another look at the bright lights of San Francisco, and they expect to ship several cars of ore this fall.

Formerly their prospecting and traveling was done a-foot, prodding their burros which packed the camp outfit and tools. Now they have an auto, for which the Broken Hills mine paid, and they travel at ease.