Buckland Station, a stagecoach station and hotel near Stagecoach, Nevada, was built c. 1870 by Samuel Buckland, the proprietor (who settled here in 1859), who replaced a previous stage station. It was built with a simplified Greek Revival style. It was listed on the National Register of Historic Places (NRHP) in 1997.

The existing Buckland building was built mostly of salvaged lumber from dismantling Ft. Churchill. Buckland Station formerly existed as a Pony Express station and as an emigrant stop and to serve as an early bridge over the Carson River. When listed on the NRHP, the building had just been purchased by the state of Nevada, which has continuing plans for its rehabilitation. 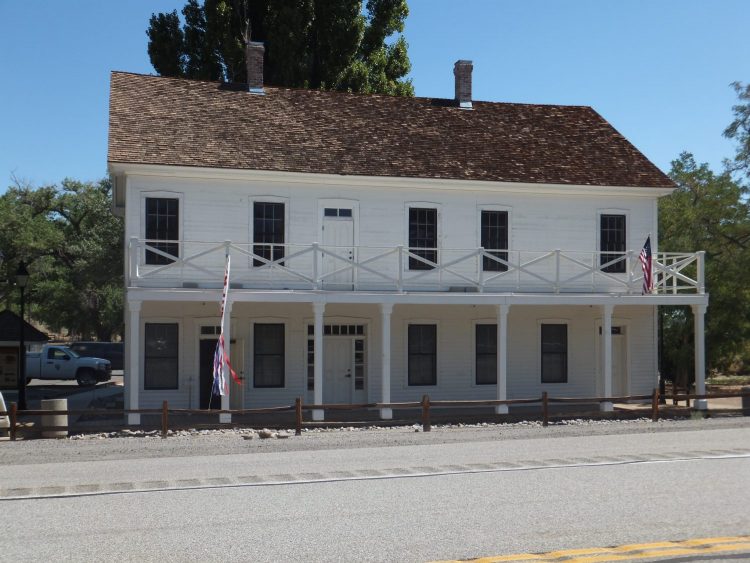 Built in 1870 from materials from Fort Churchill, an army base that was abandoned in 1869, Buckland Station was a Pony Express stop, a supplier for western emigrants, a boarding house, and a home for the Buckland family until 1885.

Self-guided tours allow for a glimpse of early pioneer life in Nevada and a short video outlines the history of the Station and nearby Fort Churchill. Located across the highway is the Orchard Day Use Area which provides access to picnic tables and charcoal grills, as well as a 2.2-mile Nature Trail that parallels the Carson River and connects Buckland Station to Fort Churchill.

How to Get to Buckland Station

From Silver Springs, head south on U.S. 95 for approximately 9 miles to Bucklands Station. You’ll pass the entrance of Fort Churchill State Park on your right, but can swing back through after your historic mansion tour at Buckland Station.

Buckland Station is open on Saturday and Sunday from 10 AM – 2 PM.

From the Orchard Day Use Area, visitors can find the Nature Trail that follows the Carson River to Fort Churchill.

Located directly behind Buckland Station are restrooms and picnic tables. Just across the highway is the Orchard Day Use Area where there are more picnic tables and charcoal grills.

Visitors to Buckland Station can get a glimpse of early pioneer life in Nevada on a self-guided tour through the front of the building. There is a short video outlining the history of Fort Churchill and Buckland Station.

Pets are welcome, but they must be kept on a leash of not more than 6′ in length.

Fires are permitted only in designated fire rings, barbecues, or approved portable stoves.

Visitors must supply their own firewood.

Those with developmental and/or physical limitations are invited to enjoy all of the recreational activities of Nevada State Parks.

If you would like to request additional support or accommodations, please call the Nevada State Parks division office. 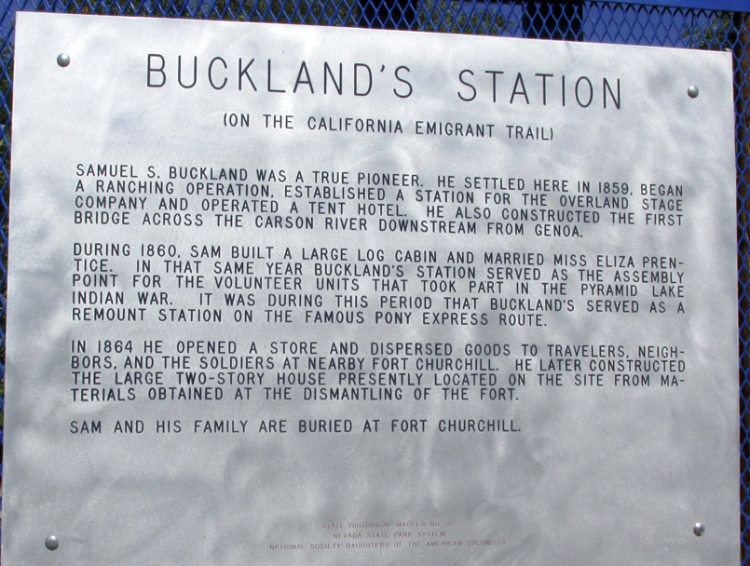 Transcription of the above historical marker for Buckland Station:

Samuel S. Buckland was a true pioneer. He settled here in 1859, began a reaching operation, established a station for the overland stage company, and operated a tent hotel. He also constructed the first bridge across the Carson River downstream from Genoa.

During 1869, Sam built a large log cabin and married Miss Eliza Prentice. In that same year, Buckland’s Station served as the assembly point for the volunteer units that took part in the Pyramid Lake Indian War. It was during this period that Buckland’s served as a remount station on the famous Pony Express route.

In 1864 he opened and dispersed goods to travelers, neighbors, and the soldiers at nearby Fort Churchill. He later constructed the large two-story house presently located on the site from materials obtained at the dismantling of the fort.

Sam and his family are buried at Fort Churchill.