Nevada is home to over 30,000 caves, grottos, and alcoves but many throughout the state are small and known to locals, normally enjoyed by those who hike the area. In the area of Great Basin National Park, there are 40 known caves.

If you are hiking around Las Vegas you will find several shallow caves at the Valley of Fire State Park, a cave found at Mary Janes Falls at Mt. Charleston and Cowboy Cave found at Red Rock Canyon.

Are you a kayaking fan? Check out Emerald Cave for your next outing!

Cave tip: Be sure to wear a hiking hat or some other head covering because no matter how careful you are, it seems someone I am with always scrapes the top of their head and there is blood.

It got its name from Mark Harrington, who first excavated the cave and had a hard time finding the entrance, who said at the time, “This is one hidden cave!”

It was excavated originally in the 1930s by Harrington and then excavated twice more before being returned to for the final time in 1978 by David Hurst Thomas for a more in-depth excavation.

The site dates back to the early Desert Archaic Culture from c. 4000 to 2000 years ago. Thousands of Archaic artifacts have been found here, and the site “provides important, if unusual clues about Desert Archaic lifeways”.

Hidden Cave was not lived in but used as a storage site for goods and tools for the 2000 years of its survival.

Humboldt Cave is an archeological site in Churchill County, Nevada, USA that is one of the earliest documented human habitations in North America.

It was inhabited by people of the eponymous Humboldt Culture and the Lovelock Culture, and its documented habitation extends to 9000 BC.

Lovelock Cave is one of the most important classic sites of the Great Basin region because the conditions of the cave are conducive to the preservation of organic and inorganic material.

The cave was placed on the National Register of Historic Places on May 24, 1984.

It was the first major cave in the Great Basin to be excavated and the Lovelock Cave people are part of the University of California Archaeological Community’s Lovelock Cave Station.

Spirit Cave is located in the Stillwater Mountains foothills at4,154′ and is popular due to the discovery of two “mummies” found in the 1940s by Sydney and Georgia Wheeler.

It contains six rooms and is measured 320 feet long by 120 feet wide.

The cave was first documented by Mark Raymond Harrington in a 1930 edition of Scientific American.

Up until about 11,000 BC (11,000 radiocarbon years ago), Gypsum Cave was inhabited by the Shasta ground sloth.

A few hundred feet away, the Gypsum Cave Mine contains gypsum, anhydrite, and uranium.

The Gypsum Cave Mine is a gypsum-anhydrite and uranium mine located in Clark County, Nevada in the Intermontane Plateaus of Nevada, 12 miles east of North Las Vegas, Nevada.

The Toquima Cave, located on Pete’s Summit in Humboldt-Toiyabe National Forest near Austin, Nevada, is a historic site having cultural importance to Native Americans, specifically to the Western Shoshone.

Also known as Pott’s Cave, as Traditional Cultural Property 26-La1, and as Toiyabe N.F. Site TY-71, the cave, and a 40-acre area was listed as an archeological site on the National Register of Historic Places in 2002.

The cave entrance is fenced off and access to the cave is limited.

Devils Hole is a geologic formation located within the Ash Meadows National Wildlife Refuge, in Nye County, Nevada, in the Southwestern United States. The 40 acres unit is part of the Ash Meadows complex, an area of desert uplands and spring-fed oases that was designated as a National Wildlife Refuge in 1984. Devils Hole—a detached unit of Death Valley National Park—is a habitat for the only naturally occurring population of the endangered Devils Hole pupfish (Cyprinodon diabolis). 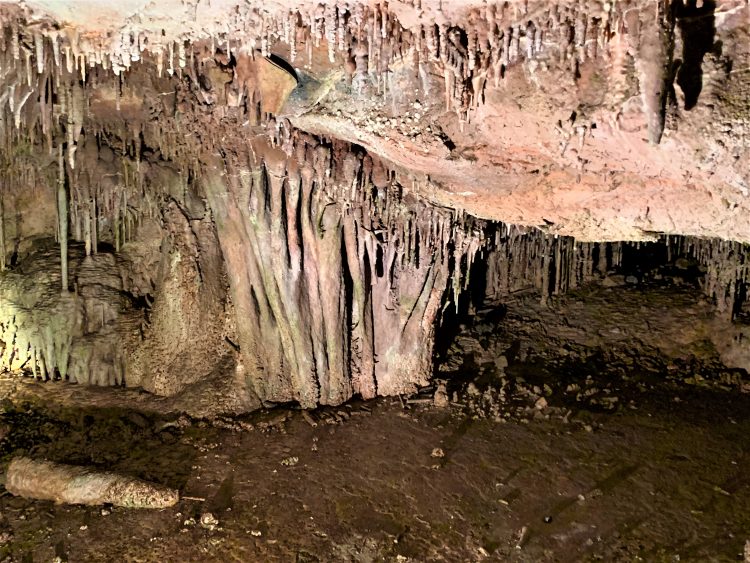 The Lehman Caves were originally protected as a National Monument in 1922, which was combined with the national park in 1986.

According to the National Park Service, the caves were, most likely, discovered by Absalom Lehman in 1885.

Several living creatures occupy the Lehman Caves. Bacteria are the most common. Crickets, spiders, pseudoscorpions, mites, and springtails may live their full lifecycles in the cave. They are dependent on organic material packed in by other animals or washed in from the surface.

Other animals use the cave but must leave to forage for food. These include chipmunks, mice, pack rats, and several species of bats. Only insectivorous bats occur in the Great Basin. At least 10 species of bats have been found in the vicinity of Great Basin National Park, including Townsend’s big-eared bat.

The Lehman Caves Visitors Center is home to the Forgotten Winchester, a rifle manufactured in 1882 that was found leaning against a juniper tree in the park in 2014.