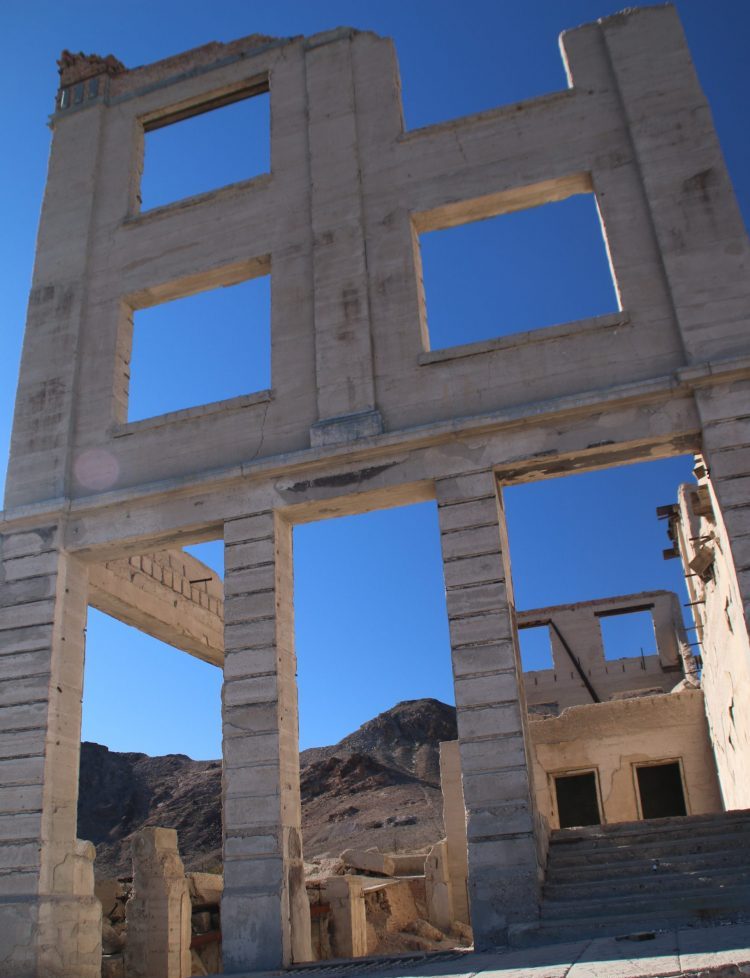 Remnants of the Cook Bank Building in the ghost town of Rhyolite, Nye County, Nevada are seen above and the original structure is shown in an old black and white photo at the bottom of the article.

It is one of the most popular photographed structures in the old Wild West ghost towns. (Learn more about Ghost Towns of the Southwest and Ghost Town in Nevada.)

The construction of the three-story building for the John S. Cook and Co. Bank was started in 1907 and finished in 1908 and cost more than $90,000, which is equivalent to $2,710,000 in 2021. It was one of the earliest buildings in the west to be constructed using a technique that was fairly new using reinforced concrete.

Located on the southwest corner of Golden and Broadway Streets in Rhyolite, in its heydey, it was the tallest and most prominent building in the town with luxury materials such as the Italian marble for the stairs, imported stained-glass windows, mahogany woodwork, indoor plumbing, electrical lights, telephones, and other luxurious materials. In addition to all the luxury, the building was home to two vaults (I wonder where those ended up!).

Once constructed, Cook Bank Building was used to guard over $200,000 of wealth, which is equivalent to $4 million today. 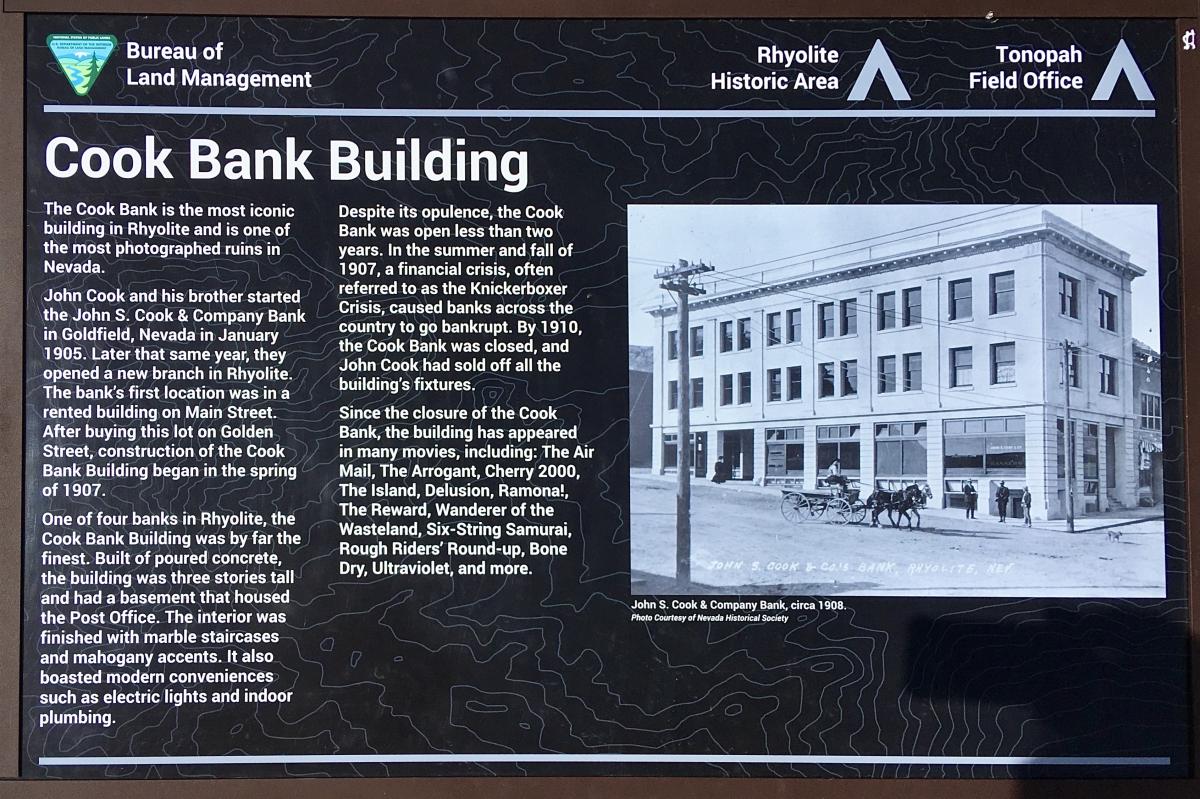 The Cook Bank is the most iconic building in Rhyolite and one of the most photographed ruins in Nevada.

John Cook and his brother started the John S. Cook & Company Bank in Goldfield, Nevada in January 1905. Later that same year they opened a new branch in Rhyolite. The bank’s first location was in a rented building on Main Street. After buying a lot on Golden Street, construction of the Cook Bank Building in the spring of 1907.

One of four banks in Rhyolite, the Cook Bank Building was by far the finest. Build of poured concrete, the building was three stories tall and had a basement that housed the Post Office. The interior was finished with marble staircases and mahogany accents. It also boasted modern conveniences such as electric lights and indoor plumbing

Despite its opulence, the Cook Bank was open less than two years. In the summer and fall of 1907, a financial crisis, often referred to as the Knickerboxer Crisis, caused banks across the country to go bankrupt. By 1910, the Cook Bank was closed and John Cook had sold off all of the building’s fixtures.

Since the closure of the Cook Bank, the building has appeared in many movies including: The Air Mail, The Arrogant, Cherry 2000, The island, Delusion, Ramona!, The Reward, Wanderer of the Wasteland, Six-string Samurai, Rough Rider’s Round Up, Bone Dry, Ultraviolet, and more. 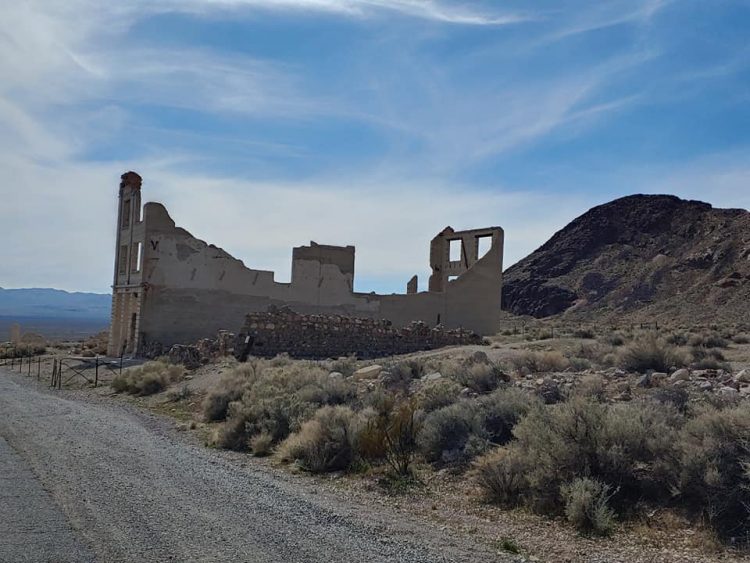 The Rhyolite historic townsite is maintained by the Bureau of Land Management.

The Cook Bank Building in Movies

The ruins of the Cook Bank building have been used in music videos (one being Alanis Morissette) and has also been used in the following films:

There are at least 8 other markers within 4 miles of this marker:

A Look at John S. Cook

A quiet man of few words, John was hired as a cashier at a bank in Tonopah, Nevada for George Nixon. He was known as a man who when he did have something to say, it was to the point yet courteous.

Nixon, along with George Wingfield, were investors in Goldfield mines, and to gain power with the mine owners, they needed a bank for them. In January 1905 the John S. Cook bank opened its wooden shake doors near the Palace Saloon before moving to the Nixon Building later that year and was receiving deposits between five to six million dollars!

In 1907 the country was suffering financial setbacks, which affected the Goldfield banks when depositors created a run on all its banks to withdraw their money. October 1907 would be the Cook Bank’s worse month yet the only Goldfield bank to survive the National Panic of 1907.

Locals considered saloon safes safer than banks and the Cook banking customers took their money to the Rickards Northern Saloon for safekeeping. Rickards in turn took gold, silver, and U.S. currency over to the Cook Bank where it was displayed for all customers to see. This halted the run on the Cook Bank as others closed for good. Until The Depression, the Cook banking system grew to become a powerful financial institution in Nevada.

In 1909 Wingfield wanted to control everything so he bought out other investors in the Cook Bank including John Cook himself and Wingfield’s banking empire failed with the Cook Banks closed for good.

When the business started to fall off in Goldfield, Cook moved to Reno and worked in the Cook Bank there before moving to Los Angeles, California where he died July 22, 1945.

By unknown; photo marked 1908 and “Courtesy of the Nevada Historical Society” without a copyright symbol –  Public Domain, Link

A black and white photograph of the recently opened Cook Bank building in 1908 from the diagonally opposite corner of the intersection. The bank is a three-story white masonry building with many windows on the two visible sides and a door on each side. A cornice wraps around the building at the roofline; the roof is flat. About twelve people are in the street outside the building, along with a car, and three telephone utility poles. A two-story building with awnings is directly attached to the longer side of the bank building (to the right). The road slopes upward to the left, passing a single-story building. Hills are visible in the background.