Named for the ancient diamond mining center of Golkonda in India, Golconda is a small town in Humboldt County, Nevada.

During 1898-1910, the town had a train depot, several hotels, a school, businesses, newspapers, and two brothels.

After the population peaked in the mid-1900s, boosters predicted growth for Golconda, after 1910 the mines played out, leaving the region as an area of ranches and farms.

The settlement had its start when copper, silver, gold, and lead was discovered November 1866.

The population of Golconda NV

Its population peaked at about six hundred in 1907-08 and as of the 2020 census, there are 182 residents living in Golconda, Nevada.

Golconda has a post office, which has been in operation since 1869.

Click here to learn more about how time zones may impact your travel, Southwest Time Zones.

The community lies east of Winnemucca across the Sonoma Range and 5.7 miles west of Golconda Summit, a nearby mountain pass on Edna Mountain.

The Osgood Mountains lie across the Humboldt River to the north. 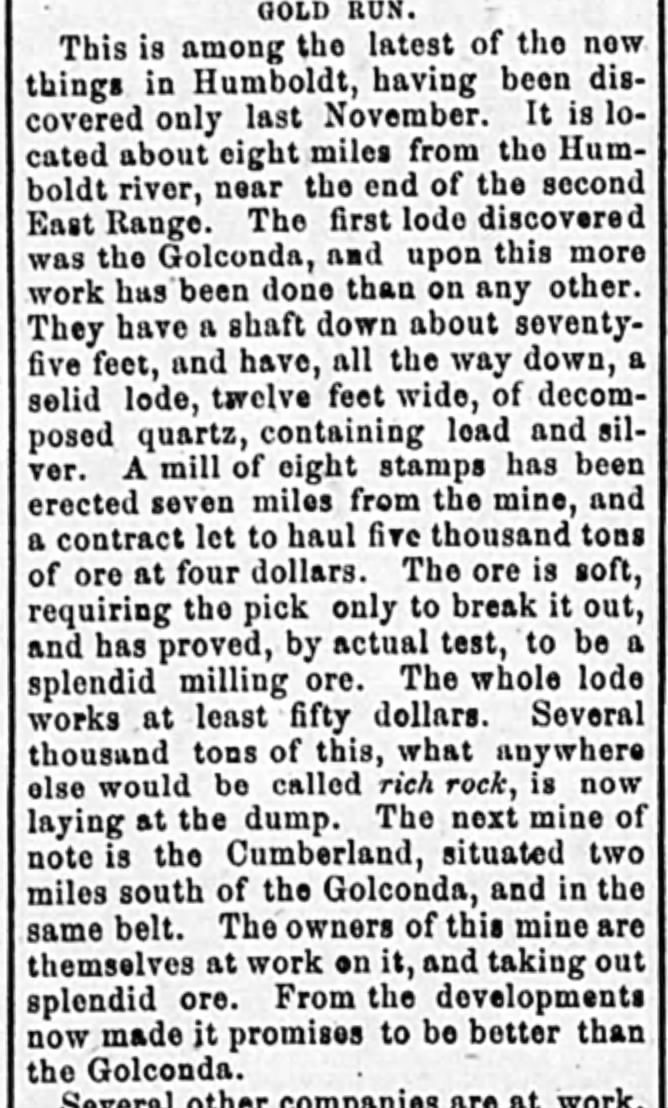 GOLD RUN. This is among the latest of the new things in Humboldt, having been discovered only last November. It is located about eight miles from the Humboldt River, near the end of the second East Range. The first lode discovered was the Golconda, aid upon this more work has been done than on any other. They have a shaft down about seventy-five feet, and have, all the way down, a solid lode, twelve feet wide, of decomposed quartz, containing load and silver. A mill of eight stamps has been erected seven miles from the mine, and a contract let to haul five thousand tons of ore at four dollars. The ore is soft, requiring the pick only to break it out, and has proved, by actual test, to be α splendid milling ore. The whole lode works at least fifty dollars. Several thousand tons of this, what anywhere else would be culled rich rock, is now laying at the dump. The next mine of note is the Cumberland, situated two miles south of the Golconda, and in the same belt. The owners of this mine are themselves at work ·η it, and taking out splendid ore. From the developments now made it promises to be better than the Golconda. Gold Hill Daily News [Gold Hill, Nevada  •  12 Oct 1867, Sat  •  Page 2]