So you’ve got a hold of some permits to go down to Havasu Falls and now you want to know what it’s like camping there right?

Luckily, camping at Havasu Falls is no different than camping at any other campsites for most people but just in case it is, I’ll go through my experiences there to help answer any questions and let you know what to expect.

The campsites start a short walk down from Havasu Falls and extend all the way down to where Mooney Falls begins.

I’m not sure on the exact distance the campsite covers, but it was around a mile long so you won’t have to worry about being pressed for space with other campers.

For those who are tent camping, just about every open space is available for you to set up shop and call it home for the next few days and nights.

Hikers who want to use hammocks instead are able to, just note that some spaces aren’t hammock compatible because they lack the trees around to support a hammock. If you can’t decide on which to bring, click here to help you decide whether you want to hammock or tent camp. 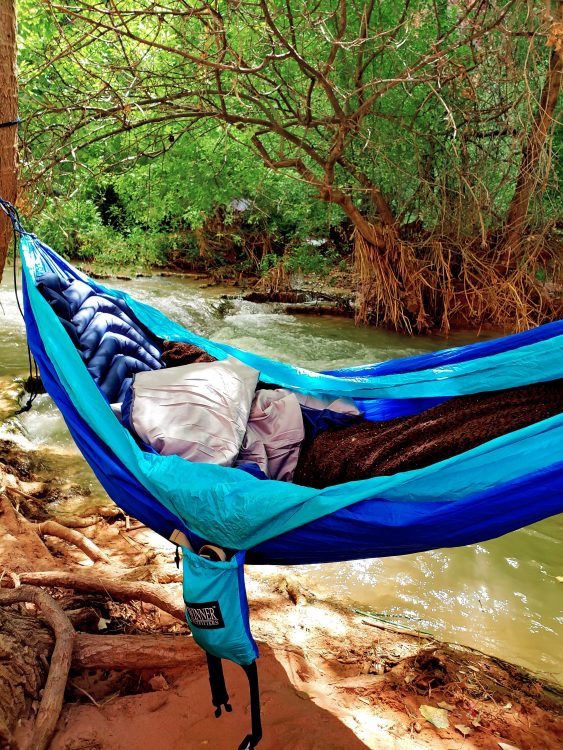 Because the campsites are located below Havasu Falls, a river flows through them.

During the dry months, the river is a non-problem allowing for campers to safely camp next to them without the worry of being flooded out.

If you hike in during the wet months, avoid camping on or next to the river if you can due to the unpredictable nature of flash floods.

Even though I said that the river flows through the campsite, there are a variety of options away from the water for those who don’t want to sleep next to it. 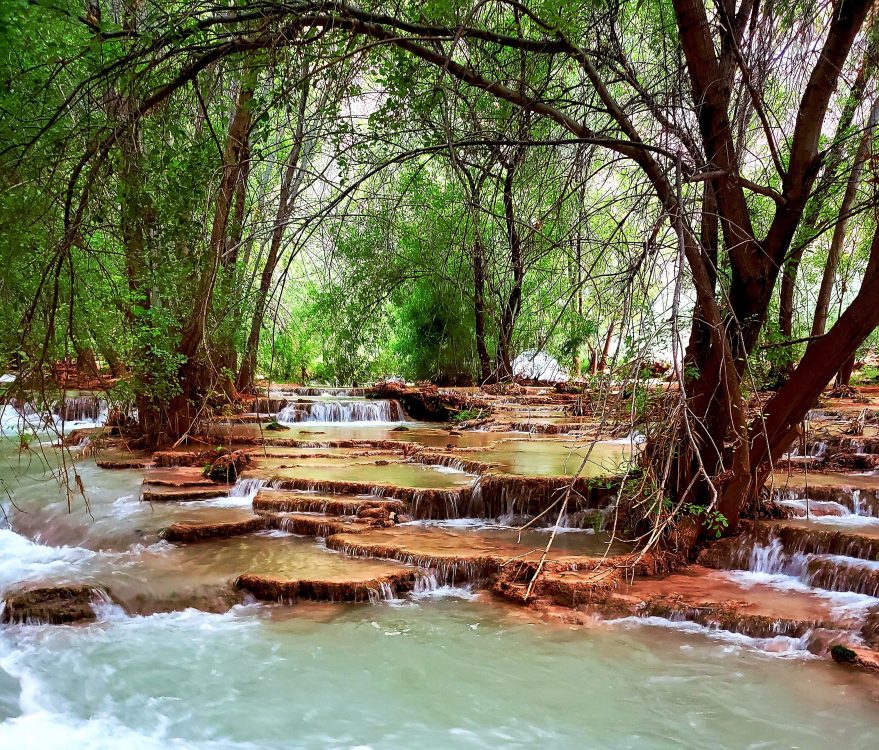 As far as the terrain goes, expect to level out the ground for tents and remove any big rocks that may cause an issue when setting up. Usually, if you take a highly trafficked spot, it’ll be mostly set up ready because of previous campers doing the work for you. If you decide to do what we did, which was camp a little further down and off the path, be prepared to have to do a little campsite grooming.

With the Havasu Falls being located in a canyon, many expect a barebones, no-nonsense experience and while that can be mostly true, the campsite does have some basic amenities.

Tables are provided at most of the spots for campers to use, just note that some tables may have been moved by other campers so you may have to do the same if your spot is lacking a table.

Bathrooms are located the entire stretch of the campsite and will usually have about four toilets with two being male and two being female. The toilets are raised outhouses without running water and have toilet paper provided.

There have been tales of the outhouses running out of toilet paper in between maintenance periods, so it’s best to bring a roll of your own just in case that happens. Disposable wipes are allowed, but be sure that they’re environmentally friendly as the whole point of Havasu Falls is to enjoy the scenery without damaging it with plastics and non-biodegradable materials.

The last and most important thing campers will have access to is water. The campsites water is fed by a spring and is pouring out water nearly 24/7. The water is tested to ensure that it’s safe to drink and cook with.

For those who can’t handle being away from society and social media, the village you pass through to get to the campsite has electricity as well as wifi for you to check your emails and whatnot.

If you don’t feel like making camp food, the village also has a little restaurant that you can buy food as well as two convenience stores.

If you decide to go with that route, get ready to pay for snack items at a premium because all the food has to be flown or hiked into stock the shelves.

Campfires are not allowed any time of the year.

Even if you’re from a state that has legalized marijuana, it is still a federal offense to take it to a natural park as well as a tribal offense so it’s best to leave it at home.

Cigarettes are allowed, just be sure to dispose of the butts and do it away from anyone who may be sensitive to the smoke.

Drones are not allowed in the village, on the campsite, or at the falls unless you have a special permit from the tribal council or tribal chairperson.

There are rules that are more specific so to get the complete list, click here to read the official Havasupai Tribe Law and Order Code.

Things to Keep in Mind

Even though this seems like a random place in the middle of the Grand Canyon, it’s still home and a way of life for an entire tribe of people, so be respectful to their rules so that they continue to allow us to camp and hike there.

All trash that is brought in has to be taken out as there are no trash cans at the campsite for you to throw stuff away. People in the past have left their garbage behind but like I said before, respect the surroundings and don’t ruin it for the rest of us because of laziness.

Another thing to note is that there is wildlife down at the campsite with it mainly being birds, deer, and squirrels. While they may seem innocent, the squirrels are masters at getting into your food at night or while you’re out camping. If you want some help on animal proofing your campsite, click here.