Hiko, Nevada, is a “semi-ghost town” that is situated in the Pahranagat range of mountains in Lincoln County, Nevada. Also spelled Hyko, it is supposedly a Shoshone term that means either “white man” or “white man’s town.”

Today, there are several buildings from the mining era.

The town was founded by William Raymond when he purchased several of the twenty-six mines in the Pahranagat Valley area. Using capital, he purchased the machinery needed for a five-stamp mill, which he shipped via the Colorado River to Calville and then headed 140 miles north by oxen to deliver the machinery. Once the mill was built, he laid out a townsite. In addition to the mill, Raymond established roads and buildings to the tune of almost a million dollars for a venture that would eventually fail. 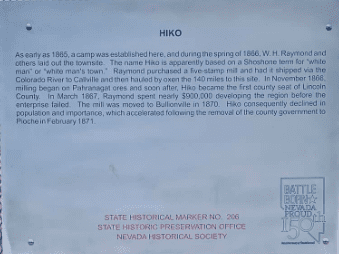 As early as 1865, a camp was established here and in the Spring of 1866, Colonel W.H. Raymond and others laid out the townsite. Hiko, situated in the Pahranagat range of mountains, is an Indian expression for “white man’s town.” Raymond, with Eastern capital, purchased the machinery for a five-stamp mill and had it shipped via the Colorado River to Callville, then hauled by oxen the 140 miles to this site. In November 1866, milling was begun on Pahranagat ores and soon after, Hiko became the first county seat of Lincoln County in March 1867. Raymond spent nearly $900,000 building roads, erecting dwellings, setting up the mill, prospecting, and mining before the enterprise failed. The mill was moved to Bullionville in 1870 and consequently, Hiko declined in population and importance. The decline was accelerated after the removal of the county government to Pioche in February 1871.

The Population of Hiko Nevada

Visit nearby Crystal Springs which was also inducted in 1976 as Nevada Historical Marker #205.

The Best Time of Year to Visit Hiko Nevada

Hiko has mild spring and summer but cold winters. The best time of year to explore Hiko is late spring through early fall.

Things to Do in Hiko Nevada