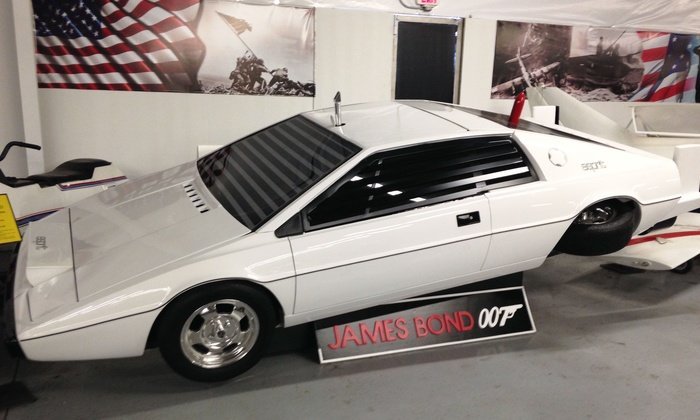 Step back in time and enjoy the movie cars that you grew up with such as The Love Bug to the cars seen in popular movies such as Back to the Future and more.

The tour of the Hollywood Cars Museum takes about 30 – 45 minutes to enjoy.

Inside the 30,000 square foot space, the collection spans several decades of Hollywood movies and shows. Fans of ’60s movies can see the Chitty Chitty Bang Bang car or Herbie from “The Love Bug.” TV viewers will notice the A-Team stunt van and Knight Rider pursuit car. James Bond fans can gaze at the motorcycle, Lotus submarine car, and even an Osprey 5 Hovercraft. The Batmobile from the Michael Keaton era and the neon green Mitsubishi Eclipse drove by Paul Walker in the “The Fast and the Furious” are also part of the diverse stock.

The Hollywood Cars Museum features some of the most recognizable and unique cars used in the entertainment industry. In addition to the vehicles featured in Tim Burton’s “Batman Returns,” “Knight Rider” and “Back to the Future,” you’ll also see “Robocop” cars and TV commercial cars such as Taco Bell. The Hollywood Cars Museum vehicles have been displayed in more than thirty countries around the world.

Click here to purchase discounted Hollywood Cars Museum tickets. This is a bundle special where you get a pair of sunglasses and two sodas for the Groupon voucher.

Children 16 years and younger are free with paying adult, which are ~$20 per person.

WARNING – the Hollywood Cars Museum takes cash only for the tickets, which are purchased onsite.