Class: Reptilia » What is a Mojave Green Rattlesnake (Crotalus scutulatus) 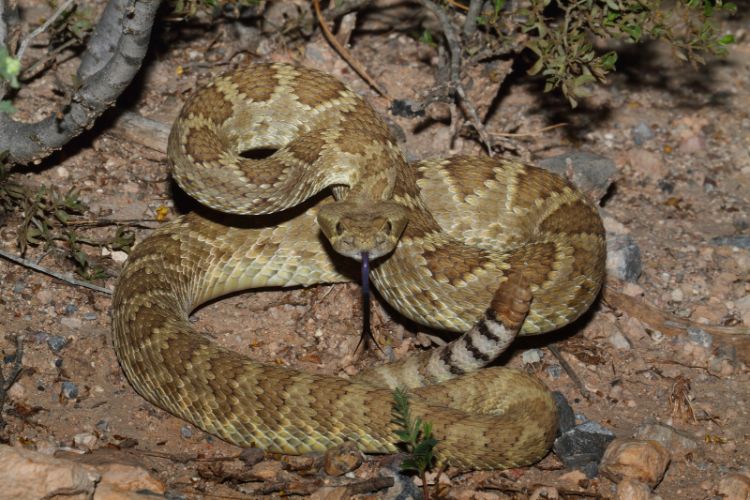 The Mojave Green Rattlesnake is a notoriously venomous snake that is found in the southwest deserts of the United States as well as central Mexico. Known for its bite, the Mojave Green has a venom that contains a potent mixture of neuro and hemotoxins that can cause organ damage and send nervous systems into chaos.

Their venom combination has a special name, the Mojave toxin. The toxin cocktail is more than likely named after the snake itself but it could also be named for the region where the snake is found, the information is scattered at best. Either way, this stuff is nasty.

Given its unique venom, the Mojave Green Rattlesnake is considered by many to be the most potent and dangerous venom of any rattlesnake, even rivaling some cobra species. Now with that being said, dying from this snakes bite is rare if you can get antivenin administered as soon as possible.

Like most rattlesnakes, the Mojave Green Rattlesnake is not a highly aggressive snake and would rather let you pass by or simply slither away to safety than strike you. The only time a rattlesnake will strike at you is if it feels threatened, harassed, or if you don’t pay attention to its iconic rattle.

I personally would say that the word defensive is a better way to describe rattlesnakes in general because an overwhelming majority of the time, attacks occur after warnings are given and they feel like there is no other choice. Now to say there aren’t times where a snake could be aggressive would be wrong, but there’s always rare occurrences that happen in the wild.

To say that they’re aggressive implies they wake up every morning looking to bite humans or large prey. These snakes know their limits and know humans are far too big to mess with or even eat, so why risk injury or death when they can hide or slither away.

Give the snake its space and pay attention to the warning signs and you’ll make it through your hike or camping trip just fine. You’re in their house, they’re not in yours.

The back of this rattlesnake features a well-defined array of dark diamonds descending towards the center of its back. This pattern is further ameliorated with light borders, clearly offsetting the dark tone in the middle.

Coming further down, the Mojave Green’s tail has a pattern of white and black bands on it, with the white bands being prominently broader as compared to the black bands.

This species is often confused with the Western Diamondback Rattlesnakes.

To distinguish Western Diamondback Rattlesnakes from the Mojave Rattlesnake species, it must be noted that the latter has relatively narrower black bands on its tail, with its upper white eye stripe extending beyond its mouth corner.

The adult Mojave Rattlesnakes range from 2 to 4 feet in length.

This rattlesnake species is an active nocturnal predator, which means that they usually search for prey during the night time.

The Mojave Greens have a fairly broad food choice, which starts from kangaroo rats and lizards and escalates all the way up to rabbits, toads, other snakes, some insect species, and even bird eggs in some habitats. However, a University of Texas research claims that the kangaroo rat is the favorite prey choice of Mojave Green Rattlesnake.

The Mojave Green hunts while moving or by setting up an ambush while resting. The unsuspecting prey is swallowed as a whole once it gets attacked by the snake.

The species makes active use of abandoned rodent burrows as its birth sites.

Although the number may vary between 2 to 17 hatchlings per cycle, the average figure comes around to 8. The newly hatched Mojave Greens may measure up to 25 centimeters or 10 inches from head to tail end.

As the name suggests, the Mojave Desert is the prime habitat of this rattlesnake species. However, significant populations of the Mojave Green Rattlesnake are also found all over Arizona, Nevada, Southwestern Utah, Southern New Mexico and even some parts of Texas.

The members of this species usually prefer lower mountain slopes and high desert habitats. It is found between 500 to 5000 feet in elevation, with a strong preference for desert flats over rocky habitats or thick vegetation areas.

The Mojave Green Rattlesnake will live to be about 12 to 13 years on average while surviving almost 20 years in captivity.

As of writing this, the Mojave Green Rattlesnake is not a protected species as their population is considered stable.