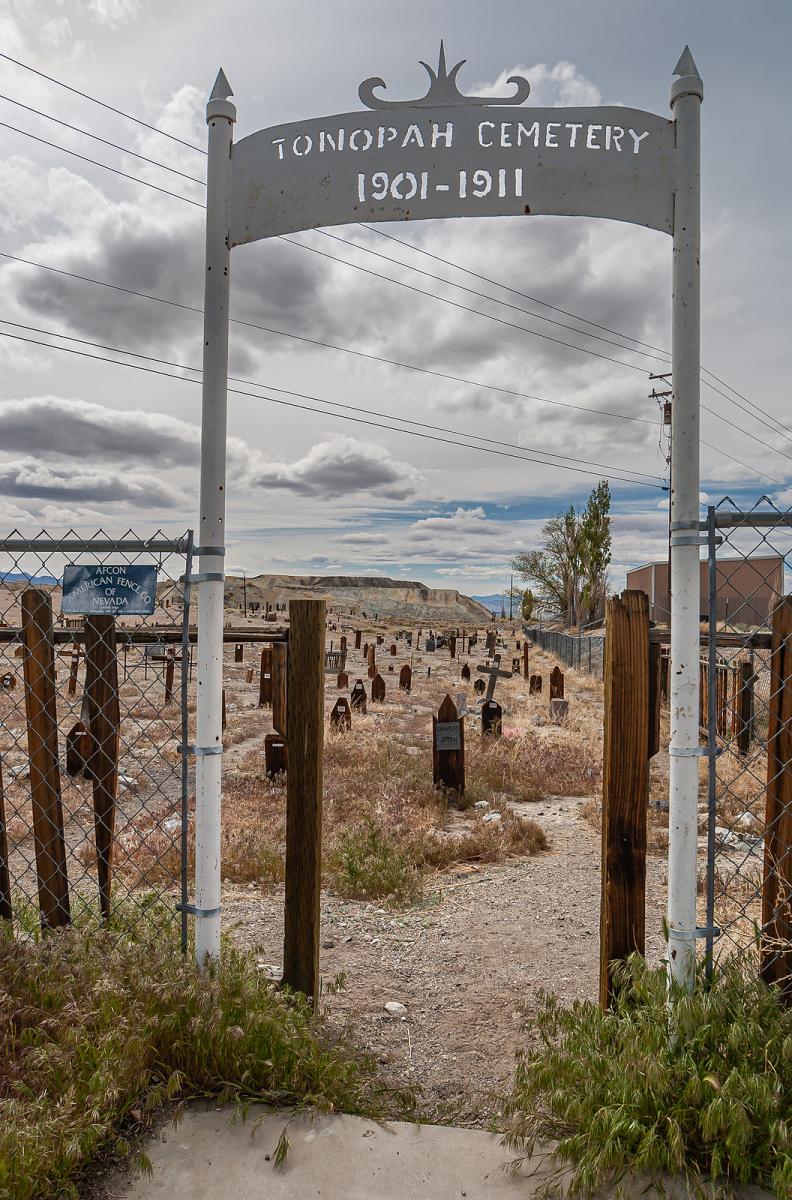 Tonopah, Nevada, US – Historic Cemetery. Portrait of the white metal entrance gate to the graveyard under gray cloudscape and many redwood tombstones.

These are just a few words that people have used to describe their experience while visiting the Old Tonopah Cemetery and surrounding sites.

Many resources state that there are about 300 people buried in the Old Tonopah Cemetery but if you look at the website Find A Grave, they show 476 with the first burial of Vincent Davis on December 17, 1900, but historical information says the first person was John Randel Weeks. The last person in 1911 was John Mulholland on December 24, 1991. There are a few people buried after 1911 from the years 1919 to 1996.

From the Tonopah, Nevada website, myths about the Old Tonopah Cemetery:

Myth #1: The old cemetery closed due to being overcrowded.

Fact: The old cemetery closed as the tailings of the Tonopah Extension Mine kept washing over the graves, destroying headstones. The Mine was planning an extension of its operation and wanted to prevent the cemetery property from expanding. They donated the property of the “new” cemetery that is still in use today.

Myth #2: A lot of the people buried in the cemetery died due to a “mysterious plaque”, also known as the “Tonopah plague”, that occurred in 1902.

Fact: The “plague” was a huge number of deaths in 1905, not 1902, due to pneumonia and was assumed to be a result of a lack of sanitation, especially close to the slaughterhouses. 56 people died between January and April, according to the Secretary of State Board of Health in his report to Governor John Sparks. After an article in the San Francisco Call about the pneumonia scourge in Tonopah in 1901/1902, the Tonopah Daily Bonanza replied with a correction, arguing that they find the 27 deaths due to pneumonia between May 1901 and January 1902 in relation to a population of 1,500, not a heavy mortuary rate. There is nothing mysterious about the pneumonia cases in 1901/1902 or 1905 as they were well documented in the local newspaper.

Myth #3: Headstones have always listed the cause of death.

Fact: The cause of death was added in recent decades based on historic research conducted by historian Allen Metscher of the Central Nevada Historical Society. The cause of death was not listed on the original headstones. Only about 30% of headstones are original. Many headstones were rebuilt by the Tonopah Conservation Crew, under the guidance of Metscher, with old material, giving them an original look. Many of the graves were marked by Metscher using dousing rods, an old technique employed to locate groundwater or other disturbances in the ground such as gravesites. The technique proved to be accurate when the plot map was found years later in an attic in Round Mountain in the late 1970s. 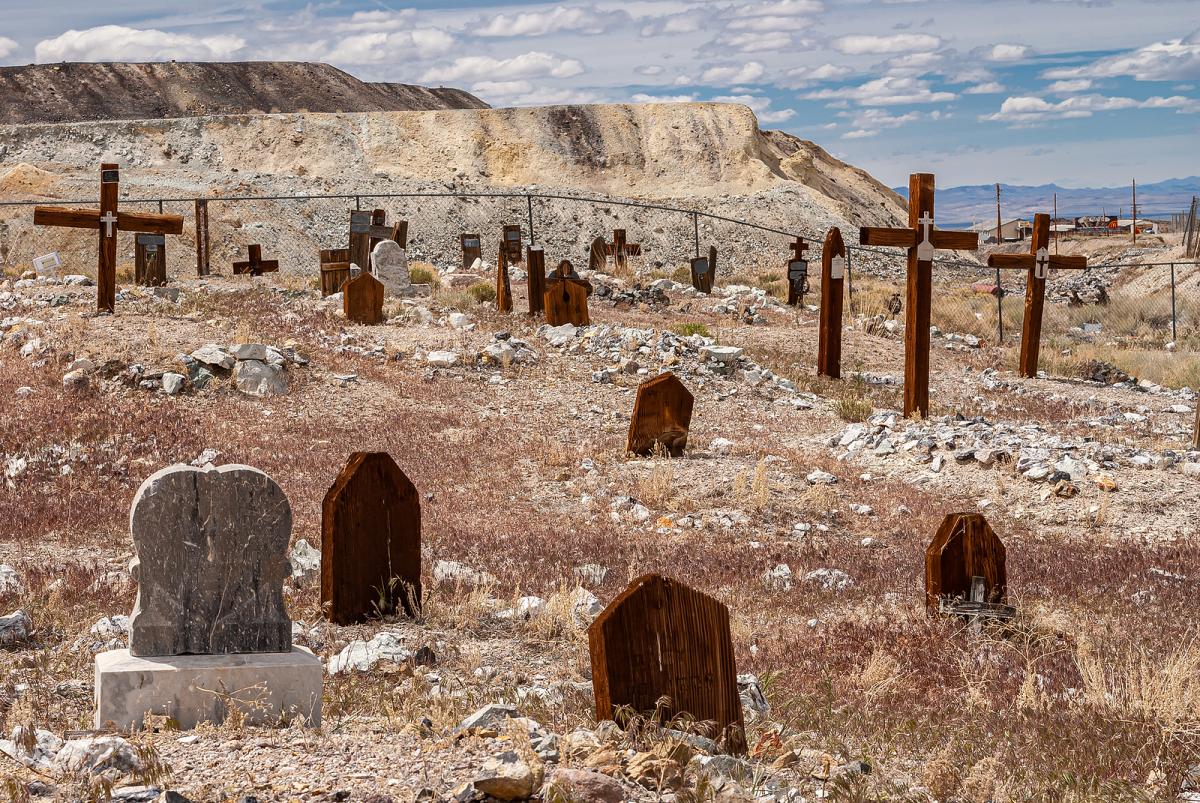 Tonopah, Nevada, US – Historic Cemetery. Different styles of redwood and stone tombstones on the dry rocky desert floor under a blue cloudscape. Hills on the horizon. 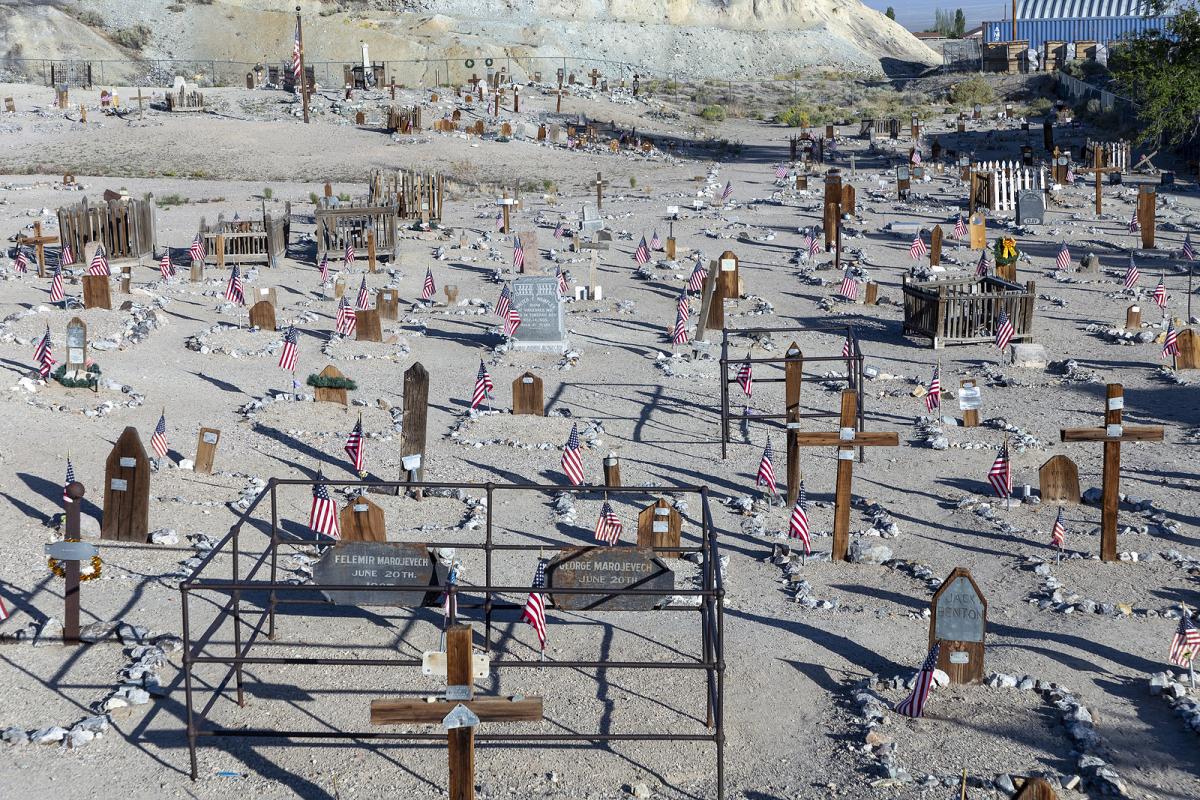 Tonopah, USA –  an old cemetery in the small town of Tonopah. The historic cemetery is not in use nowadays.

How to Get to Old Tonopah Cemetery

The Old Tonopah Cemetery is located within the Pacific Time Zone, the same as Las Vegas.

The timezones change in the Southwest so be sure you know what time it is where you are: Southwest Time Zones

The Old Tonopah Cemetery is open 24 hours a day, 7 days a week.

Admission to the Old Tonopah Cemetery is free.

The historic attraction resource depends on donations so if you are able to, contribute to help with historic preservation efforts like maintaining and labeling graves that are otherwise lost to time and elements. 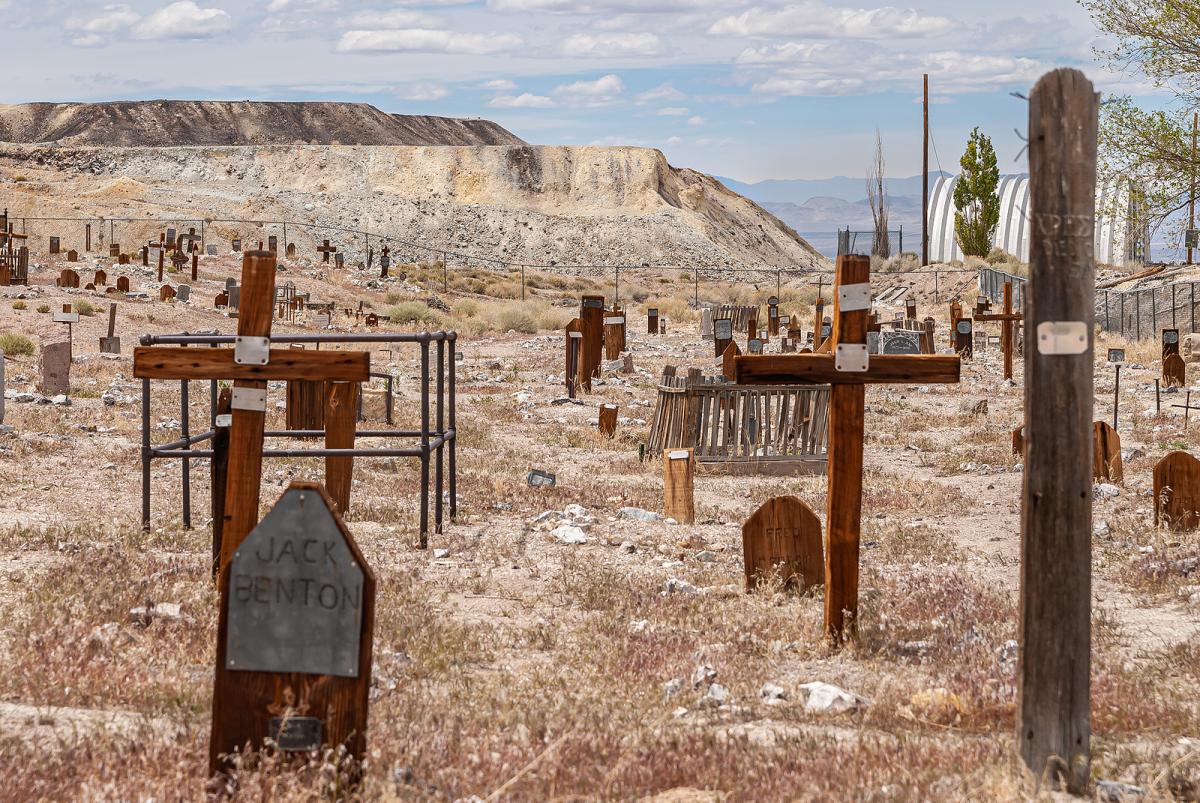 Tonopah’s Sheriff Tom Logan was shot and killed while trying to assist a saloon matron of the Jewel House in the Manhattan Red Light District (40 miles northeast of Tonopah) who was being harassed by a drunken gambler, Walter Amphiloque Barrieau. Logan attempted to remove the gambler peacefully but the gambler pulled out a gun shooting Logan five times. According to his great­ granddaughter and author Jackie Boor, Logan was unarmed and dressed only in his nightshirt. His last act was to prevent the piano player from shooting his assailant, who was later acquitted of the murder. Logan was cited with making early Tonopah “the most peaceable mining camp in the world.”

He was an eight-year veteran with the Nye County  Sheriff’s Office. He left behind his wife and eight children.

Brothers Felemir and George Marojevech were both killed at the Belmont Mine on June 20th, 1907 due to a horrific accident while George was visiting his brother “Frank.”

While the two brothers were talking, Frank realized that a loaded ore cart was coming down the hill and tried to stop it by jumping on the cart to pull the brake handle. Unfortunately for Frank, the brake was replaced with an old shovel handle and didn’t work. Frank fell under the cart, killing him instantly. George attempted to save him but the ore cart ran over his ankles which caused both of his legs to be amputated. With the injuries too severe, he died later in the night.

The first African American in Tonopah, a political leader, and local business owner of the Eureka Saloon. Known for being a prankster and loved by the community, unfortunately, his personal life was a bit darker than his public life as it was stated by a few locals that George was an abusive husband, which caused his wife Ruth to enter the saloon and shoot George on June 22, 1907. Rumormill has it that he’s still pranking people and he’s carrying out jokes at the Tonopah Liquor Company.

Supposedly, the Tonopah Liquor Company is also home to Hattie, a former brothel employee, and barmaid.

New Yorker Bina Verrault was running from the law and ended up in Tonopah, Nevada where she ended up dying in 1907. Bina and her friend Izella Mason Browne ran a “Love Syndicate” by claiming to be rich widows and would seduce rich men into giving them approximately $100,000 ($2.5 million in today’s dollars) of expensive gifts and money. One man fell in love with Bina but she didn’t return the love (or his gifts), he went to the authorities, and Bina was arrested. During her trial, she pawned some diamond rings and fled and found herself in Tonopah about a year later where she died of alcoholism. Her death made headlines around the world.

Three Merten brothers died within 2 years of each other between September 1908 and July 1910. First, Albert Merten died of typhoid fever, then Sam Merten was killed in an accident in the Montana Tonopah Mine, and then William Merten who was the last brother to pass away at 17 years of age of heart failure.

Son of Thomas Murphy, Big Bill died while trying to save the lives of others during the Belmont Mine Fire on February 23, 1911. On the last trip, from which he never returned, Big Bill said, “Well, boys, I have made two trips and I am nearly all in, but I will try again.”

On Main Street in front of the post office is a statue honoring Big Bill and there is also a mural depicting the funeral procession, which took place during a blizzard.

At the Mizpah Hotel, there is the Lady in Red who was stabbed and strangled to death in between rooms 502 and 504 by a jealous ex-lover and continues to haunt the 5th floor as well as the elevator.  Supposedly, if she likes you she may even leave you some pearls.

The Mizpah is also home to several other ghosts, including some very playful children on the 3rd floor and murdered miners in the basement. A previous employee of the bank died in the old safe in the basement, and it is believed he is the one haunting the building.

There are several options to complete your “scary” exploring as the local lodging has a history of being creepy, haunted, and bizarre…, stay and let us know how you would describe them! 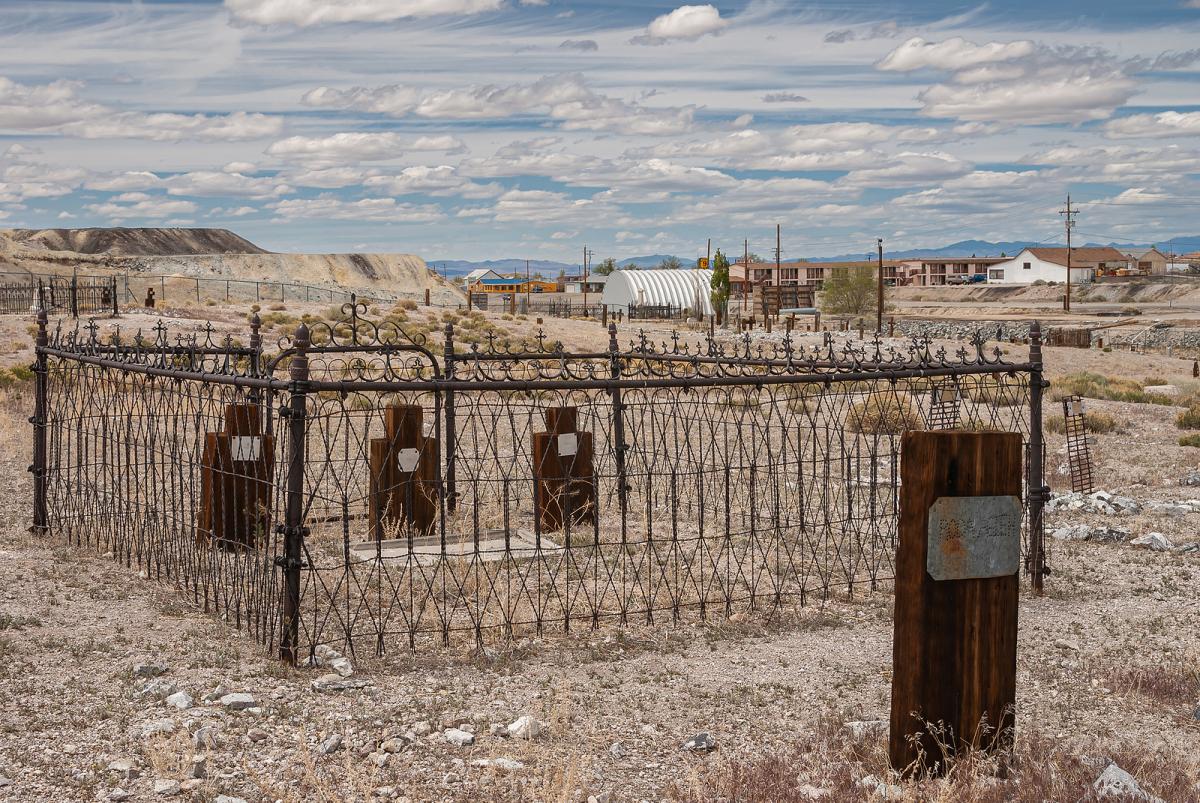 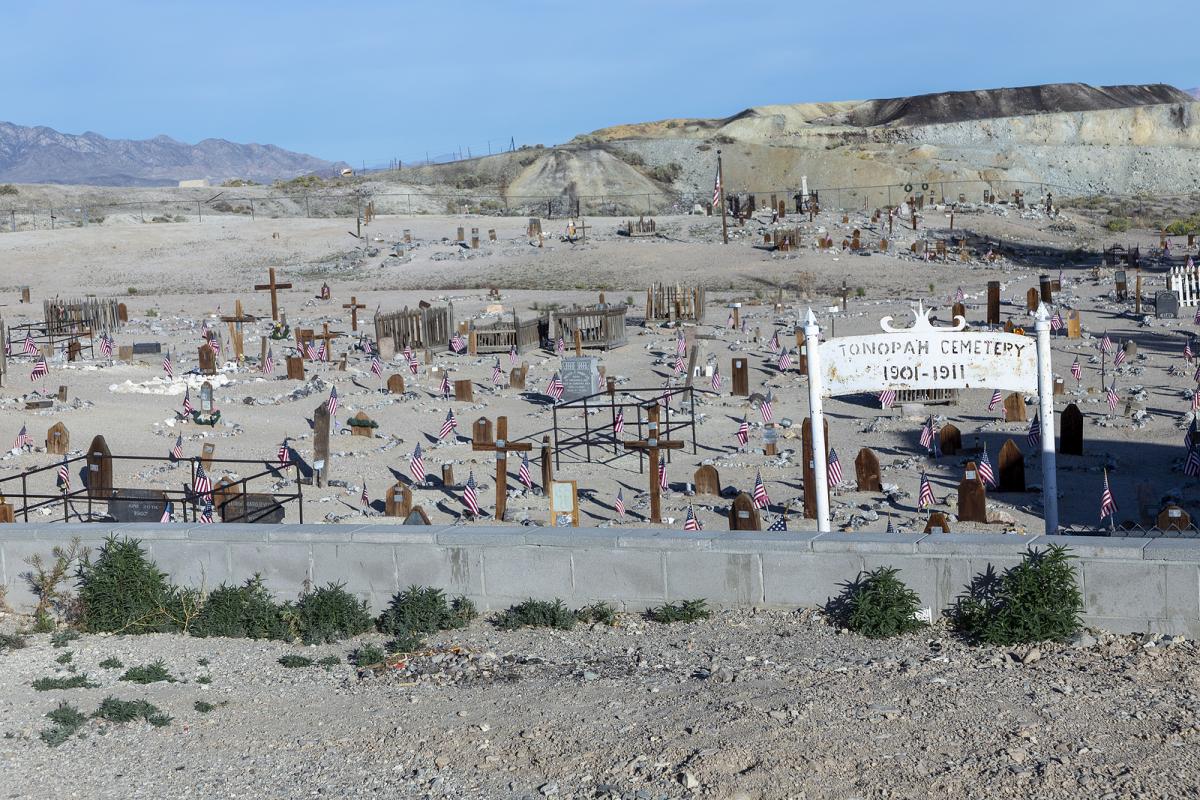 Tonopah, USA –  old cemetery in the small town of Tonopah. The historic cemetery is not in use nowadays.