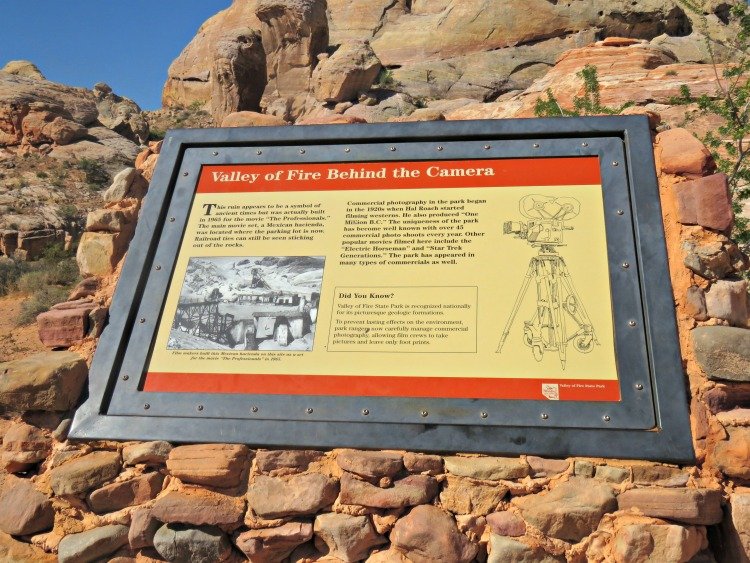 Driving through the Valley of Fire and you think to yourself the scenery looks familiar?

Its probably because the Valley of Fire is a popular location for shooting automobile commercials, other commercial photography, and has provided a setting for the several films and television shows.

According to a sign at White Domes, the uniqueness of the park has become well known with over 45 commercial photo shoots every year.

Trekkies (or Trekkers) who explore the area may recognize the area of Silica Dome used for Star Trek fans as the site of iconic starship captain James T. Kirk’s death and burial.

Below are the movies that we know about that used the Valley of Fire as their unique landscape to film.

Confessions of a Hitman

The scenes from planet Veridian III from Star Trek Generations were filmed here in 1994.

The Silica Dome is particularly highlighted for Star Trek fans as the site of iconic starship captain James T. Kirk’s death and burial.

Released in 1976, The Electric Horseman was produced by Universal Studios and stars Robert Redford, Jane Fonda, and Willie Nelson.

Sonny Steele used to be a rodeo star, but his next appearance is to be on a Las Vegas stage, wearing a suit covered in lights, advertising a breakfast cereal. When he finds out they are going to drug the horse in case it’s too frisky, he rides off into the desert…

Valley of Fire Behind the Camera

This ruin appears to be a symbol of ancient times but was actually built in 1965 for the movie The Professionals. The main movie set, a Mexican hacienda, was located where the parking lot is now. Railroad ties can still be seen sticking out of the rocks.

Commercial photography in the park began in the 1920s when Hal Roach started filming westerns. He also produced “One Million BC.” The uniqueness of the park has become well known with over 45 commercial photo shoots every year.

Other popular movies filmed here include the “Electric Horseman” and “Star Trek Generations.”

The park has appeared in many types of commercials as well.

The Professionals with Burt Lancaster, Lee Marvin, and Claudia Cardinale was filmed in 1966.

Valley of Fire was one of three locations used in the film.

All that remains of the set is a portion of a rock wall of a hacienda.

They Ran for Their Lives

The outside Mars scenes from Total Recall, starring Arnold Schwarzenegger, were almost totally shot in Valley of Fire.

Viva Las Vegas starring Elvis Presley had multiple shots filmed in the park during the racing scenes for the film’s finale in 1963.