Class: Reptilia » What is a Banded Gila Monster 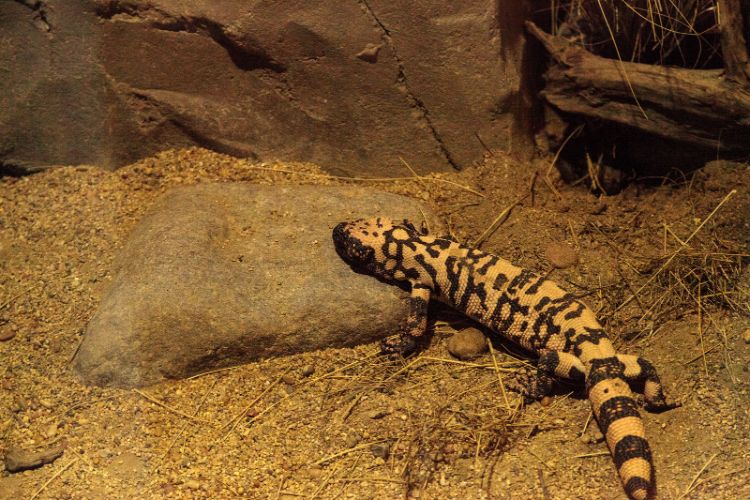 Gila Monsters are lizards with bead-like black and orange scales on their heavy bodies.

Gila monsters spend 90% of their life underground in burrows or rocky shelters. The lizards move to different shelters every 4–5 days up to the beginning of the summer season. By doing so, they optimize a suitable microhabitat for survival. They are active in the morning during the dry season (spring and early summer). Later in the summer, they may be active on warm nights or after a thunderstorm.

During the Gila monster’s active season of approximately 90 days, only ten of those days was the Gila monster active. Gila monsters are slow in sprinting ability, but they have relatively high endurance and maximal aerobic capacity (VO2 max) for a lizard.  They maintain a surface body temperature of about 86 °F. Close to 99 °F, they are able to decrease their body temperature up to 3.6 °F by an activated, limited evaporation via the cloaca.

They are preyed upon by coyotes, badgers, and raptors. Hatchlings are preyed on by snakes, e.g., kingsnakes (Lampropeltis sp.).

Gila monsters are able to climb trees and cacti and even up fairly straight, rough-surfaced walls. 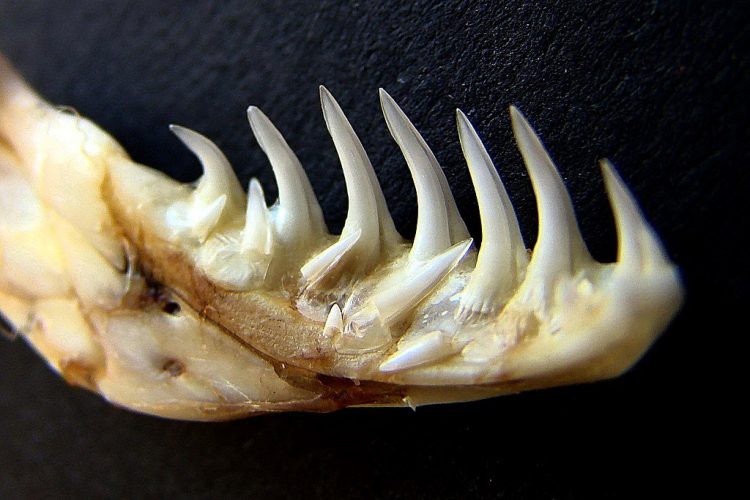 Gila monsters depend on water resources and might be observed in puddles of water after a summer rain.

I am super jealous of friends who have spotted these amazing lizards in Red Rock Canyon as I have yet to see one (guess I need to hike more!).

They avoid living in open areas and inhabit scrubland, succulent desert, and oak woodland, seeking shelter in burrows of other animals, thickets, and under rocks in locations with a favorable microclimate and adequate humidity.

Three to four extensive meals in spring are claimed to give them enough energy for a whole season. Nevertheless, they feed whenever they come across suitable prey.

Hatchlings digest their yolk reserve in winter underground for their energy supply and survival. Young can swallow up to 50% of their body weight at a single meal. Adults may eat up to one-third of their body weight in one meal. This Heloderma sp. uses its extremely acute sense of smell to locate prey.

The strong, two-ended tipped tongue is pigmented in black-blue colors, serves as an orientation, and picks up scent molecules as chemical information to be transferred to the opening of the Jacobson organ around the middle of the upper mouth cavern; information is then immediately transported to the brain to be decoded. Prey may be crushed to death if large, or eaten alive, most of the time head first, and helped down by muscular contractions and neck flexing. After food has been swallowed, the Gila monster immediately might resume tongue flicking and search behavior for identifying more prey such as eggs or young in nests. 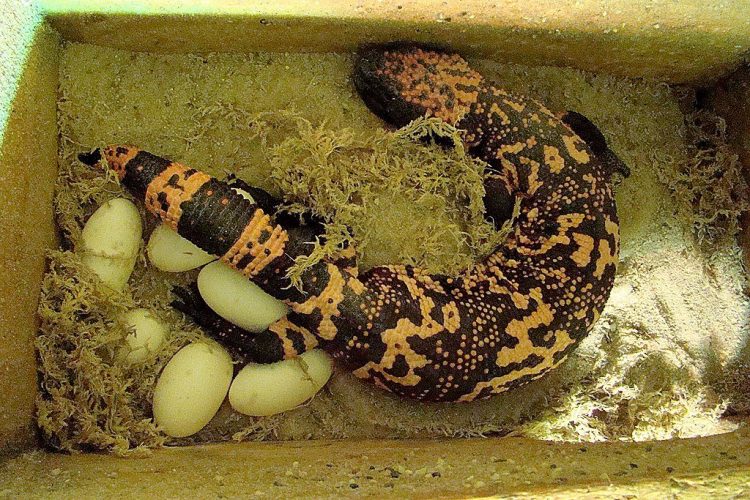 The Gila monster emerges from brumation in early March. H. suspectum sexually matures at 4–5 years old. It mates in April and May.[3] The male initiates courtship by flicking his tongue to search for the female’s scent. If the female rejects his advances, she will bite him and chase him away. When successful, copulation has been observed in captivity to last from 15 minutes to two and a half hours. There is only a single record of attempted mating outside of a shelter. The female lays eggs at the end of May into June. A clutch may consist of up to six (rarely up to eight) eggs. The incubation in captivity lasts about 5 months, depending on the incubation temperature. The hatchlings are about 6.3″ long and can bite and inject venom as soon as they are hatched. The egg development and hatching time of young in the wild have been a subject of ongoing speculation. The first model stated that youngsters hatch in fall and stay underground. The second theory postulated a nearly developed embryo remains inside the egg over winter and hatches in spring. Hatchlings (weight about 1.2 oz) are observed from the end of April to early June.

Discussions of the exact egg development and hatching cycle of the Gila monster came to an abrupt and unexpected end on October 28, 2016, when a backhoe was digging at the outer walls of a house in a suburb of northern Tucson. The backhoe extracted a nest of H. suspectum with five eggs in the process of hatching.

The Gila monster is now known to hatch near the end of October and immediately proceed into hibernation without surfacing. They then appear on the surface from May through June the following year when prey should be abundant. In summer, Gila monsters gradually spend less time on the surface to avoid the hottest part of the season; occasionally, they may be active at night.

Females that have laid eggs are exhausted and thin, fighting for survival, and have to spend extra effort to “reconstitute”. The brumation of Gila monsters begins in October. Gila monsters can live up to 40 years in captivity, though rarely. Little is known about the social behavior of H. suspectum, but it has been observed engaging in male-to-male combat, in which the dominant male lies on top of the subordinate one and pins it with its front and hind limbs. While fighting, both lizards arch their bodies, pushing against each other and twisting around in an effort to gain the dominant position. A “wrestling match” ends when the pressure exerts its forces, although bouts may be repeated. These bouts are typically observed in the mating season. Males with greater strength and endurance are thought to enjoy greater reproductive success.  Although the Gila monster has low metabolism and one of the lowest lizard sprint speeds, it has one of the highest aerobic scope values (the increase in oxygen consumption from rest to maximum metabolic exertion) among lizards, allowing it to engage in intense aerobic activity for a sustained period of time.

This is the only venomous lizard in Nevada.

Banded Gila Monster – Heloderma suspectum HABITAT Arid and semi-arid regions of gravelly and sandy soils; digs burrows or uses those of other animals. SIZE/DESCRIPTION 18 to 24 inches (45 to 61 cm) long; large, heavy body with stout legs and thick, swollen tail. Color: beaded scales, black and pinkish orange FOOD Small rodents, bird eggs, young birds RANGE Extreme southwestern Utah, southern Nevada and California, through southern Arizona and southwestern New Mexico to Mexico. ADAPTATION FOR SURVIVAL Its bite paralyzes, then kills its victims and can be quite dangerous to humans, although it is not an aggressive reptile. Tail stores large amount of fat which is used during poor years. Climbs into shrubs to raid bird nests. COMMENTS Gila monsters and Mexican beaded lizards are the only two poisonous lizards in the world. Poison released through grooved teeth in back of bottom jaw. Poison flows onto floor or mouth when it bites; Gila monster does not release victim but slowly chews as it grips, forcing some poison into the prey. GILA MONSTER IS A PROTECTED SPECIES. Do not to attempt to handle. Seek medical help immediately if bitten.