Class: Pinopsida » What is a Bristlecone Pine (Pinus)

What is a Bristlecone Pine

Bristlecone Pines are a high-altitude, highly resilient tree that grows in the western United States and are considered to be among some of the oldest known living things on Earth. In fact, the Bristlecone Pine holds the record for the oldest non-clonal living species when in 2012 one was found to be nearly 5,000 years old.

These trees thrive where other plants can’t grow such as in those places that have rocky soil or hardly any rain like on top of Mt. Charleston or in the Rocky Mountains. 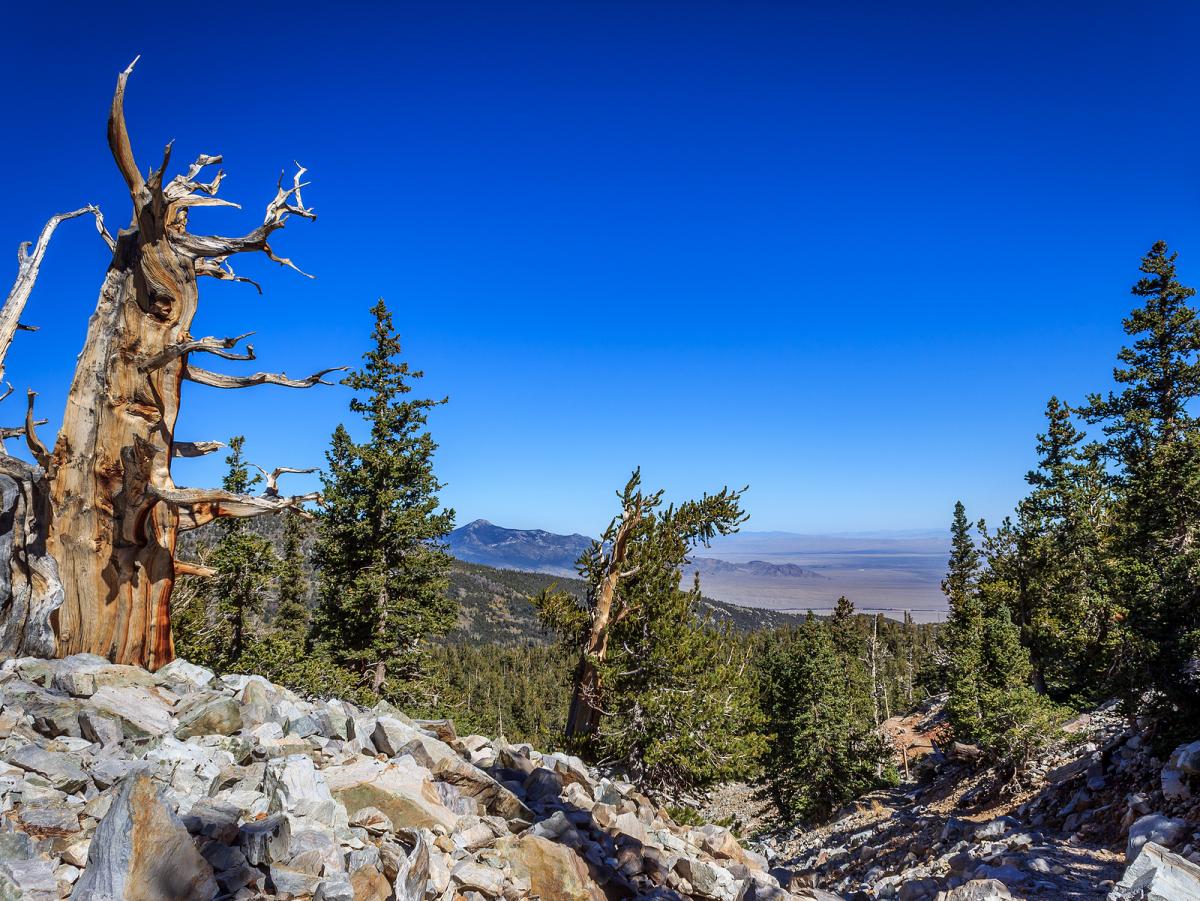 A bristlecone pine grows out of the rock on Wheeler Peak high above the Nevada desert, Great Basin National Park, Nevada, USA

Species of the Genus: Pinus

Pinus aristata is found in Colorado and New Mexico with tiny populations found in the San Francisco Peaks in Arizona. These trees are found at elevations of 7,000 to 13,000 feet and are capable of forming canopies if the conditions are right. What makes these Bristlecone Pines different from the other two is that their pine needles only have one resin canal. While that’s not painfully obvious to a vast majority of people because we simply can’t see it, the one canal causes the resin to build up on the needles leaving white flakes or specks giving it a Christmas look all year round.

Pinus longaeva, known as the Great Basin Bristlecone Pine, is the longest-living Bristlecone Pine species hence the species name, longaeva. The record for oldest Bristlecone Pine is credited to this species with one pine named Methuselah reaching 4,854 years old. The exact location within the Inyo National Forest of this tree is kept secret to protect it from anyone looking to cut down or harm the ancient wonder.

May 26, 2022 Updated: May 29, 2022 1:36 p.m. A 4,853-year-old Great Basin bristlecone pine tree known as Methuselah is growing high at Ancient Bristlecone Pine Forest in the White Mountains of Inyo County in eastern California. It is also recognized as the non-clonal tree with the greatest confirmed age in the world.

This species of Bristlecone Pine can be found in Utah, Nevada, and California and are known for its gnarled, twisted, spooky look.

Pinus balfouriana are only found in California at around 1,950 to 3,500 feet in elevation and while long-lived trees, they can’t compete with Pinus longaeva only reaching to be around 1000 years old on average. These Bristlecone Pines look like a taller version of the previous two species combined but much taller. While the other two species of Bristlecone Pines may only reach a maximum of 20 (aristata) to 50 (longaeva) feet, Pinus balfouriana grows to become 30 to 70 feet tall with some trees reaching as tall as 115 feet. 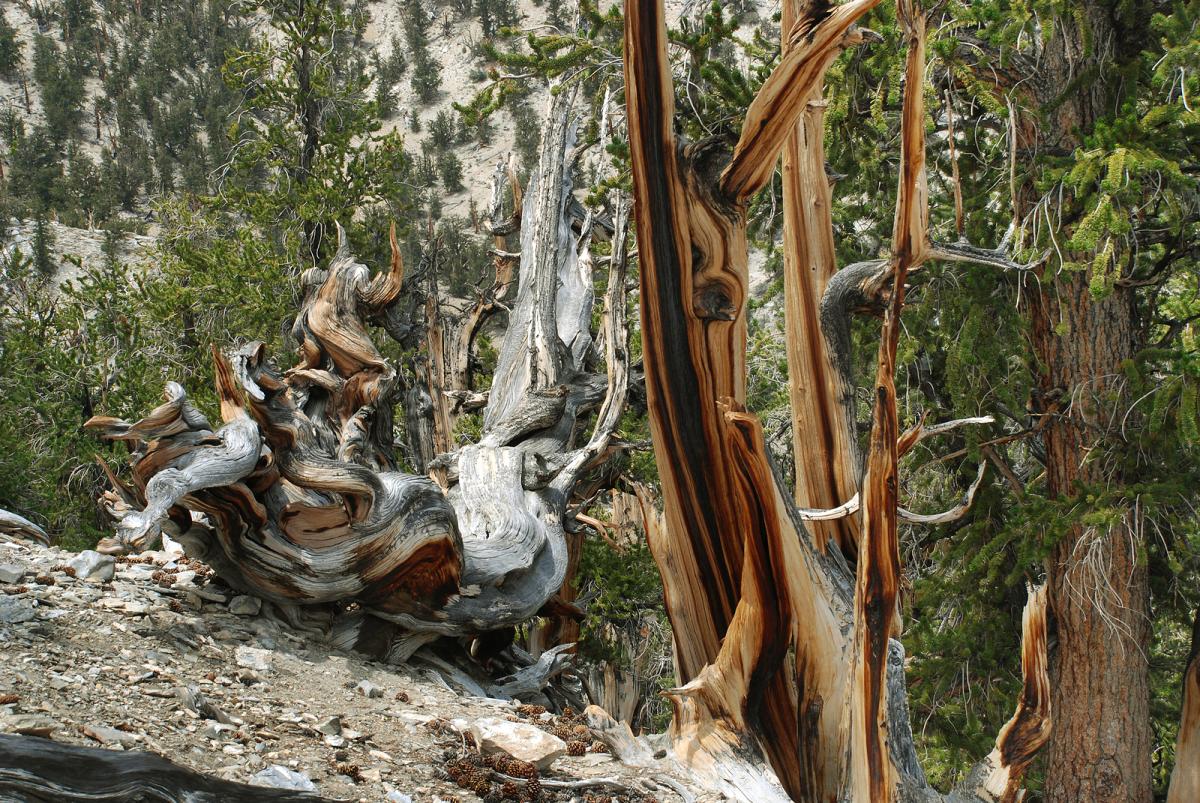 Because these three species of Bristlecone Pines look and grow differently, we will be breaking them down into species sections rather than lumping them together.

Pinus aristata is a medium-sized tree that has greyish brown bark and a wide trunk. The size of the trunk can vary depending on growing or climate conditions if faces on its way to maturity. At the base of the trunk, you can expect to see a scaly look to the bark. If you need to tell the difference between an aristata and balfouriana pine, look at the pine needles. The aristata will have white resin flakes on them.

Pinus longaeva are the poster child for what you see when you google Bristlecone Pine. These trees are also medium-sized but their bark is light, sometimes white, brown and orangish yellow. Like the other Bristlecone Pines, these trees have a scaly appearance to their bark the closer to the ground you look. As you start to climb up the tree, the bark tends to smooth out some. What makes Pinus longaeva iconic is its twisted and contorted trunk, branches, and what can only be described as legs at the base of the tree.

The canopy of this species of pine is a little more splotchy and uneven. What I mean by that is that the pine needles will oftentimes grow like a traditional canopy but there are other times when you see the needles stop about halfway up while the rest of the tree’s trunk continues upward. On top of that, there are trees that just look like standing driftwood that have been twisted and tormented by the seas without any needles on them at all.

Pinus balfouriana is the tallest and narrowest of the bunch with nice and normal brown or dark brown bark. The canopy and needle growth of this tree tend to follow a traditional pine tree in that it has full, or nearly full, needle coverage from the top to about 3/4ths of the way down the tree. Because this species, to me, looks like a combination of the two other species, Pinus balfouriana can have a semi-twisted look to it if you see one without its needles. While it doesn’t look haunted like Pinus longaeva, it has a soft-served look to it. 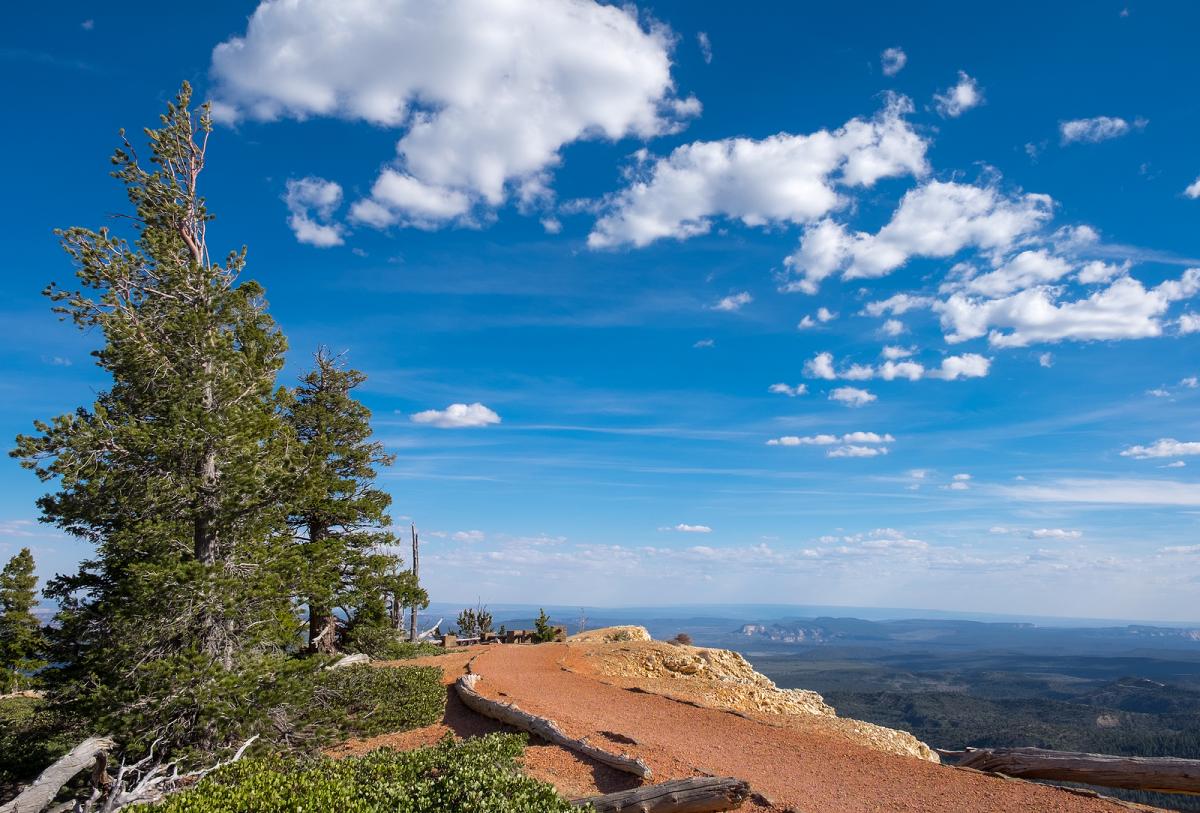 For the length of these trees we will be focusing on trunk width rather than the distance between branch to branch because of how incredibly varied it can be from tree to tree.

The trunk of Pinus aristata is the thickest of the three species growing from 10 to 15 feet wide on average. Pinus longaeva’s trunk is the second largest growing around 8 to 12 feet wide with Pinus balfouriana being the smallest at around 7 feet wide even though it grows the tallest of the three Bristlecone Pines.

As stated before, the height can range from 20 to 115 feet depending on the species of Bristlecone Pine.

For Pinus aristata, you can expect them to grow 8 to 20 feet in height. Pinus longaeva can grow to be 16 to 49 feet tall leaving Pinus balfouriana to be the tallest Bristlecone Pine, growing from 30 to 70 feet even reaching over 100 feet if the conditions are right. 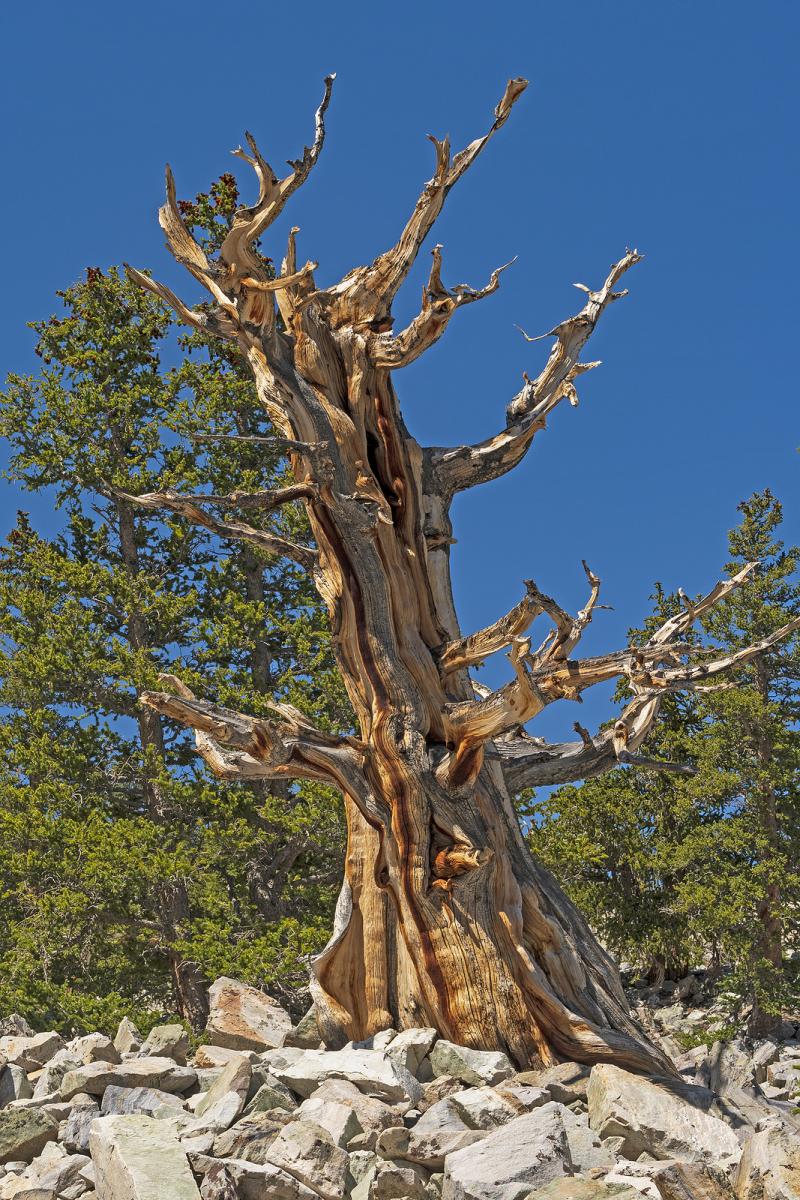 All Bristlecone pines are monoecious which basically means that it has both female and male reproductive parts. These pine trees reproduce from their cones which happens when the male cone produces pollen and the female cone produces ovules which in turn, produce seeds. In order for this to occur, winds need to blow around the Bristlecone pine to shake the pollen-free.

Bristlecone Pines don’t have leaves but they do have pine needles. These needles are dense and grow to be about an inch long in bunches of five needles.

The pine needles of Pinus aristata will have white resin on them. 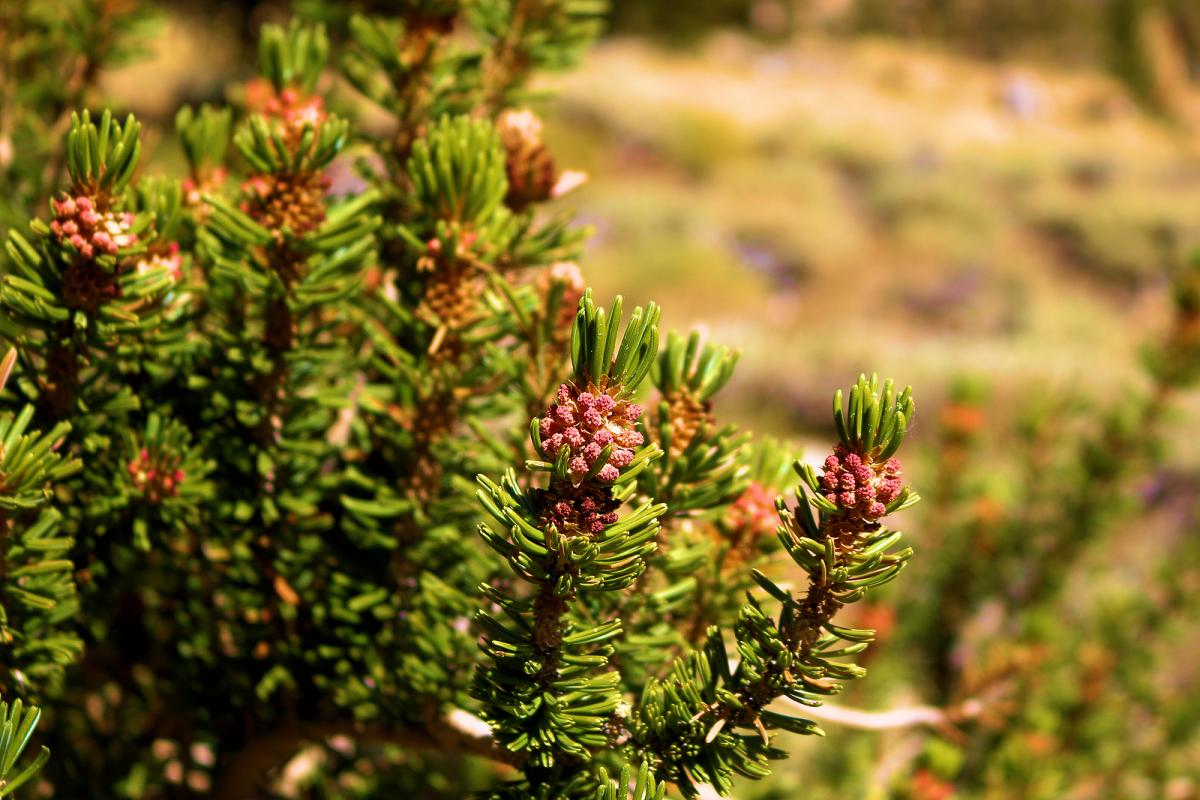 How Long do Bristlecone Pines Live

A long time, relatively. The three species of Bristlecone pine all live to be over 1000 years old but one lives significantly longer than the other two. While it may be the tallest, Pinus balfouriana is the shortest-lived species only living to around 1000 years on average. The oldest known balfouriana tree is around 2110 years old.

The second and slightly longer lifespan species of Bristlecone belongs to Pinus aristata. Only living lightly longer than its 1000-year-old relative, this species will typically live to be around 1,500 years old with the oldest known tree being 2,435.

With the species name of longaeva, you would expect Pinus longaeva to live for a long time and you would be right. This species of tree lives to be a staggering 2,000 years old on average with the record belonging to a tree named Methuselah which is 4,854 years old. There was one tree that was supposedly older than Methuselah at 5,062 years old but the scientist, Tom Harlan, died in 2013 and the tree he pulled the sample from hasn’t been found for study. 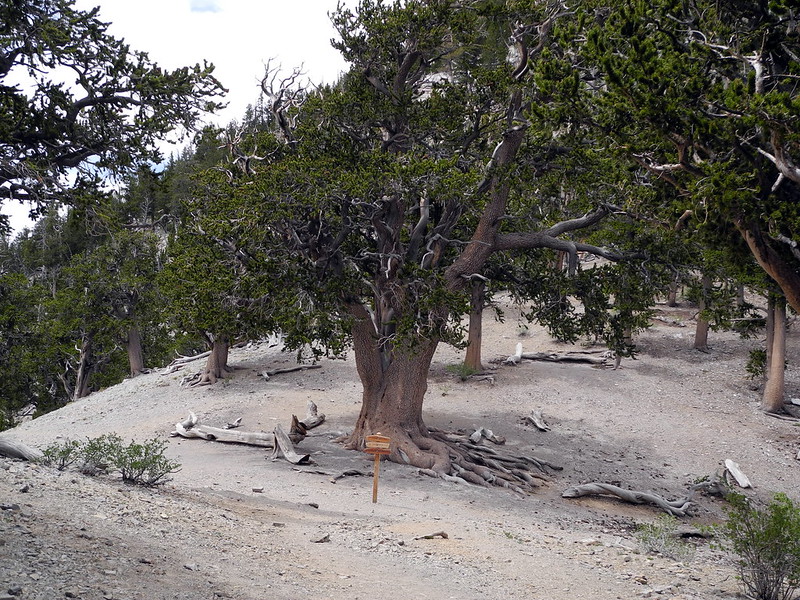 Pinus aristata can be found in Colorado and New Mexico with a tiny population of trees existing in Arizona. The Pinus longaeva lives in Utah, Nevada, and parts of eastern California with Pinus balfouriana growing solely in California.

Bristlecone Pines are protected on federal lands which means if you are at a park in a National Park Service area, do not try and harm these trees because there will be consequences.

You shouldn’t harm these trees regardless of where they’re found because of how long it takes them to grow. 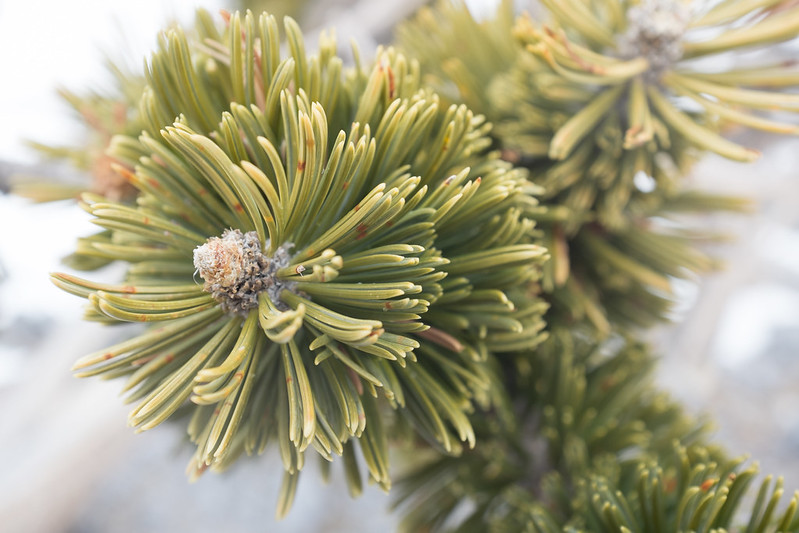 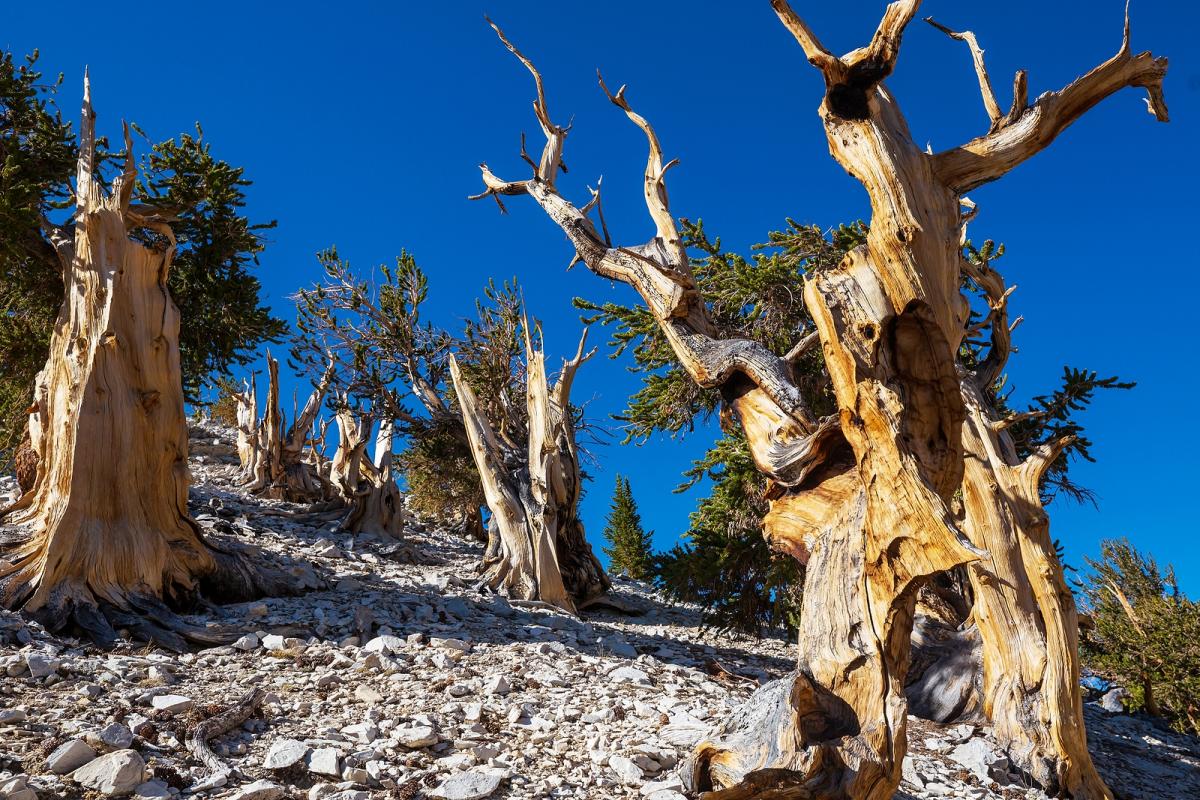 What is a Bristlecone Pine