Desert Animals » What is a Collared Lizard (Crotaphytus collaris)

What is a Collared Lizard

As stated before, the Collared Lizard is easily identifiable from its coloration which can be a combination of bright blue, yellow, orange, and green. The name Collared Lizard comes from the bands of black on its neck making it seem like the lizard has, as the name would state, a collar. 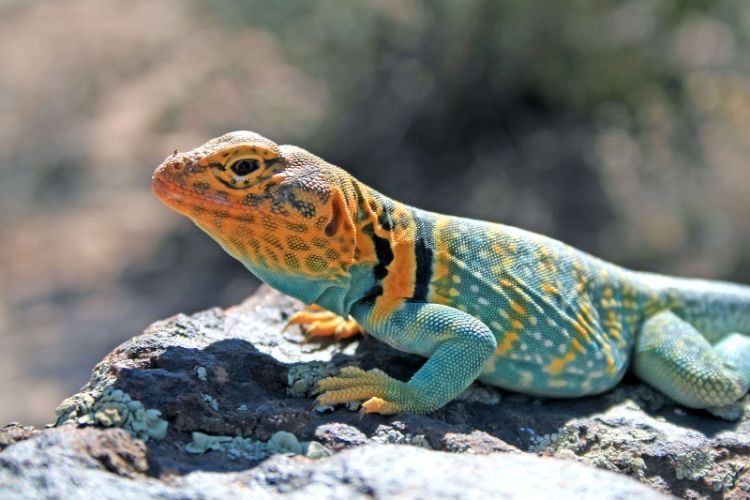 I love the colors of the Collared Lizard above and this guy was used for us to pull our colors from for our website.

Collared Lizards breeding season begins in spring, around March into early April, with eggs being laid in July with some taking as long as October to be laid. During that time, eggs are incubated for 50 to 100 days depending on the temperature.  Female Collared Lizards will lay around 4 to 6 eggs on average but larger females can produce more.

Throughout much of the Great Basin, including southeastern Oregon and adjacent western Idaho, western Utah, Nevada, western Arizona, and southeastern California into northern Baja California.

How Long do Collared Lizards Live

On average, Collared Lizards will live between 5 to 8 years in the wild

As of writing this, the Collared Lizard is not protected by any federal laws or regulations as their population numbers appear to be stable.

Runs on hind legs when frightened. Fearsome appearance and coloring; harmless, but may bite if handled.

Likes to bask on large boulders. Wary and hard to catch during the heat of the day.