Class: Reptilia » What is a Garter Snake (Natricinae thamnophis)

What is a Garter Snake

The Garter Snake is one of the most common snakes to exist in the United States and is what I would consider an SIS, standard issue snake. There’s nothing relatively exciting or crazy about these little guys but that doesn’t make them a bad snake, just a snake, snake.

They are a small or medium-sized snake that likes to hang around water and wet areas and rarely lives too far away from a water source so you won’t really find them in the desert. If you encounter one in the wild, it will more than likely try to run away but like any animal, it will bite you if it feels threatened. When handled, they will excrete a foul-smelling liquid from their body in an attempt to dissuade you, or any animal, from holding onto it much longer.

Their bite was thought to be non-venomous for a long time until around 2005 when it was discovered that they do in fact produce venom. The venom they produce is a neurotoxic venom but it is rarely ever dangerous to humans because of the low amount produced or administered in a bite.

There will always be a small chance that someone who is allergic to the venom a Garter Snake produces has a worse reaction than the majority of people, but for the most part, if you are bitten you should expect some bruising or itching at worst. 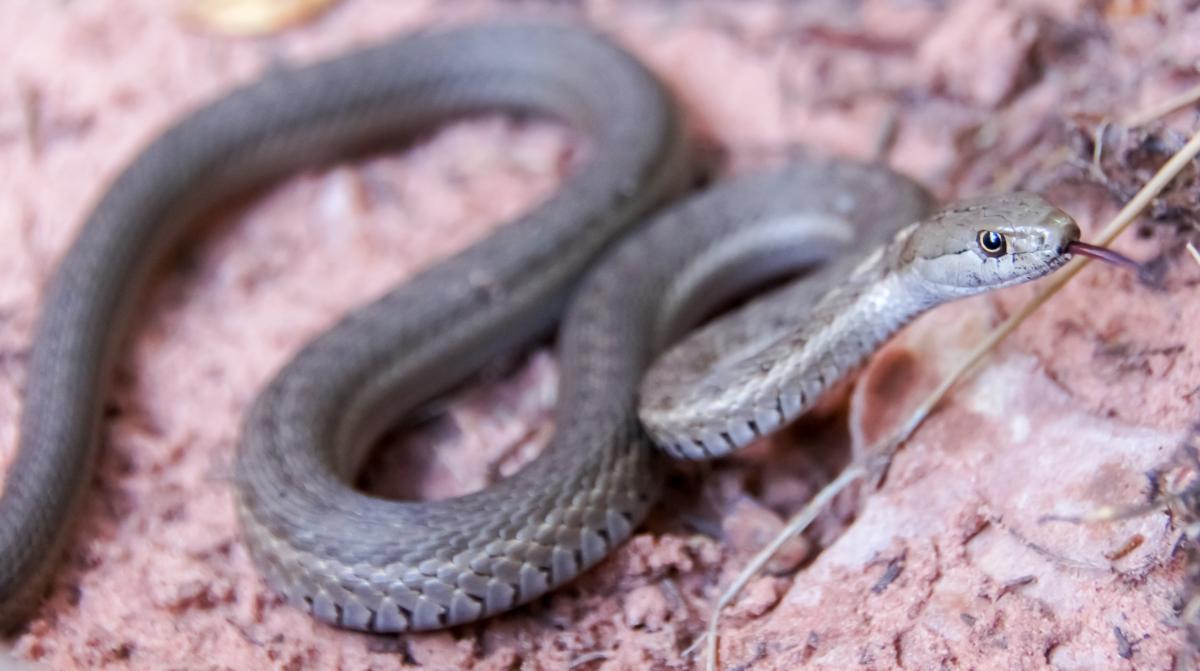 They are slender and sometimes long snakes depending on which species or subspecies you encounter. With 35 species of Garter Snakes existing in North America, it’s hard to describe the coloration you may see because it will change drastically depending on the environment.

For example, the Ribbon Snake has solid coloration with lines of yellow running down its body whereas the Western Terrestrial Garter Snake can be a rich red color with black spots from its head to its tail.

In order to be broad and cover a vast majority of Garter Snakes, you can expect them to have large round eyes, be long but thin in body size, and have striping down the length of their body that may or may not be accompanied by spots.

To get the exact coloration or sizes for a specific Garter Snake, click here to view the species list.

As stated before, there are 35 species of Garter Snakes all of which can grow to different sizes so in general, you can expect a garter snake to grow to 18 inches long all the way up to 51 inches long depending on the snake.

Due to their proximity to bodies of water and grasslands, they will eat slugs, lizards, amphibians, small rodents, or anything it can kill. Garter Snakes have also been known to eat small fish if they’re lucky enough to catch one.

In their populations, there are typically more males than there are females which results in mating balls where a few females with be swarmed by a bunch of male snakes. Breeding season starts in the fall before hibernation and the female will store the sperm until spring. Breeding can sometimes resume in the spring and if it does, the stored sperm from the fall will be replaced by the newer sperm to fertilize the eggs.

The female will give birth to around 12 to 40 baby snakes, depending on the species, anywhere from July to October.

With 35 species in North America, you can find them in pretty much every state in the United States as well as Mexico and parts of Canada. To view a full list of specific Garter Snake species and where they live click here.

There are a few subspecies found in Nevada such as the Western Terrestrial Garter Snake and Wandering Garter Snake.

The San Francisco Garter Snake has been endangered since 1969 but due to how common they are, the Garter Snake as a whole is not protected by federal laws.

What is a Garter Snake