The Great White Egret is a large egret that is found on every continent except for Australia and Antarctica. Even though this bird is called and considered to be an egret, they are not a part of the Egretta genus like the Snowy Egret. Instead, they belong to the Ardea genus which typically includes larger birds than birds found within the Egretta genus.

Hunting the Great White Egret and other birds to an extremely dangerous level created the National Audubon Society which is still active to this day and is one of the oldest environmental organizations in North America. This society was founded to protect birds from being killed for their feathers and because egrets were hunted in such large numbers, they decided to make the Great White Egret their symbol or mascot. 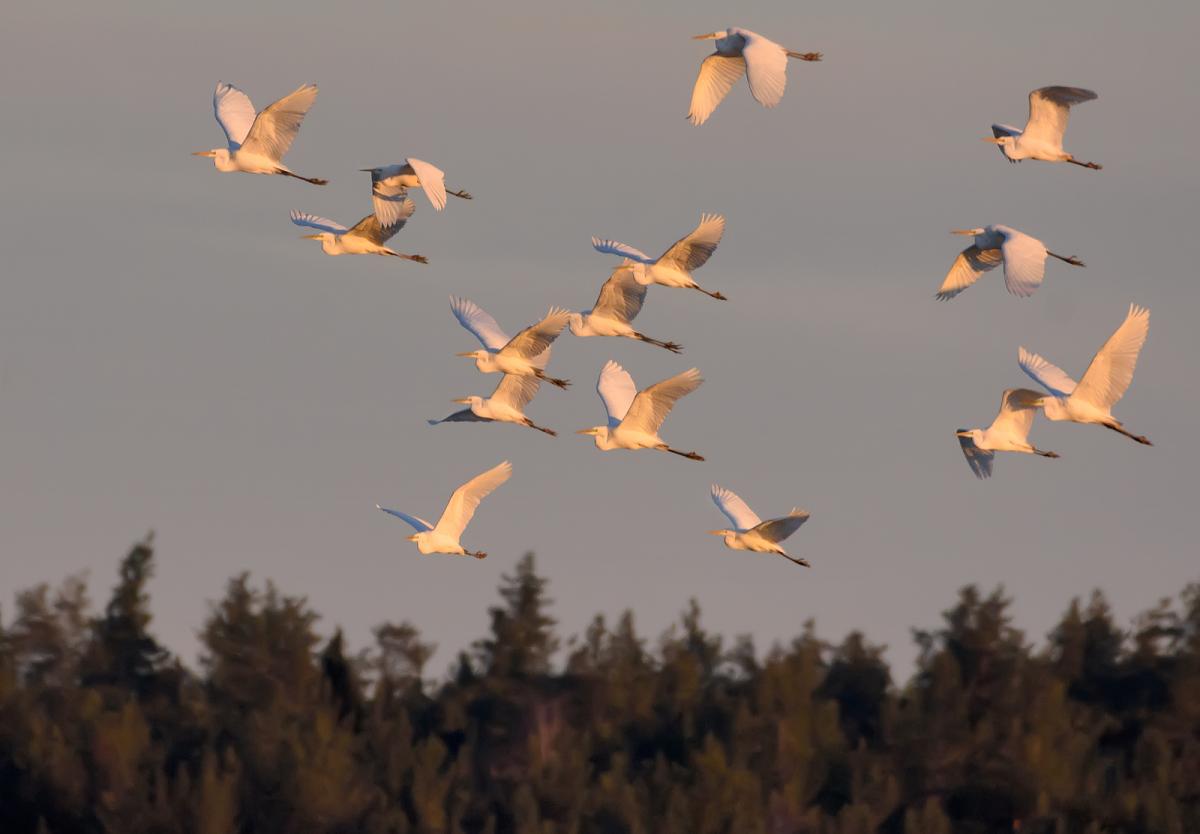 The Great White Egret is a large bird with all-white feathers standing nearly three feet tall. These birds have long necks with long, sharp bills that they use to hunt with. Their bills are usually yellow in color but can become darker during the breeding season. A Great White Egrets face will also change color during mating season with its lore turning from yellowish to bright green. The lore is the region on a bird, reptile, or amphibian that is in between their nostril and eye.

Great White Egrets have long black legs with black feet which other than their massive size, can help you distinguish between them and Snowy Egrets, which have yellow feet. These birds also have bills that are yellow in color like the Snowy Egret.

From head to tail, the Great White Egret can grow between 30 to 40 inches in length from head to tail. Their wingspans are even longer growing around 52 to 67 inches from wingtip to wingtip. That’s nearly 6 feet worth of wings they get to work with.

Great White Egret’s mating season varies depending on where they live. In the tropics, they tend to breed year-round as in their northern range, they breed in the spring. If the egrets live in their southern ranges, breeding season is anywhere from October to March. Egrets found in Florida will start breeding in December all the way through January.

Female Great White Egrets will lay anywhere from 1 to 6 eggs at a time with eggs taking around 25 days to hatch. Once the baby birds have hatched, both parents help raise and feed the young until they leave the nest, which happens in around 3 weeks’ time.

Great White Egrets live in north, central, and south America with most of the population living in south America year-round. Because they can be seen in a wide variety of states at different times of the year, we’re going to post an image from allaboutbirds.org that cleanly shows where you can expect to find these egrets.

The Great White Egret, while still on the upward path to recovery, is still a protected bird under the Migratory Bird Treaty Act.