Desert Animals » What is a Kangaroo Rat (Dipodomys deserti) 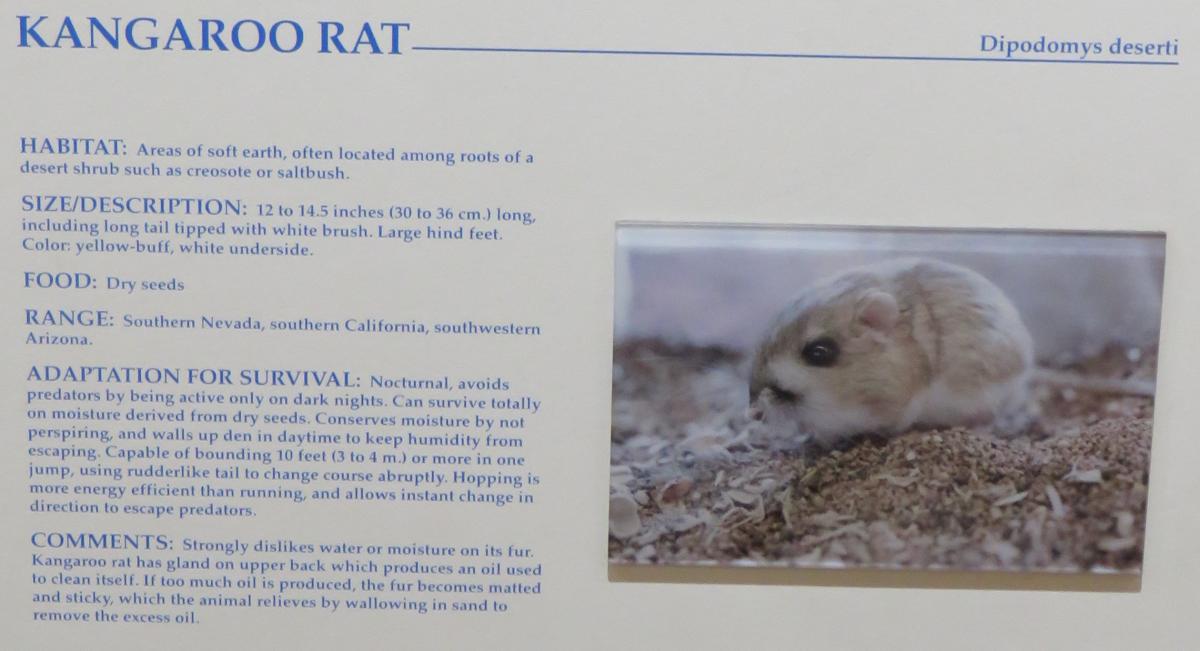 What is a Kangaroo Rat

The Kangaroo Rat is a very small rodent that lives in the deserts and arid climates of western North America. Kangaroo Rats have two small front legs and two legs in the back that are substantially larger allowing them to traverse terrain by hopping around much like a kangaroo hence the name, Kangaroo Rat.

Because of their giant hind legs, the Kangaroo Rat has developed the ability to launch itself 6 to 9 feet a jump at a speed of almost 6 miles per hour. To put that into perspective, the Kangaroo Rat usually grows to be about 4 to 8 inches long which means it’s able to jump over 15 times it’s own body length.

Even though they hop like a kangaroo, the Kangaroo Rat developed this skill on it’s own and has no known lineage tied to the marsupials of Australia.

Perfectly evolved for living in the desert, Kangaroo Rats don’t require a fresh water source to live. They accomplish this by surviving off of the water contained in the seeds and occasional vegetation the eat.

Kangaroo Rats are able to extract up to a half gram of water for every gram of seed they eat which doesn’t seem like a lot but when you weigh as much they do, it starts to add up.

There are around 22 known species of Kangaroo Rats in North America.

As stated before, the Kangaroo Rat is tiny only growing to be about 1 to 6 ounces or 35 to 180 grams in weight. They are often brown in color with white faces, a light or white belly, and a white racing stripe down it’s side.

Their tails usually account for more than half of their total body length and are hairy with white or brown patches that helps them balance when hoping around.

Kangaroo Rats will grow anywhere from 4 to 8 inches sometimes reaching up to 12 inches in total length, depending on the species, with their tails making up over half of that as previously stated.

Kangaroo Rats feed primarily on seed and will eat surrounding vegetation or even bugs depending on the time of year. While foraging at night, the Kangaroo Rat will store excess seeds in it’s cheeks to take home and store in their burrows to eat for later. As an added bonus, seeds stored in the burrows tend to absorb more water.

Kangaroo Rats breed throughout most of the year, typically in the summer during the seasonal rains, producing up three litters.

Gestation for the Kangaroo Rat lasts about 22-27 days long and the female Kangaroo will give live birth in her burrow.

Kangaroo Rats are found throughout Southern Nevada, southern California, southwestern Arizona, northern Mexico and some can be found all the up in Canada depending on the species.

How Long do Kangaroo Rats Live

Kangaroo Rats live around 2 to 5 years.

As of writing this, the Kangaroo Rat is not an endangered species and is not formally protected.

What is a Kangaroo Rat