Class: Reptilia » What is a Mojave Fringe-toed Lizard (Uma scoparia) 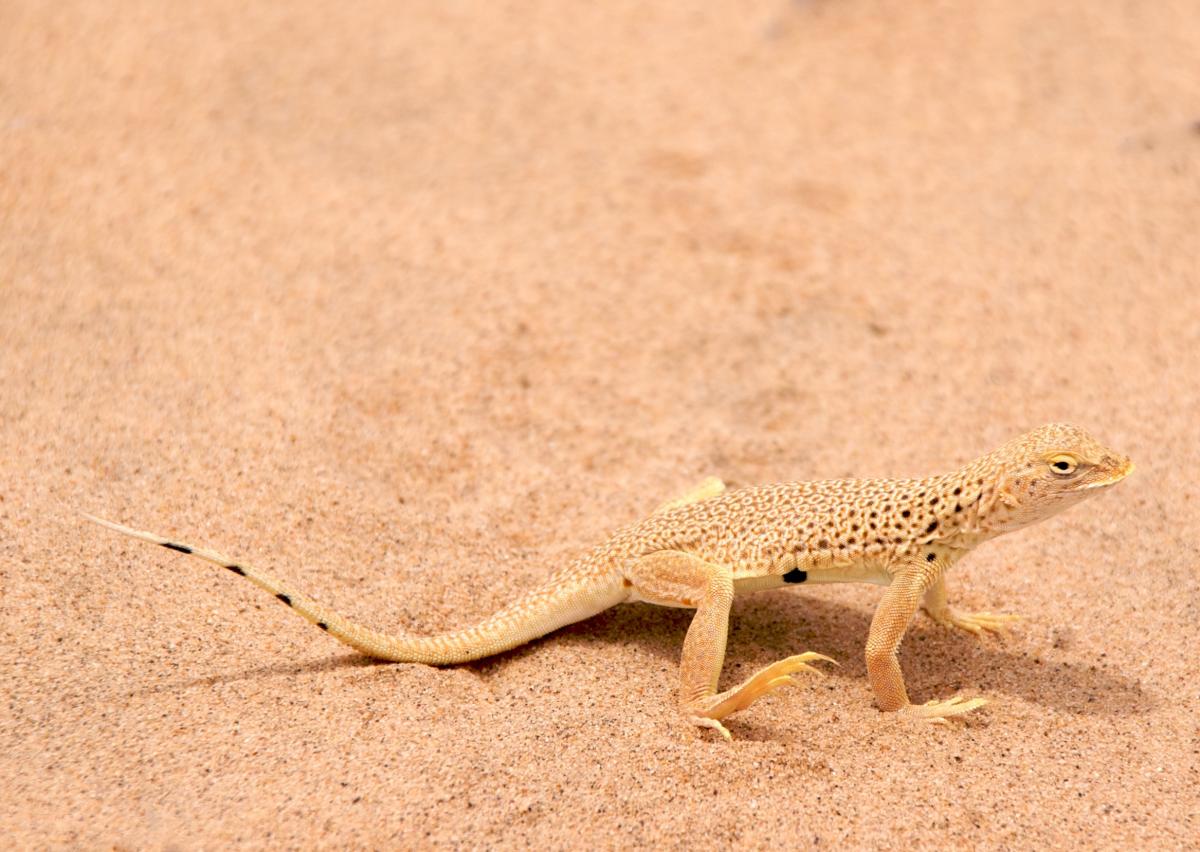 The Mojave Fringe-toed Lizard is a medium-sized lizard that lives in the American southwest where it can be seen sprinting across the sand at speeds of up to 23 mph. When it’s not running across windswept dunes, this lizard can be found burrowed in the sand to avoid the heat of the day as well as any airborne predators. While being out of sight and out of mind may seem like a good thing, when the Mojave Fringe-toed Lizard is buried in the sand it is at its most vulnerable to other dangers, mostly ATVs and dirt bikes. These lizards are very common out in the dunes of Dumont where off-roading is extremely popular and often a problem for lizards trying to stay cool or safe under the surface of the sand.

Mojave Fringe-toed Lizards have a flat body with smooth skin rather than rough or scaly like other reptiles that live in the desert most notably, rattlesnakes.

These lizards match the color of their environment which means they are tan or greyish white, for the most part, with small black spots on their back. Their tail has black splotches or even bands that are usually found on the underside of the tail.

Speaking of the underside of the lizard, Mojave Fringe-toed Lizards have two dark spots on either side of their belly with the rest of the stomach being white or pale in color. Their throats have up to three U or crescent-shaped lines that are also dark or black in color.

As stated before, these lizards can sprint as fast as professional athletes, and this is due to the way their feet are shaped. The Mojave Fringe-toed Lizard has rear feet that are wide and act like a snowshoe by spreading out the weight of the lizard over a larger surface area. Because of this, the lizard won’t sink in the sand when it’s running allowing it to outmaneuver any would-be predators who may dig into the sand when chasing.

Mojave Fringe-toed Lizards can grow anywhere from 2 to 4 inches in body length. The reason why I specify body length is because their tail is around the same length as their body which means these lizards can reach up to 7 or 8 inches in total length.

Mojave Fringe-toed Lizards eat a typical small desert reptile diet of bugs like ants and beetles as well as the occasional leaf, flower, or seed depending on the circumstances.

Mating season for the Mojave Fringe-toed Lizard starts in late spring with eggs hatching in September. Female lizards will lay around 1 to 5 eggs at a time with an average of 2 or 3. If the winter before the mating season has a lot of rain or snow, more young will be produced due to the increase in the food they eat like plants and bugs.

Mojave Fringe-toed Lizards can be found in southern California, southern Nevada, and western Arizona but only on the very left side of the state near the border.

While the Mojave Fringe-toed Lizard has had petitions in the past to protect the species, it does not have any formal laws or protections for it at the time of writing this. Even if there aren’t laws protecting these lizards, they are still in danger from human activity such as off-roading which can crush or damage the lizard’s home.