Class: Aves » What is a Phainopepla

What is a Phainopepla

We saw several of these when we camp at the Valley of Fire Group Campground. They would hang in the trees and then fly into the rocks, where we assume they have built their nests.

The phainopepla or northern phainopepla (Phainopepla nitens) is the most northerly representative of the mainly tropical Central American family Ptiliogonatidae, the silky flycatchers. Its name is from the Greek phain pepla meaning “shining robe” in reference to the male’s plumage. Phainopeplas have been found to imitate the calls of twelve other species, such as the red-tailed hawk (Buteo jamaicensis) and the northern flicker (Colaptes auratus).

The phainopepla is a striking bird, 16–20 cm (6.3–7.9 in) long with a noticeable crest and a long tail; it is slender and has an upright posture when it perches. Its bill is short and slender. The male is glossy black, and has a white wing patch that is visible when it flies; the female is plain gray and has a lighter gray wing patch. Both sexes have red eyes, but these are more noticeable in females than males.

The phainopepla ranges as far north as central California with the San Joaquin Valley and southern Utah, and south to central Mexico, the interior Mexican Plateau region; the southern edge of the plateau, the transverse mountains is its non-breeding home. It is found in hot areas, including desert oases, and is readily seen in the deserts of Arizona, southern Nevada, and southern California; also the Baja Peninsula, both Baja California-(north), and Baja California Sur where are the only breeding resident birds. Extreme individuals have traveled as far as Canada, with one bird in 2009 reaching as far north as Brampton, Ontario, Canada.

Their diet consists of berries, any small insects, fruits, and vegetables. Phainopepla has a specialized mechanism in their gizzard that shucks berry skins off the fruit and packs the skins separately from the rest of the fruit into the intestines for more efficient digestion.  So far this is the only known bird able to do this. They appear to relish the fruit of Phoradendron californicum, the desert mistletoe.

It nests in the spring. The eggs are gray or pink and speckled, and the incubation, done by both the male and female, takes fifteen days. The young will be reared by the parents for up to nineteen more days. 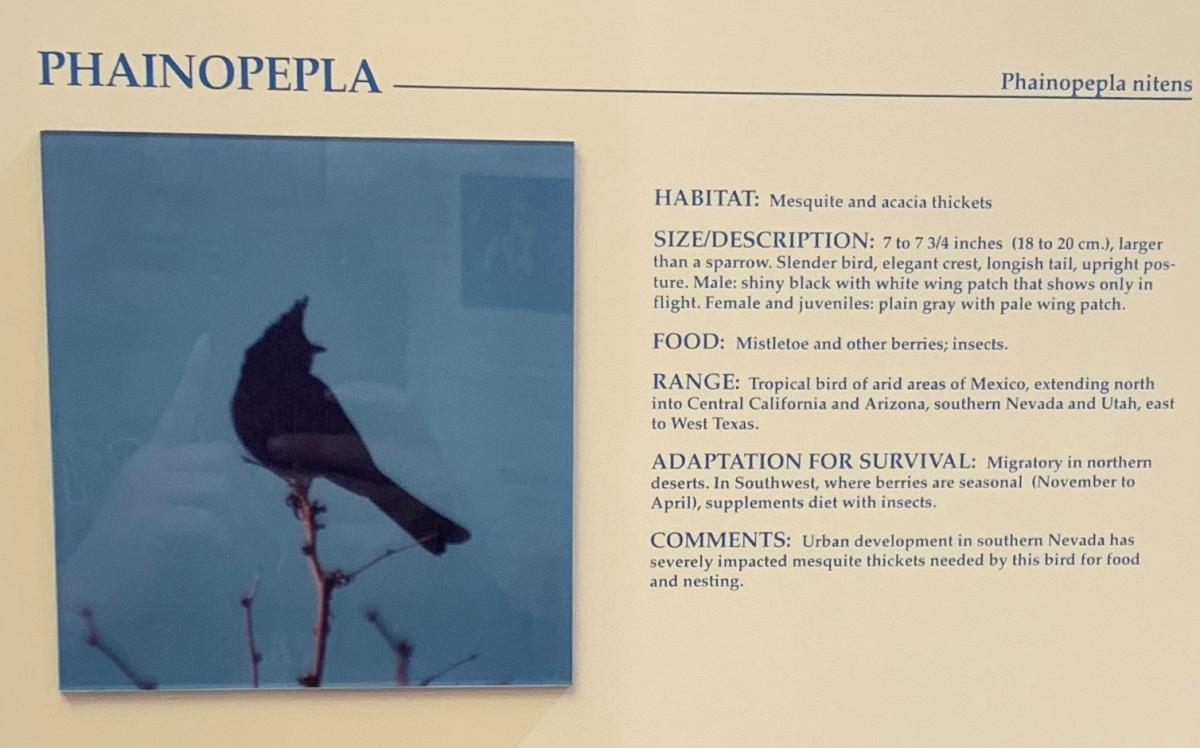 Below is a transcription of the above sign found at the Valley of Fire Visitor Center. Phainopepla – Phainopepla nitens Habitat: Mesquite and acacia thickets Size/Description: 7 to 7 3/4 inches (18 to 20 cm) larger than a sparrow. Slender bird, elegant crest, longish tail, upright posture. Male: shiny black with white wing patch that shows only in slight. Femail and juveniles: plain gray with pale wing patch. Food: Mistletoe and other berries; insects. Range: Tropical bird of arid areas of Mexico, extending north into Central California and Arizona, southern Nevada and Utan, east and West Texas. Adaptation for Survival: Migratory in northern deserts. In Southwest, where berries are seasonal (November to April), supplements diet with insects. Comments: Urban development in southern Nevada has severely impacted mesquite thickets needed by this bird for good and nesting.

What is a Phainopepla