What is a Sonoran Desert Sidewinder

The Sonoran Desert Sidewinder is a species of rattlesnake that lives in the southwest United States as well as parts of Mexico. These sidewinders have evolved over time to be able to withstand the immense heat and open land of the desert using their unique way of moving to track down prey. While they can cover great distances across the sand, sidewinders actually find areas where rodents and lizards are common and bury themselves in the sand and wait. A lot of times, its prey sources can bolt faster than it can side wind so these snakes have turned to the art of ambushing.

As you could’ve guessed, Sonoran Desert Sidewinders move by using a side winding motion that sends the snake forward but at a diagonal or sideways angle. They do this because if they were to slither straight like most snakes, they would dig themselves a rut unable to slither up inclines of loose sand effectively, and could even end up accidentally buried.

Being a rattlesnake, the Sonoran Desert Sidewinder is venomous but has not been known to be lethal to humans. The venom they make is a hemotoxin that can cause blood and muscles to breakdown around the bite wound which can lead to further complications if not treated.

The Sonoran Desert Sidewinder venom isn’t nearly as potent as other rattlesnakes so as stated before, bites from these snakes very rarely cause major issues or death in humans. On top of that, given that these snakes live in the desert, encountering one in the wild is even more rare than running into another species of rattlesnake.

As it goes with anything venomous, especially rattlesnakes, treat every bite like you were bitten by the most dangerous rattlesnake in the desert and seek medical attention immediately. The chances of complications are a non zero number which is too high to try and play the odds with. 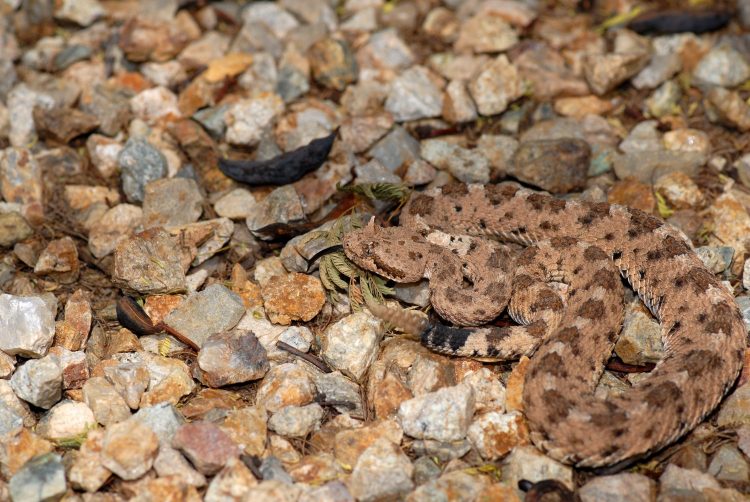 A Sonoran sidewinder from the Tucson area of Arizona.

This subspecies of the Desert Sidewinder (Crotalus cerastes) was established by J.M. Savage and F.S. Cliff, based on information that had previously been published by Stanford, Klauber and Hensley.

They described their new form, C. c. cercobombus, as occupying the eastern half of the range for C. c. laterorepens as defined by Klauber.

Sonoran Desert Sidewinders are a lightly colored snake with patches and blotches spaced out down the length of its body. You can expect their bodies to be tan, gray, cream, or even a pinkish color with dark tan, gray, or cream color blotches.

The face of a Sonoran Desert Sidewinder will have two dark stripes that start at each eye and makes its way to the back of the snakes head. On their eyes, you will find two pointed scales that give the snake the appearance of having horns hence its nickname, the Horned Rattlesnake. The scales of this snake are usually more rough than normal rattlesnakes as it needs them to grab onto the sand as its side winding and to help it burrow.

Its body follows the typical rattlesnake trend of being thin at either end and thicker towards the middle. It also has a diamond shaped head, much like other pit vipers.

Sonoran Desert Sidewinders will grow anywhere from 18 to 32 inches in length with baby sidewinders being 6 o 8 inches long at birth.

Living in the desert, the Sonoran Desert Sidewinder has a diet consisting of small mammals, like rodents and mice, as well as lizards and the occasional bird if it’s small enough.

The Sonoran Desert Sidewinder mating season begins in spring with females giving live birth in late summer to early fall. Female snakes will have anywhere from 5 to 18 young at once.

Sonoran Desert Sidewinders can be found in the deserts of Arizona as well as parts of northern Mexico, mainly in Sonora.

As of writing this, the Sonoran Desert Sidewinder population appears to be stable.

What is a Sonoran Desert Sidewinder