What is a Tarantula Hawk

The Tarantula Hawk is a type of parasitoid wasp that preys on different spiders (e.g., Tarantulas), mainly the tarantula, in order to carry its egg and eventually become a food source for its hatched young later on.

The good news is that the Tarantula hawk is not an aggressive insect and would rather spend its days jumping from plant to plant-eating nectar. While they aren’t aggressive, they will sting anything that provokes it so be careful when around Tarantula Hawks and you should get by just fine. Tarantula Hawks also prefer to hide in their dens during the heat of the day and will only come out once it’s cooled off.

While you may be paralyzed by the pain that comes from the sting, you will still be able to move around, scream, and do anything else you could before you got stung. Once you get stung, and you’ll know if you got stung, the best advice we can give you is to simply find an open space without debris, lay down, scream if you have to, and ride out the pain.

This sentiment is also echoed by the one and only Justin O. Schmidt due to the fact that it is a harmless sting that will subside after a few minutes of excruciating pain. If stung, the initial reaction will probably be to run around or flail but try your best to stay low and as contained as possible.

The reason I say this is because the sting won’t cause any bodily harm, but running around in pain can if you aren’t paying attention and run into something, roll your ankle, or do something else while trying to avoid the pain.

The venom from the Tarantula Hawk is nonlethal to humans unless you are allergic to it in which case symptoms and side effects can vary. Once the pain has subsided, all the post-care you need to do is make sure the sting is cleared of any debris or dirt and wash it with warm water and some antibacterial soap to reduce infection risk. The redness and minor swelling may last a few days to a week and should go down on their own. 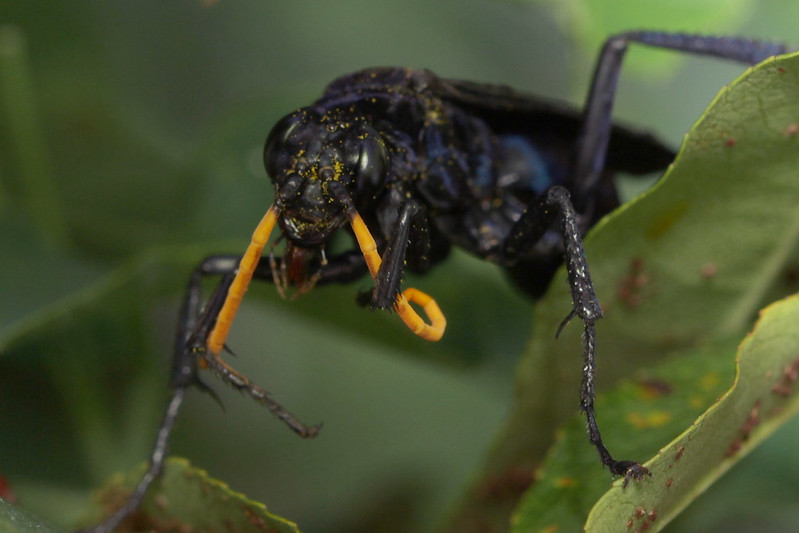 The Tarantula Hawk is in fact not a hawk but an insect that usually has orange or dark amber wings and a black or dark blue body.  The legs of a Tarantula Hawk are long and will hang during flight like other wasps.

Being on the large side of insect size, the Tarantula Hawk can reach a length up to 2 inches with a stinger than can be up to 9/32 inches. Due to their large size and large stinger, the Tarantula Hawk isn’t eaten by many birds with the Roadrunner being the only real constant threat to them. 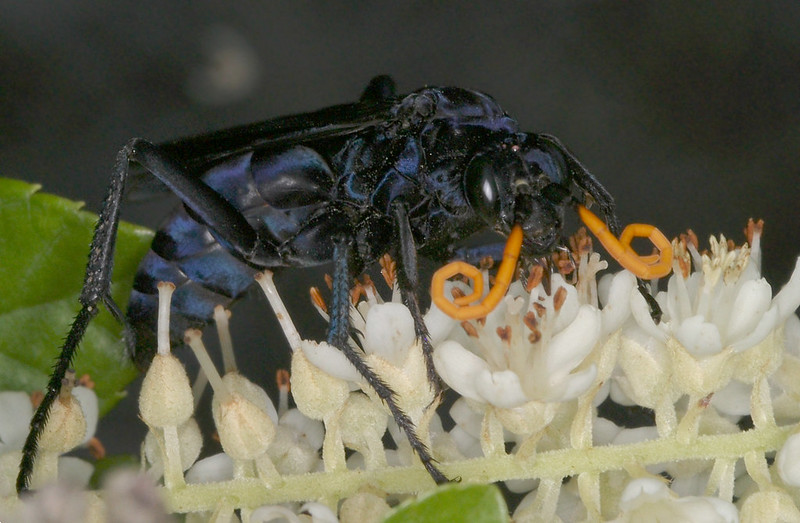 Tarantula Hawks are what’s called a nectarivorous species which means they feed on the nectar of plants in the nearby area. The plants they prefer western soapberry trees, mesquite trees, and milkweeds and are major pollinators of the milkweed plant.

Because the Tarantula Hawk is a parasitoid wasp, it requires a host to carry its egg and hatch its baby which is where it derives the name, Tarantula Hawk. After finding a suitable male to make eggs with, The female Tarantula Hawk will find a large spider, in most cases a tarantula, and sting it until the spider is paralyzed to the point where it can be dragged back to the wasp’s den.

From there, the female will lay its egg in the spider where it will incubate and hatch at a later time. Upon hatching, the larva will feed on the insides of the spider avoiding the organs keeping the sider alive until it is ready to emerge from the spider’s abdomen and continue the cycle. 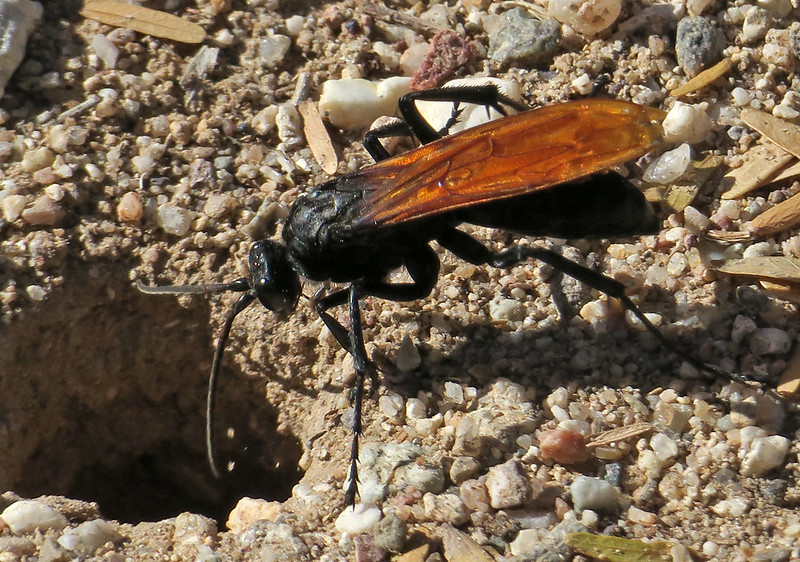 The Tarantula Hawk can be found on every continent except Antarctica. If the place you live has tarantulas, chances are there are Tarantula Hawks nearby. In the United States, Tarantula Hawks live primarily in the southwest states including Texas, Arizona, New Mexico, Nevada, California, and even parts of Utah.

How Long do Tarantula Hawks Live

Tarantula Hawks have a short lifespan of up to a few months and reproduce as fast as they can.

As of writing this, the Tarantula Hawk is not a protected species. 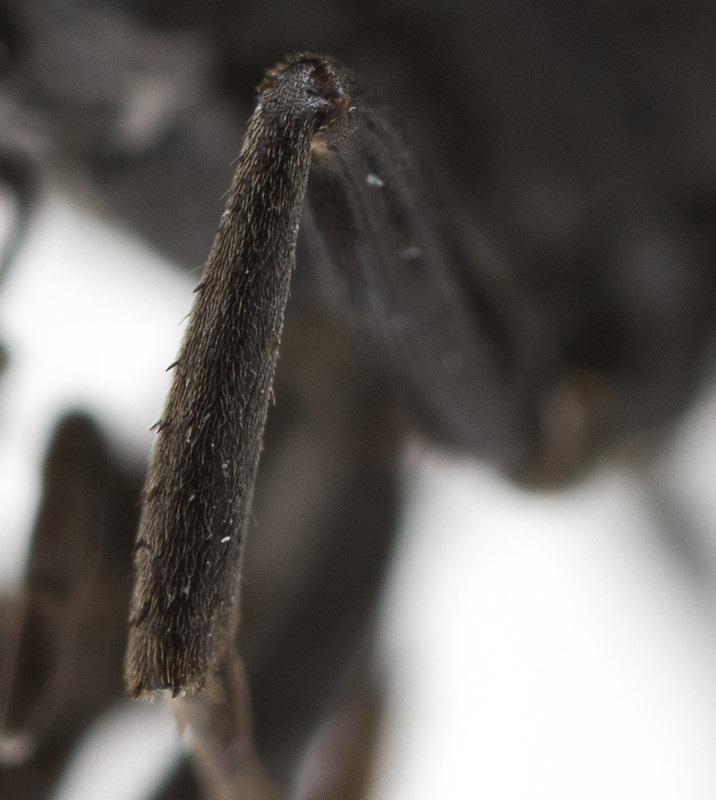 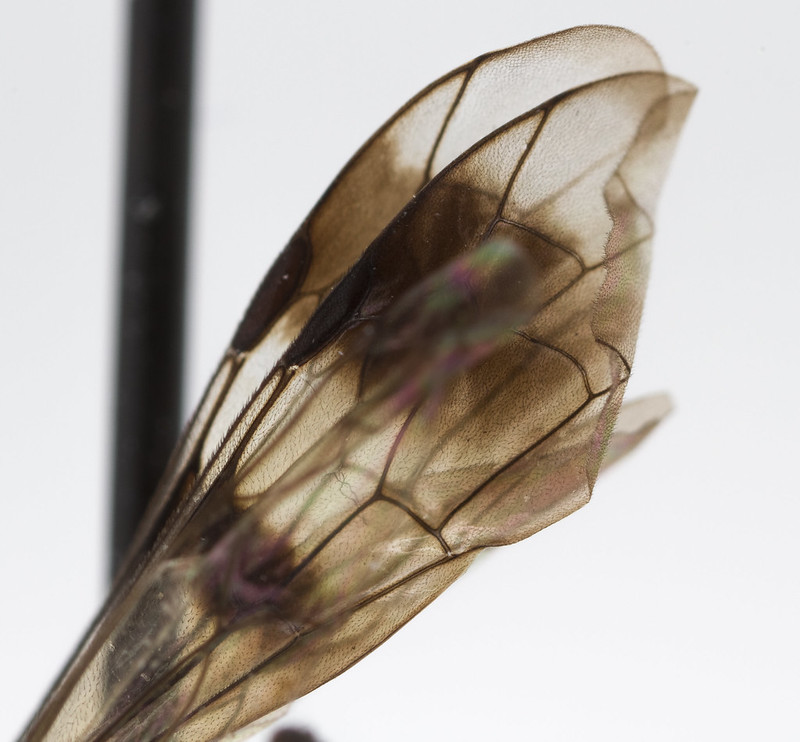 What is a Tarantula Hawk