Class: Arachnida » What is a Tarantula (Aphonopelma) 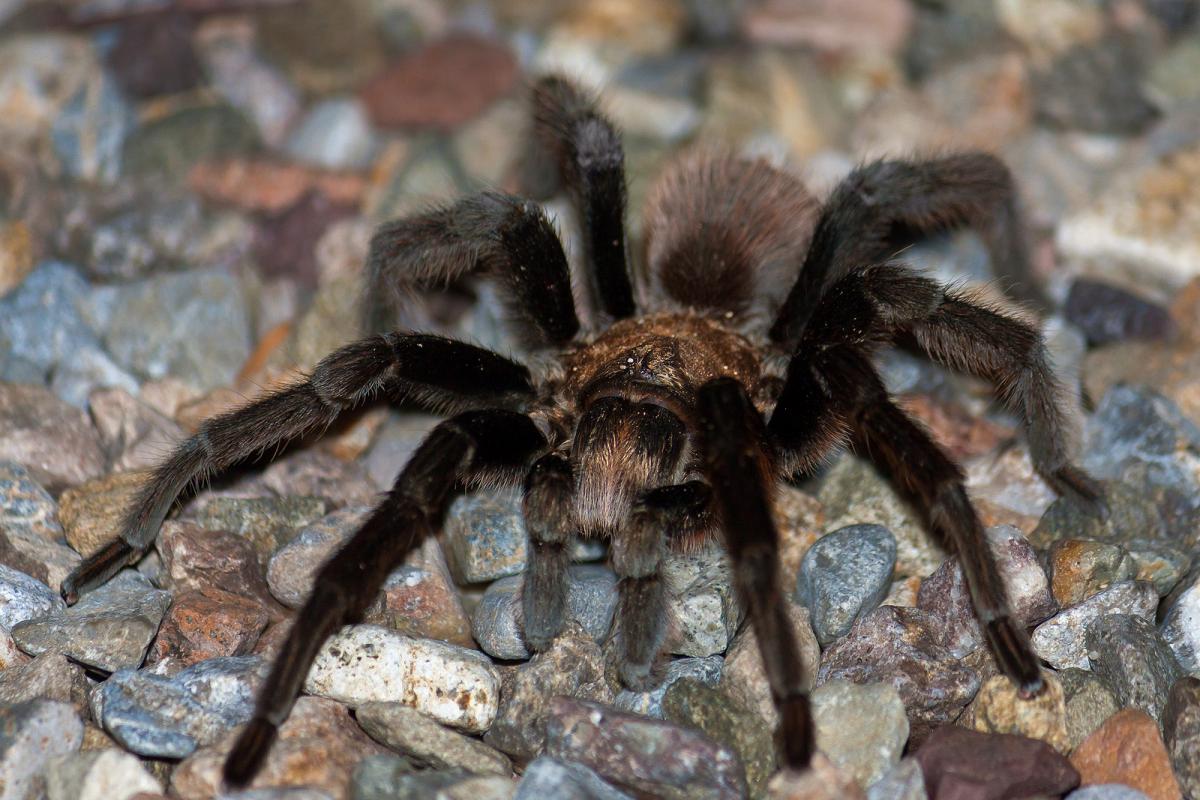 A male desert tarantula crosses a gravel surface in the Sonoran desert. You can see his mating hooks and he has sand specks on his body.

What is a Tarantula

Easily one of the most, if not the most, iconic spiders in the animal kingdom, the Tarantula is a thing of nightmares to some while being a thing of beauty to others.

The Tarantula is a very large, hairy, and bulky spider that lives on every continent except for Antarctica and prefers to live in a climate that is warm with plenty of covers to hide under like rainforests and deserts.

A fun fact about the Tarantula is that the hairs on its body are incredibly itchy when introduced to the eyes, nose, or mouth. As a defense mechanism, the Tarantula will kick the hairs off its back to distract would-be predators long enough for it to run away and hide. Because Tarantula hair is so irritating, it was used a lot of times in itching powders.

The Tarantula has a wide variety of species, over 1,000 as a matter of fact, that come in all shapes and sizes so for this post we will be focusing on the Tarantulas found in the United States, mainly the Aphonopelma genus. Even the Aphonopelma genus has over 60 species within it so this will be a broad information post without getting into the nitty-gritty of every single type of Tarantula.

Just know that as a whole, the Tarantula can not kill you with a single bite and is wildly considered to be not dangerous to humans. If there was a species or subspecies that was extremely dangerous to humans, we would include it. 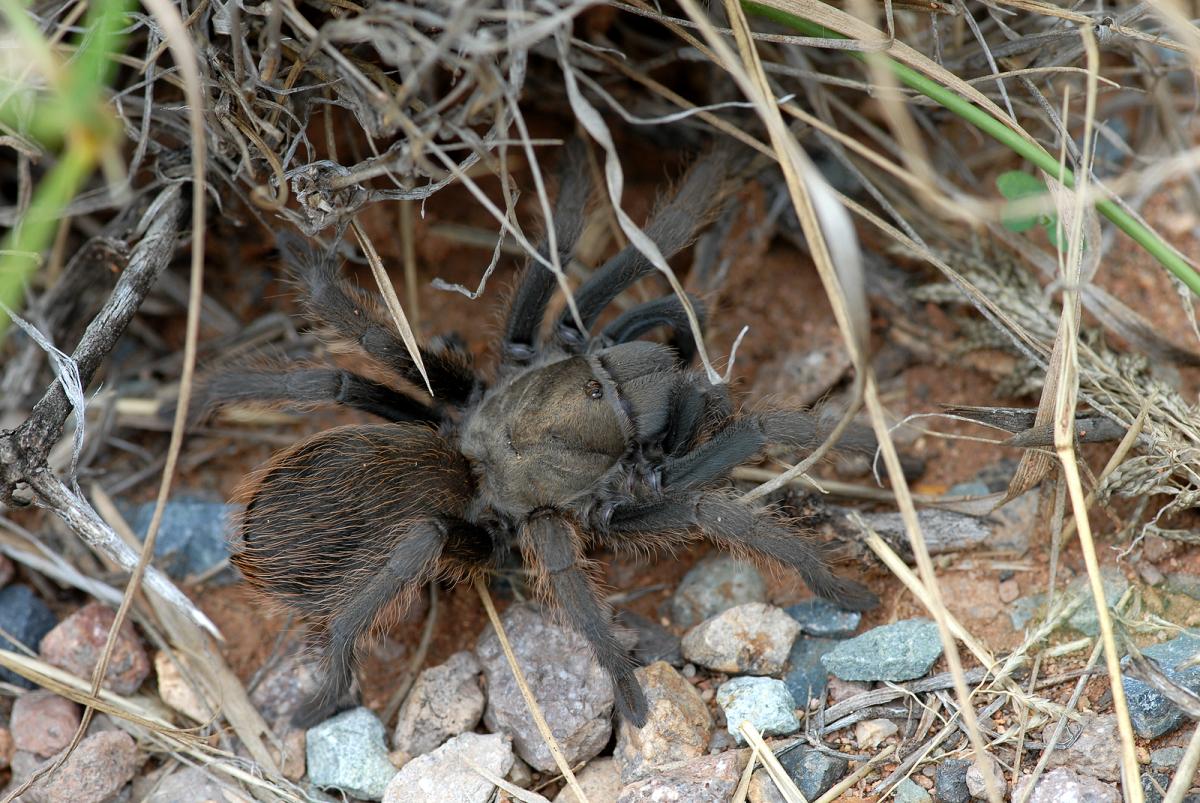 A tarantula as seen crawling around on the ground under grass and twigs from Arizona.

There are 59 species within the Aphonopelma Genus

The species Aphonopelma iodius is found in Southern Nevada and around Las Vegas.

Did you know that Gabbs, Nevada is home to the largest tarantula migration? 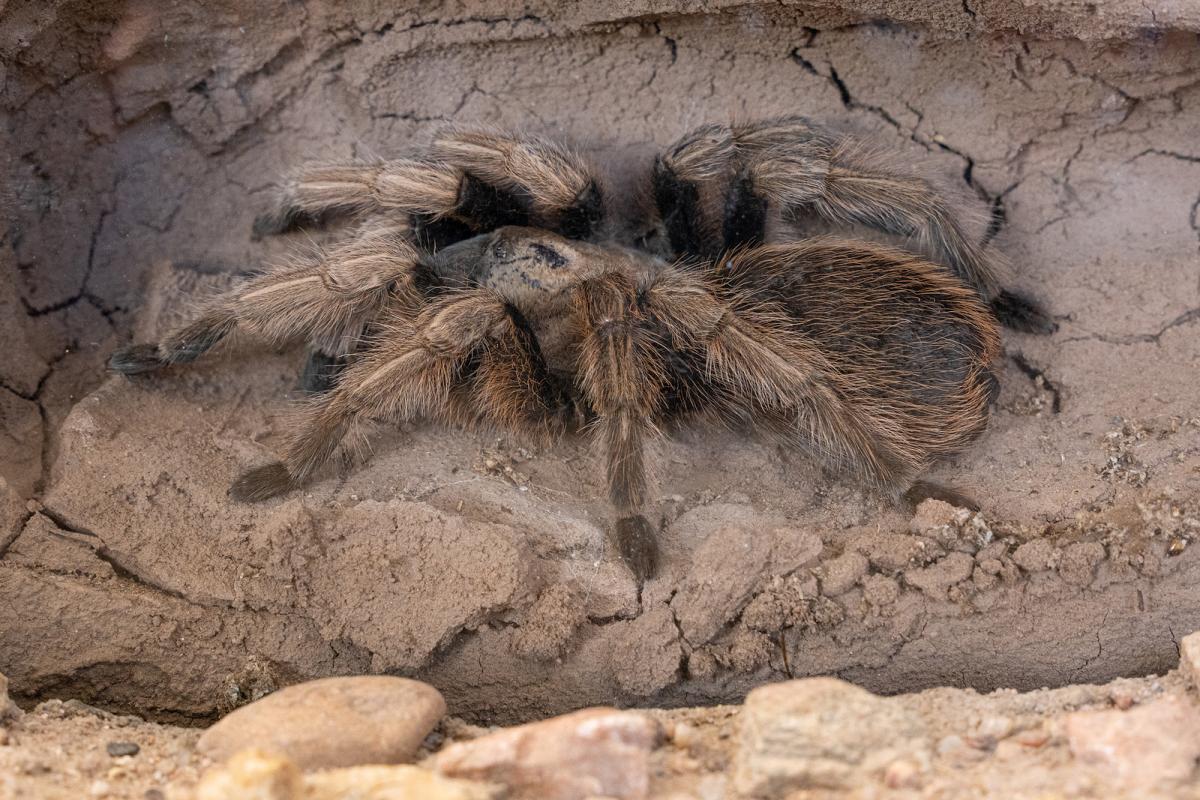 Huge, Hairy, Bulky. Tarantulas in the United States will typically be brown, tan, or even black and are covered in fine hairs that can cause irritation if they manage to get on your face.

As stated before, the Tarantula is a bulky or even stocky spider with 4 legs on either side, two pedipalps on its head in front of its eyes, and a set of chelicerae which are essentially the spider’s jaws or teeth. The pedipalps are simply feelers for the spider so it can sense what’s in front of it better so think of them as their hands or fingers. 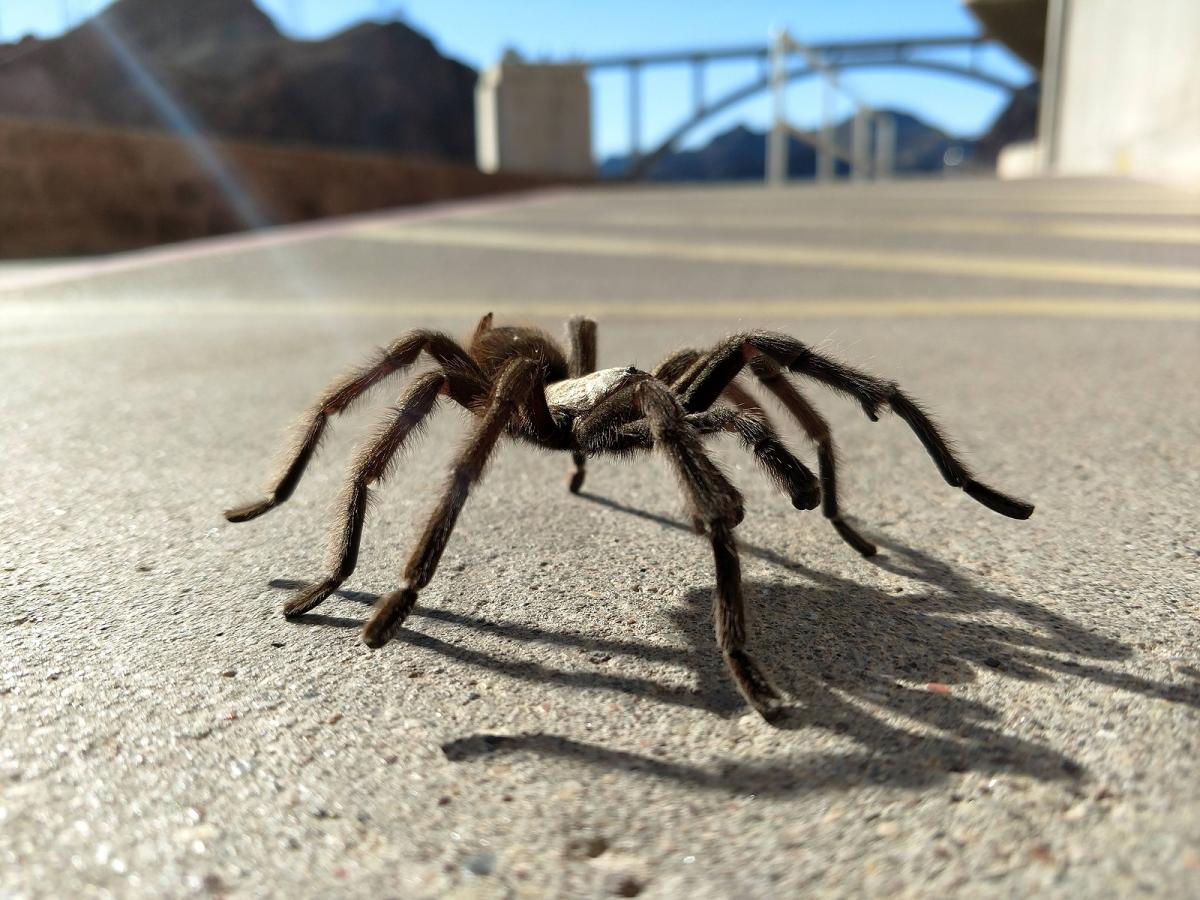 Tarantula in natural habitat, Theraphosidae at Hoover Dam in Nevada

Tarantulas will typically range in length from 2 to 3 inches and their leg spans can reach up to about 5 or 6 inches. As we said, huge.

As stated before, the Tarantula bite is nonlethal to humans unless you have a rare allergy to their bite in which case you should talk to your doctor about possible treatment if bitten.

For 99 percent of people bitten by a Tarantula, all that needs to be done to treat the wound is to wash the area with soap and water and ice the wound to reduce swelling and numb the bite site. The bite should clear up on its own so monitor it over time for any changes or improvements. 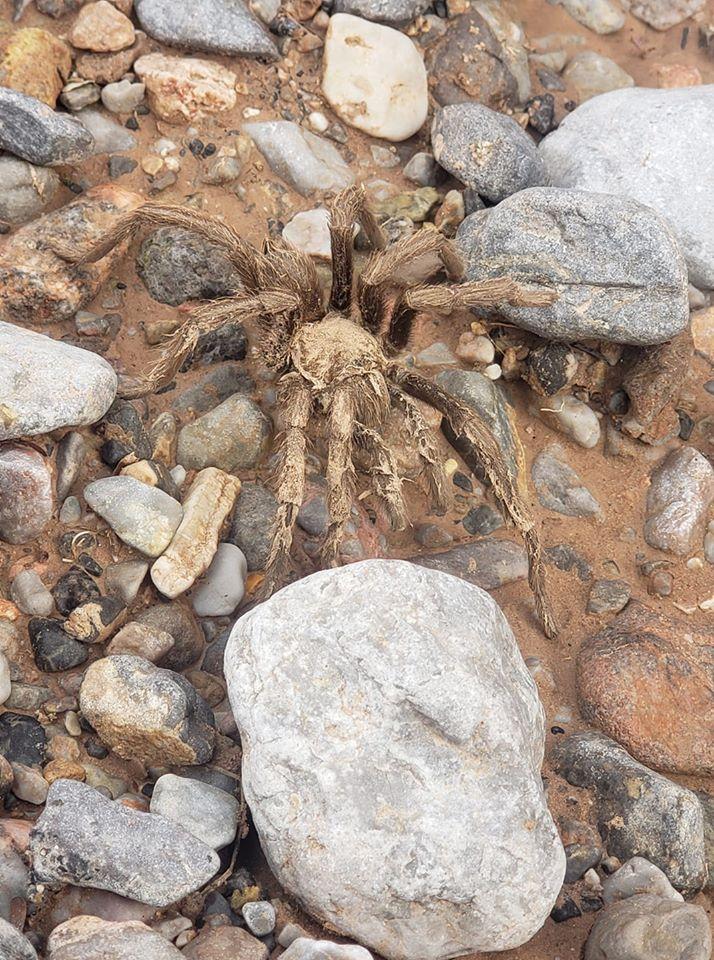 Above is a tarantula spotted at Anniversary Narrows on our way to Anniversary Peak. He’s a bit muddy after all the rain from a few days prior.

Like most spiders, the Tarantula feeds on insects, and other spiders, and due to its size, it is able to even eat small snakes, frogs, and lizards.

Tarantulas prefer to hunt at night so you don’t usually need to worry about interrupting one on its hunt.

The Tarantula mating season starts in the late summer and carries into the early fall when the male and female Tarantula will dance to decide if they are compatible. Upon finding a suitable mate, the male will impregnate the female and run away before the female comes to her senses and tries to attack or eat him.

Once the eggs are formed, the female will lay anywhere from 50 to 2,000 eggs in a silk egg sac and protect the eggs until they hatch six to eight weeks later 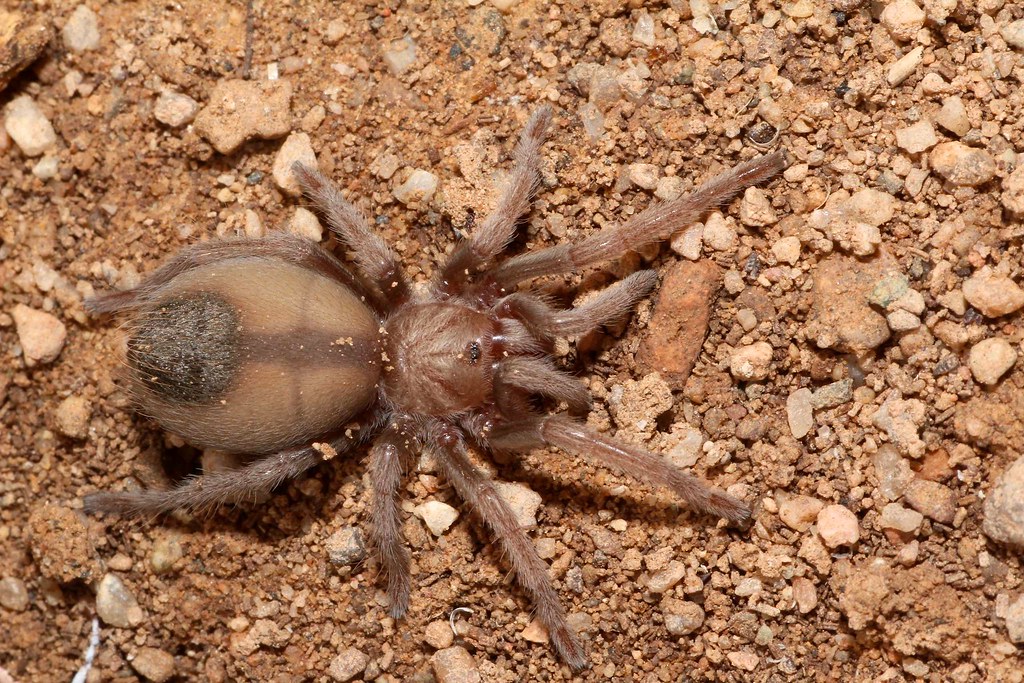 The Tarantula is a global spider living anywhere that’s warm but in the United States, you can expect to find them throughout the south and southwest living in up to 12 different states. Those states include:

Depending on the species, the Tarantula is considered an endangered species due to habitat destruction or over-collection for the animal trade. 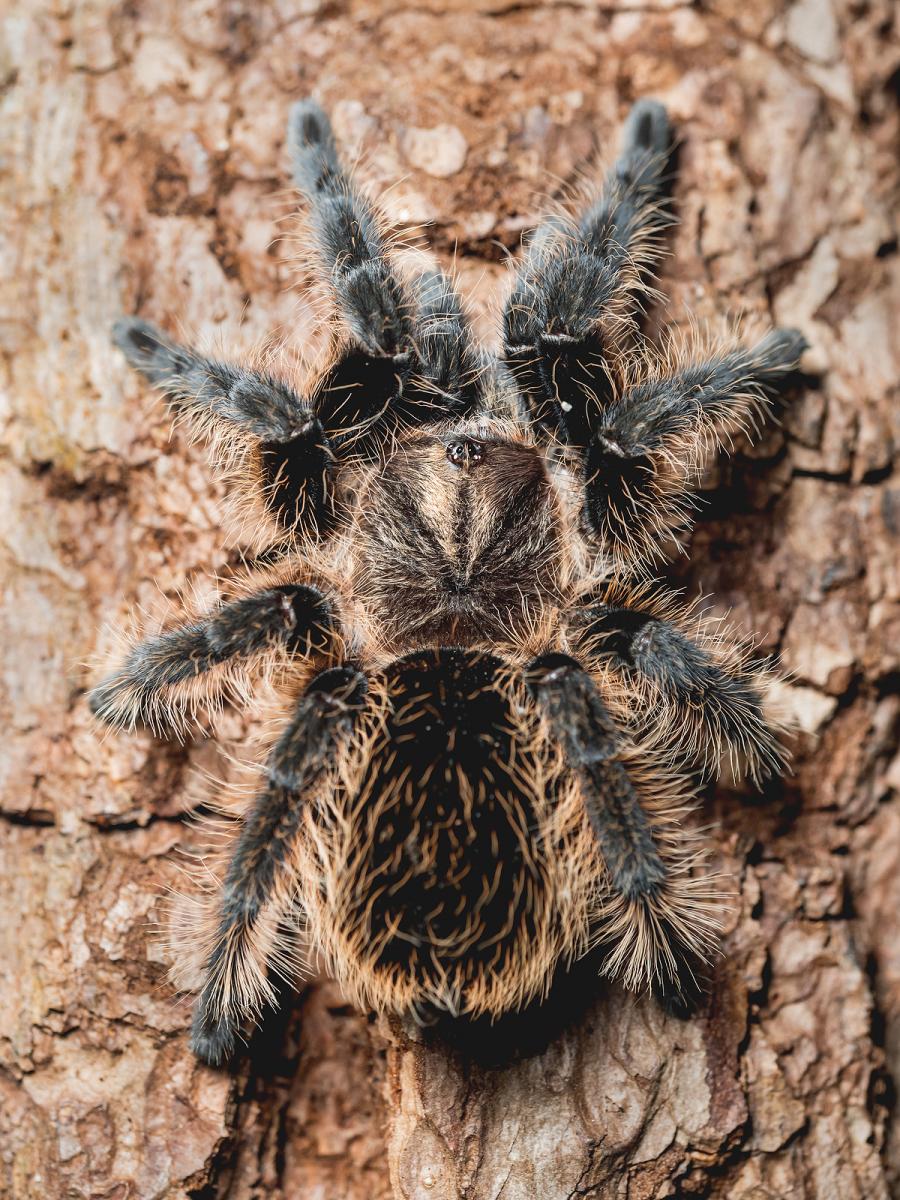 What is a Tarantula