Class: Reptilia » What is a Tiger Rattlesnake (Crotalus tigris)

What is a Tiger Rattlesnake

The Tiger Rattlesnake is a small and reclusive rattlesnake that lives in the American southwest as well as parts of northern Mexico, mainly in the Sonora region. While this snake may be small in stature, it is by no means a snake that should be taken any less seriously than you would a Western Diamondback Rattlesnake.

Tiger Rattlesnakes don’t produce a lot of venom per bite, only yielding around 6 to 11 mg. For comparison, the Mojave Rattlesnake will produce around 50 to 150 mg per bite. Tiger Rattlesnake venom is a combination of neurotoxins that attacks the nervous system as well as mycotoxins that cause muscles to break down and become necrotic.

The lethality of a Tiger Rattlesnake bite isn’t well documented because they cover such a small area and are a reclusive species. If you are one of the very unlucky ones to be bitten by this snake, you need to treat it as a serious medical condition and get to a hospital right away. Swift injections of antivenin is the only sure fire way to combat the effects of the bite. Because bites are so rare, and untreated bites even more rare, it’s hard to calculate the odds of survival for someone who chooses to not treat the wound but due the high toxicity of the venom, there is absolutely zero reason to tough it out. 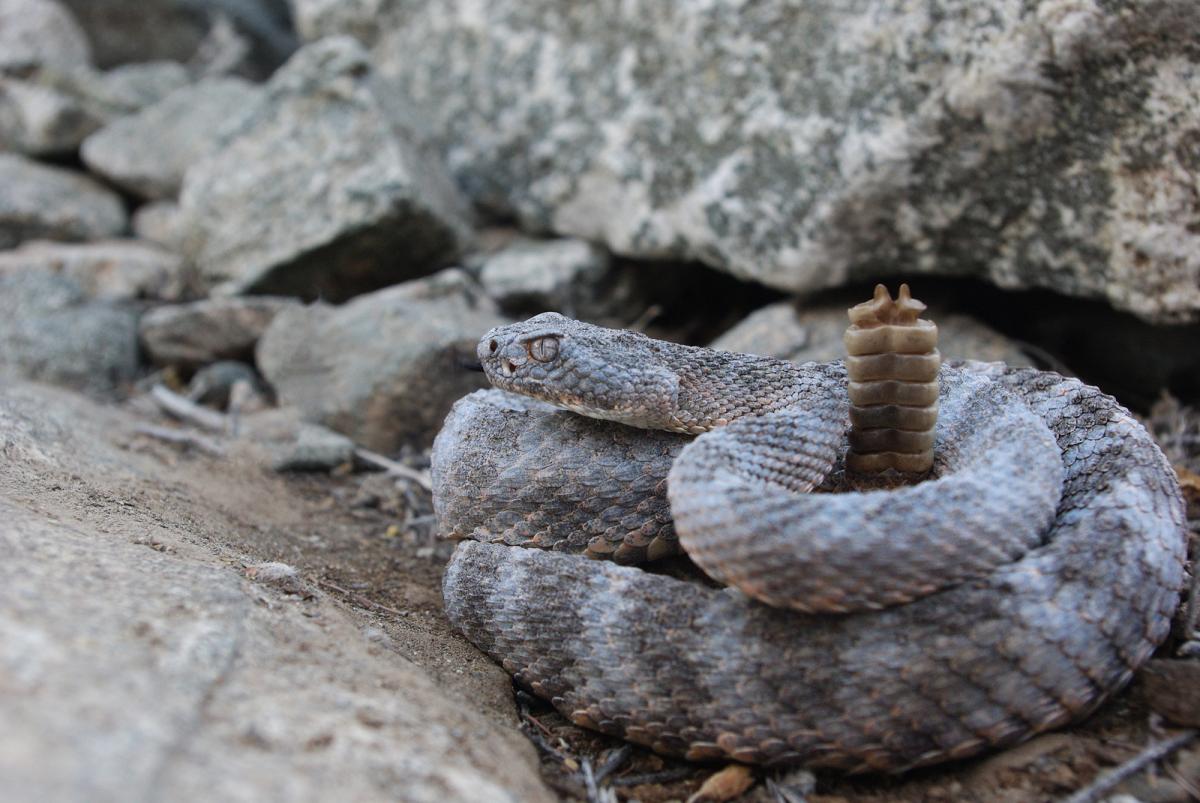 A small Tiger Rattlesnake against the rocks it has evolved to mimic.

What I mean by traditional thickness is that the snake will start out thin around its head, and start to thicken as you move further down the snake towards the main part of its body. As you start to get near the tail, the snakes body will start to narrow again leading to the rattle.

Their coloration ranges from tan, gray, pink, light orange, or a color that closely resembles the ground around it. As far their patterns go, the Tiger Rattlesnake has crossbands that run the length of its body which are typically a darker color variation of their base color. A tan rattlesnake may have brown bands where as an orange one will have dark or brownish orange ones.

Tiger Rattlesnakes grow anywhere from 18 to 36 inches with the average length being somewhere around 24 inches.

Tiger Rattlesnakes will eat lizards, other small reptiles, and small mammals such as kangaroo rats and woodrats.

Breeding season will start in late May and carry into August with the female snakes giving live birth sometime late summer to early fall.

A typical clutch of snakes will have anywhere from 4 to 6 babies in it.

Tiger Rattlesnakes are only found in two places on Earth. One being in Central and southern Arizona and the other being northern Mexico.

In Mexico, the Tiger Rattlesnake lives primarily in the Sonora region with the occasional snake reaching over to Tiburón Island

As of writing this, the Tiger Rattlesnake is not under any federal protections for population control and is considered to have stable numbers.

What is a Tiger Rattlesnake