What is a Trumpeter Swan (Cygnus buccinator)

What is a Trumpeter Swan

Trumpeter Swans are a species of swan found in North America, primarily in the United States and Canada.

These swans are the heaviest birds in North America weighing as much as 30 pounds fully grown.

While being the heaviest native bird to North America, the Trumpeter Swan is also the largest species of waterfowl which includes most ducks, geese, and other swans.

Like other birds in the 1800s, Trumpeter Swans were hunted for their feathers which were put on hats, much like the Snowy Egret. Their skin was also used as makeup applicators and their feathers as writing quills. After being hunted to near extinction, the Trumpeter Swan population has been recovering slowly thanks to conservation efforts which helped their numbers stabilize in the early 2000s.

Trumpeter Swans will form bonds with other swans that they stick together throughout the year including during migration. While it’s believed that Trumpeter Swans bond for life, some will change mates during their life while others may not mate again if their mate is lost or killed. 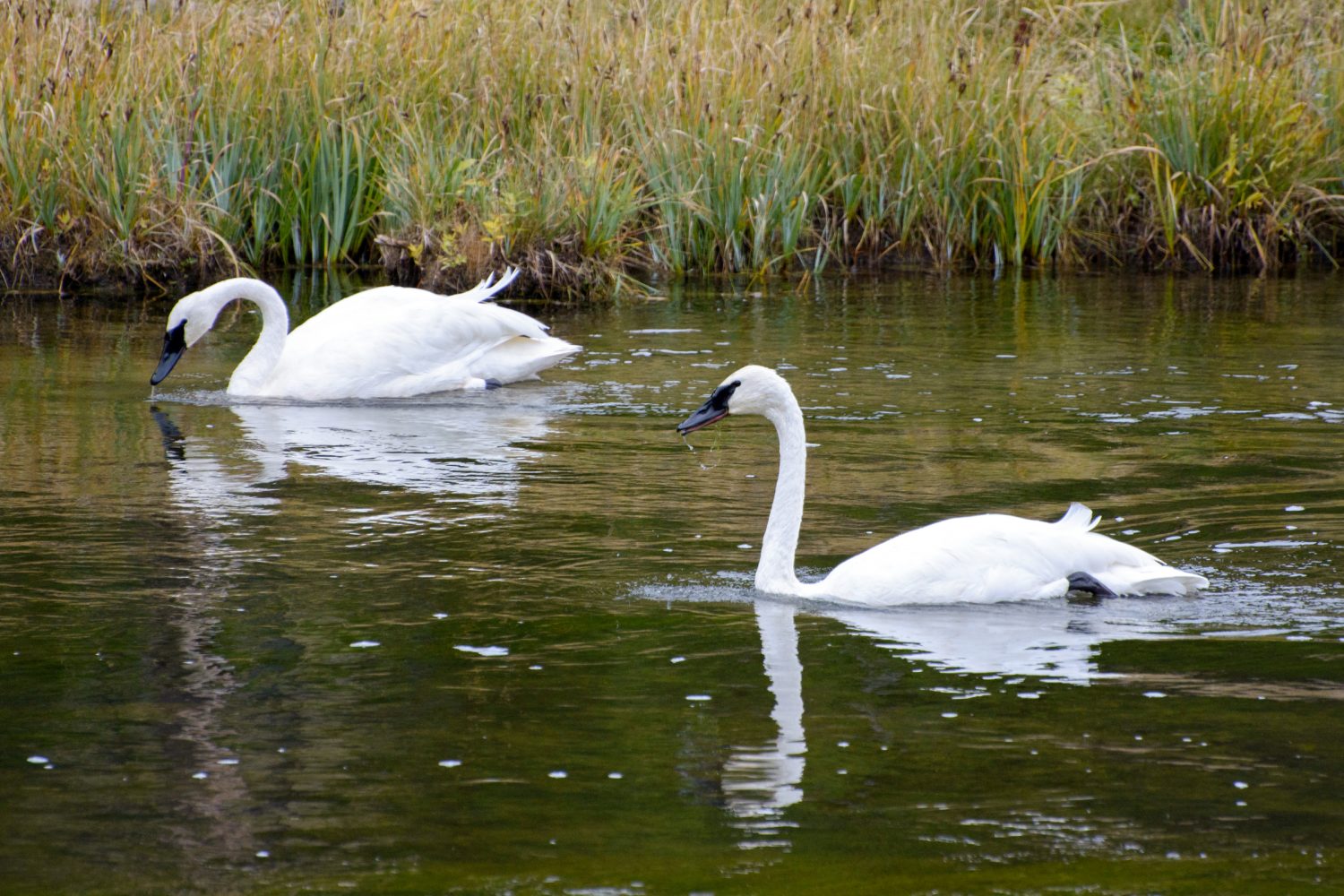 Trumpeter Swans are large-bodied swans and the largest waterfowl in North America, as stated above. These birds are entirely white with a long neck that eventually leads to a bill or beak that is all black. There are occasions where these all-black beaks can be lined with an almost pinkish color near the mouth.

Before they mature, Trumpeter Swans can be grey or ash-colored plumage with pink legs that eventually turn dark in color.

Trumpeter Swans measure to be around 4 to 5 feet in length from bill to tail with the occasional swan reaching nearly 6 feet although this is rare.

Their wingspan measures out to be 6 to 8 feet in length from wingtip to wingtip with the largest ever recorded being 10 feet 2 inches in total length.

Trumpeter Swans eat primarily plant material including pondweed, leaves, roots of aquatic plants, and grass. As young birds, they can be seen eating insects and other small invertebrates and fish but they quickly outgrow this. 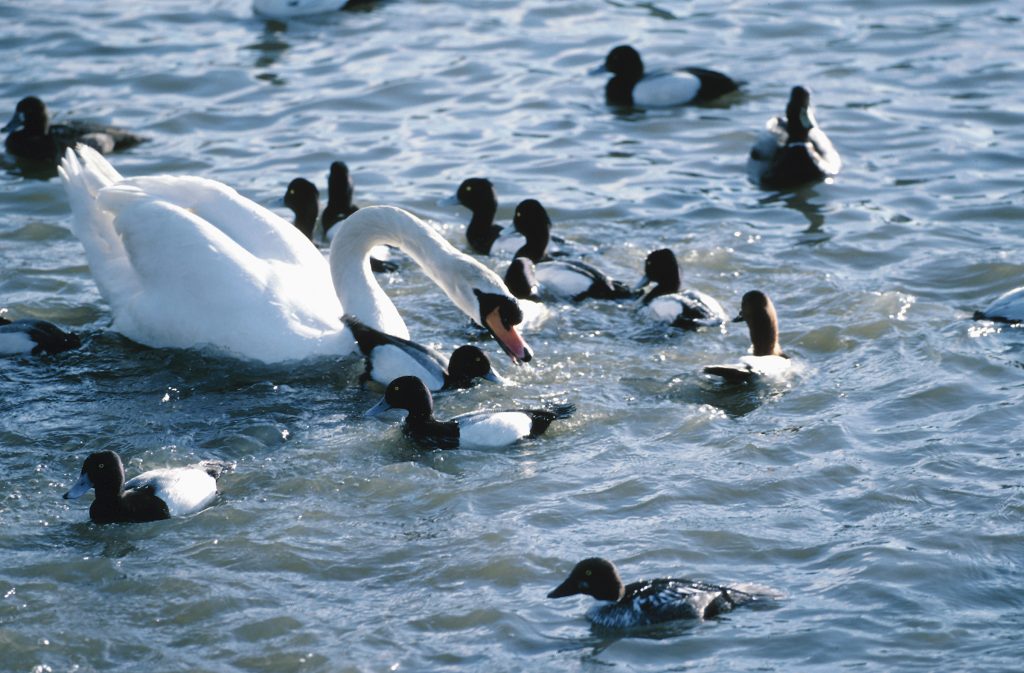 Trumpeter Swans will start mating around spring to start building a nest for the female swan to lay eggs in. From there, the pair will mate and the female will lay 4 to 6 eggs and incubate the eggs for around a month until they hatch. The female swan does a majority of the incubating, only leaving the nest if she absolutely has to or if the male swan needs help protecting the area from dangers.

Trumpeter Swans are found in the United States most of the time with Nevada, Oregon, Idaho, Montana, Wisconsin, South Dakota, and Minnesota being their home year-round. During the breeding season, these swans can be found in Alaska, Yukon, Northwest Territories, British Columbia, Alberta, Saskatchewan, Ontario, and Michigan. 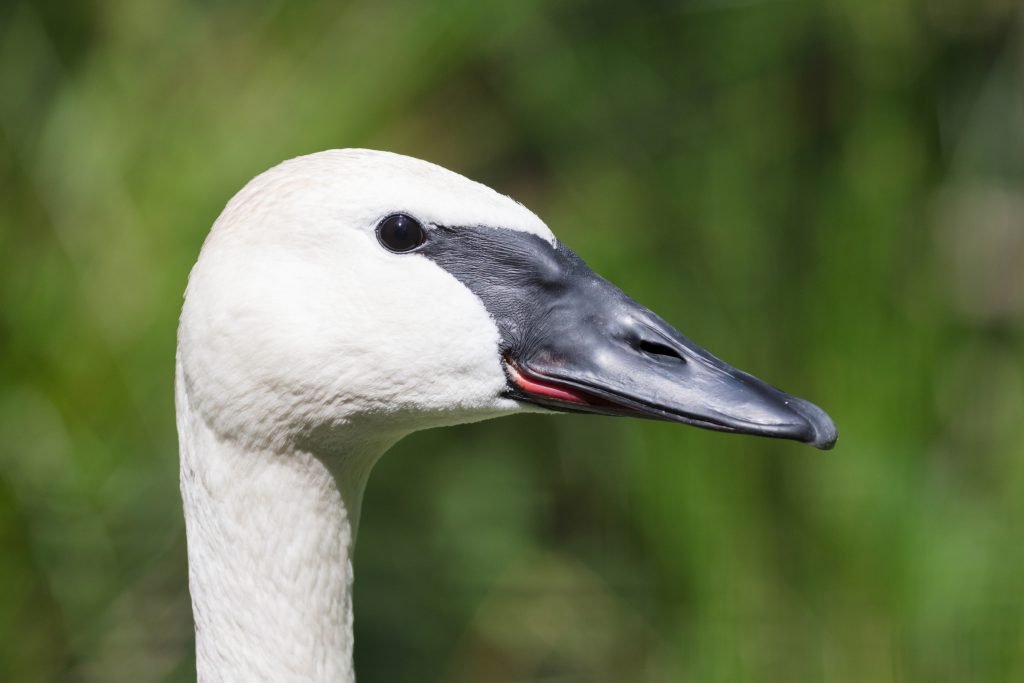 How Long do Trumpeter Swans Live

Trumpeter Swans can live to be over 20 years old in the wild with one swan reaching the age of 35 in Washington.

While their numbers are slowly climbing from being hunted to near extinction, the Trumpeter Swan is still a protected species under the Migratory Treat act of 1918 as well as being protected by the individual states they are found in.

What is a Trumpeter Swan