Class: Reptilia » What is a Western Pond Turtle (Actinemys marmorata)

Western Pond Turtles, also known as the Pacific Pond Turtle, are small to medium-sized turtle that lives exclusively on the west coast of America as well as parts of northwest Mexico.

Even though they may be called pond turtles, these guys can be found in and around just about every type of freshwater sources like streams, lakes, rivers, marshes, and more. If spotted outside of water, it’s best to leave these turtles be as they can be walking in between water sources that are entirely natural.

Western Pond Turtles are considered to be diurnal in nature which means when the sun is out, they are too, climate and weather permitting. During droughts or particularly hot summers, these turtles can bury themselves in the soft mud of a pond and if mud isn’t available, they will look to reside within patches of algae that may have been left behind. 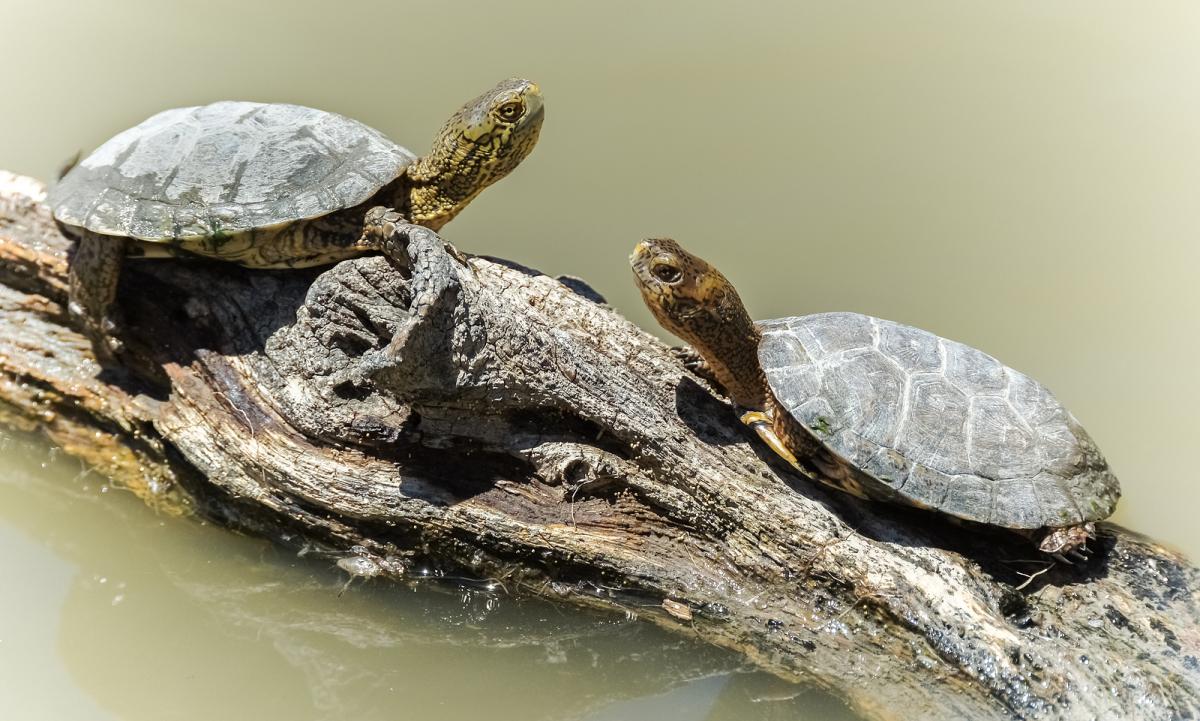 Western Pond Turtles sunbathing on a log over a pond.

Western Pond Turtles are small to medium in size with a classic, hard, smooth shell with large coastal and vertebral scutes. For those who may not know, like me before researching these turtles, the coastal scale is basically the large sections on the side of the turtle that resemble scales. The vertebral scutes are the sections or scales that are on top of the turtle’s shell. The smaller-looking scutes that wrap around the edge of a turtle’s shell are called marginal scutes. The term scute is essentially interchangeable with scales as scutes are technically scales.

Western Pond Turtles can grow between 3.5 to 8.5 inches in length with baby turtles starting out life at around 1 inch.

Western Pond Turtles have a diet that consists of worms, frogs, crawfish, aquatic plants, and invertebrates.

Western Pond Turtles’ breeding season happens in April and May with eggs being laid sometime between April and August. Eggs laid in April are done so by female turtles that have an irregular breeding cycle as they can lay 1 to 2 clutches a year or even as little as a clutch every other year.

Female turtles will lay anywhere from 2 to 11 eggs at a time in a nest that is near a stream or another water source. Nests are more often than not in areas of full or mostly full sunlight to keep the eggs nice and warm.

Western Pond Turtles can be found in Washington, Oregon, California, and Nevada in the United States. These turtles can also be seen on the Baja peninsula.

The Western Pond Turtles population has been declining over the years with populations in Washington and British Columbia becoming nearly extinct. Because of this, the U.S Fish and Wildlife Service has been looking to add them to the Endangered Species Act but as of right now, they’re still off the list. Even though they’re not on the federal protection list yet, the Western Pond Turtle is protected in California.