Desert Animals » What is an Antelope Ground Squirrel

Antelope squirrels or antelope ground squirrels of the genus Ammospermophilus are sciurids found in the desert and dry scrub areas of the southwestern United States and northern Mexico. They are a type of ground squirrel and are able to resist hyperthermia and can survive body temperatures over 104 °F.

There are currently four recognised species in the world, with one subspecies:

All are somewhat similar in appearance and behavior. They are around 5.5″ – 6.7″ long with a 2.4″ – 3.9″ tail, and weigh 3.9–5.3 oz. The tail is somewhat flattened. They have a single white stripe on both flanks and none on the face. They live in burrows, which they dig for themselves. They are diurnal, and do not hibernate (though they become less active during the winter), so they are fairly easily seen. 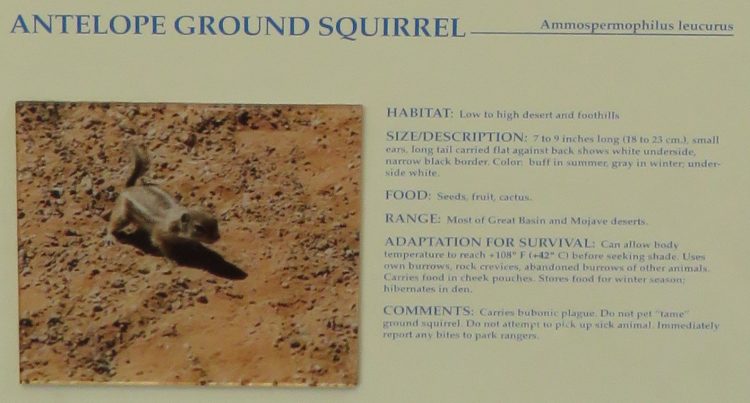 What is an Antelope Ground Squirrel

Low to high desert and foothills

Most of Great Basin and Mojave deserts

Uses own burrows, rock crevices, abandoned burrows of other animals.

Do not “tame” ground squirrel.

Do not attempt to pick up sick animal.

What is an Antelope Ground Squirrel