Arizona » What to Expect at Havasu Falls

Havasu Falls is the main attraction, the waterfall you always see, and the most accessible waterfall located in Havasupai.

With the backdrop of canyon walls directly behind it and a slot canyon to its left, Havasu Falls brings some of the most satisfying and awe-inspiring views while also having light foot traffic making it feel more exclusive or special to stand in front of. 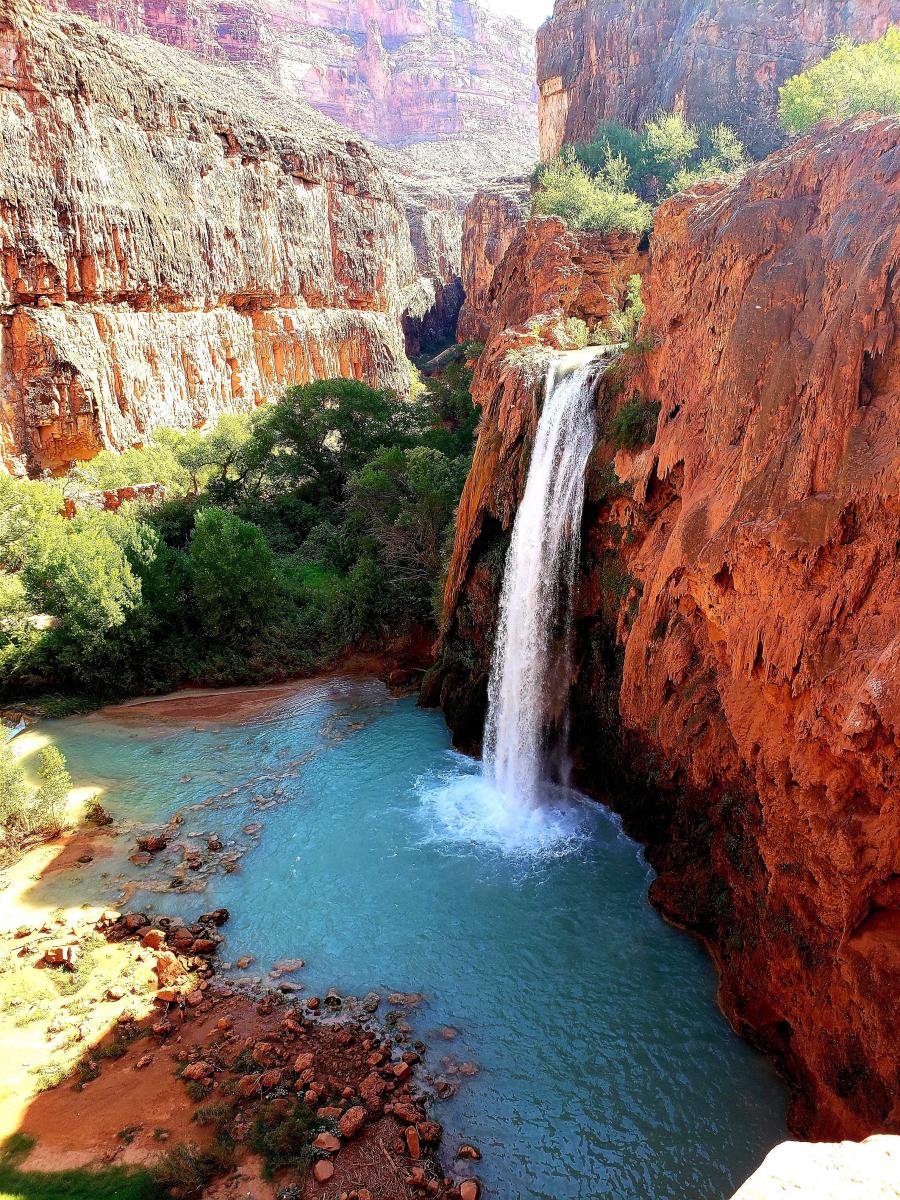 Falling at a height of 98 feet, Havasu Falls, or Supai Falls, is a monster of a waterfall churning hundreds of gallons of water in minutes giving it that classic force of nature feel rather than looking like a babbling brook.

With all of that said and done, you’re probably wondering what to expect to see at Havasu Falls and what to bring if you’re lucky enough to get permits, that’s where I come in.

Below I will layout general information about the falls, what to bring, how to get there, and any other tips to help you have the best experience.

As stated before, Havasu Falls is a huge waterfall with water falling over 100 feet to create a pool of light blue and green water where hikers can relax and cool down during the Arizona heat.

The water tends to stay around 70 degrees Fahrenheit, or 21 degrees Celsius for the rest of the world, all year even during the winter months. There are times where the water will dip below 70, but it’s the wintertime so chances are that you won’t be hitting the water.

Winter and summer are the only months that have extremes on either side with summer averaging the mid 90’s and the winters dropping into the low 20’s.

The spring and fall months have nearly identical weather with spring starting low 70’s raising to high 80’s, and fall starting at high 80’s dropping to the low 70’s or even ’60s. Be sure to keep in mind that these are daytime temperatures since that is the time when you visit Havasu Falls.

Because of the speed and volume at which Havasu Falls is shooting water, it isn’t recommended that you stand or swim under the waterfall as it can injure you if you lose your footing and fall under the weight of the water as well as the potential of catching a rogue river rock or pebble to the body.

The falls form a natural pool at the bottom where anyone can swim or wade into.

From what I saw last time I was there, the pool gets decently deep to the point where people were jumping off the lower rocks into the water but keep in mind that cliff jumping like that is not allowed and can result in punishment if caught.

While supplying the water to form the natural pool beneath it, Havasu Falls also forms a few mini pools further down the river allowing for people to use them as a sort of natural bathtub to sit and relax in without worrying about the flowing water pushing them away.

Due to its popularity, Havasu Falls can get crowded from time to time especially during lunch hours as people tend to relax there to avoid the Arizona heat and use it as a scenic lunch spot.

If you want to avoid the crowds either for picture taking or just to be alone, go early in the morning while most are still getting ready for the day.

In my experience, going from around 7 AM – 11 AM were the best hours to go to avoid the crowds but I also went early September so peak hours may be different during the other months. 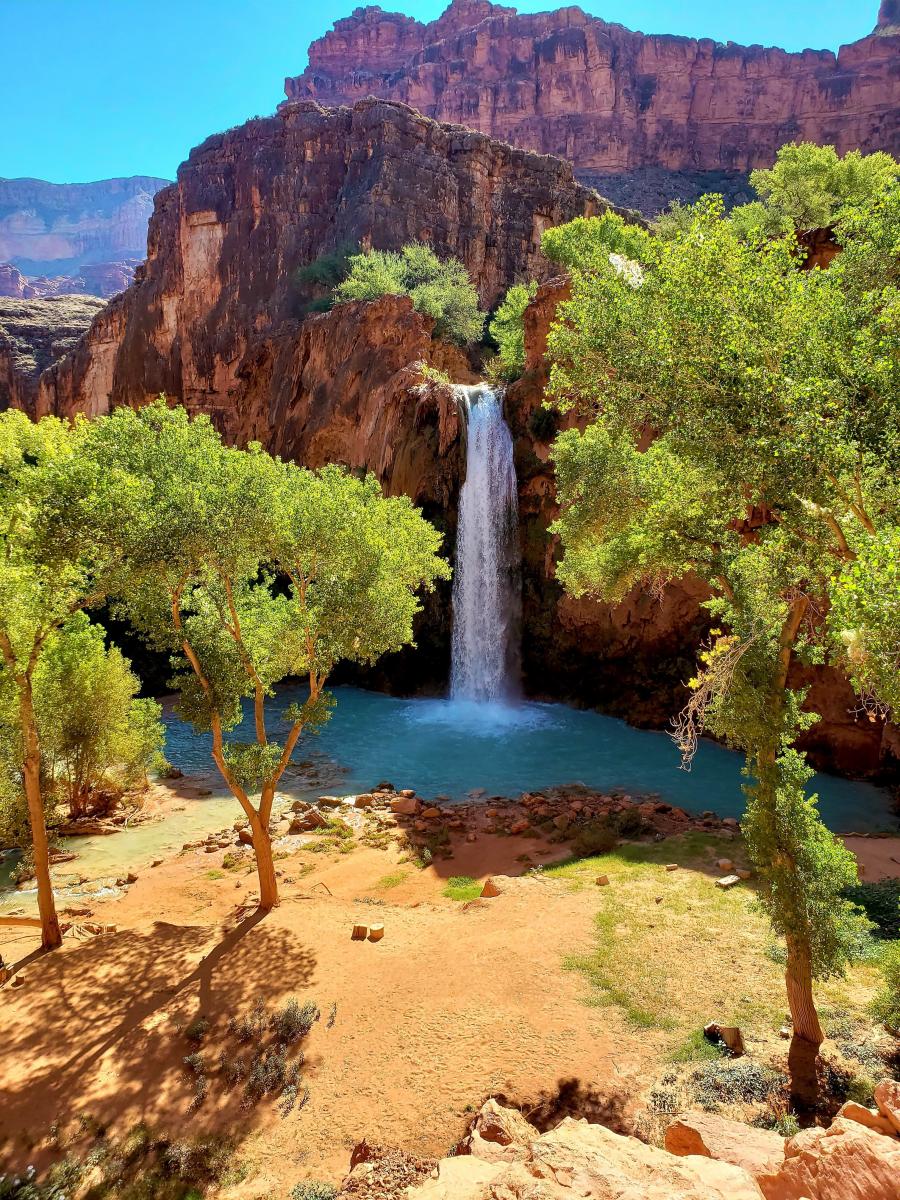 As far as those wondering what space is like for sitting and relaxing go, the surrounding area has a decent amount of open space so that you don’t always have to fight for a spot to call your own. The base of Havasu Falls has different levels that form these massive, almost stair-like, platforms the lead down to the pool allowing people to enjoy the view from different perspectives instead of it only being a level area.

Havasu Falls didn’t always look like it does today. Over time, the falls and pools beneath have been transformed over and over again due to flash floods reshaping and retracing river routes. 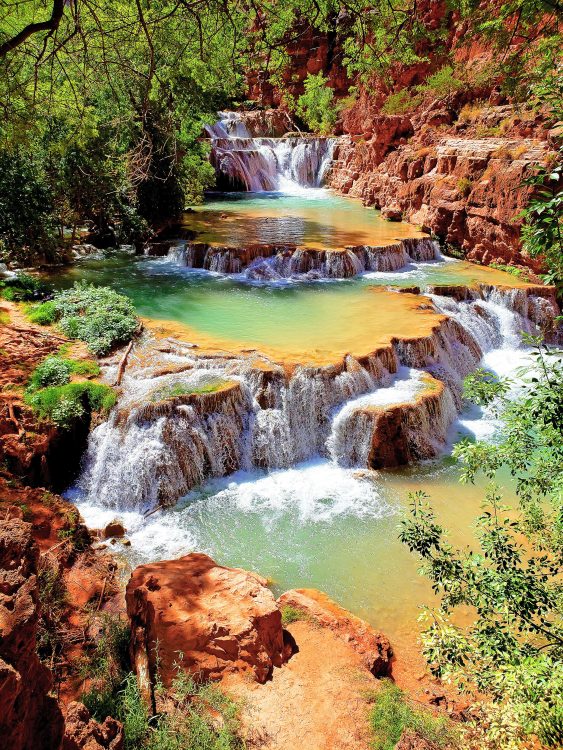 Before 1910, Havasu Falls wasn’t one big waterfall pouring over the canyon walls, but multiple smaller falls creating a veil of water which is what gave it the name of Bridal Veil Falls.

The best way to imagine what it would look like back then is to imagine one of the sections of Beaver Falls, just much much taller.

Around 1910 is when the first indent formed at the top of the falls and the rest is history.

One of the main reasons people go to Havasu Falls is to make a memory of a lifetime as well as to share that memory with everyone they know. Thousands upon thousands of pictures are taken every year of Havasu Falls and if you’re able to get permits to go, you’ll want to do the same thing.

Based upon my last trip, which was in early September 2018, the falls seemed to be permanently in the shadows of the surrounding slot canyon which can be annoying for anyone trying to get a fully sunlit photo of the falls in its entirety. 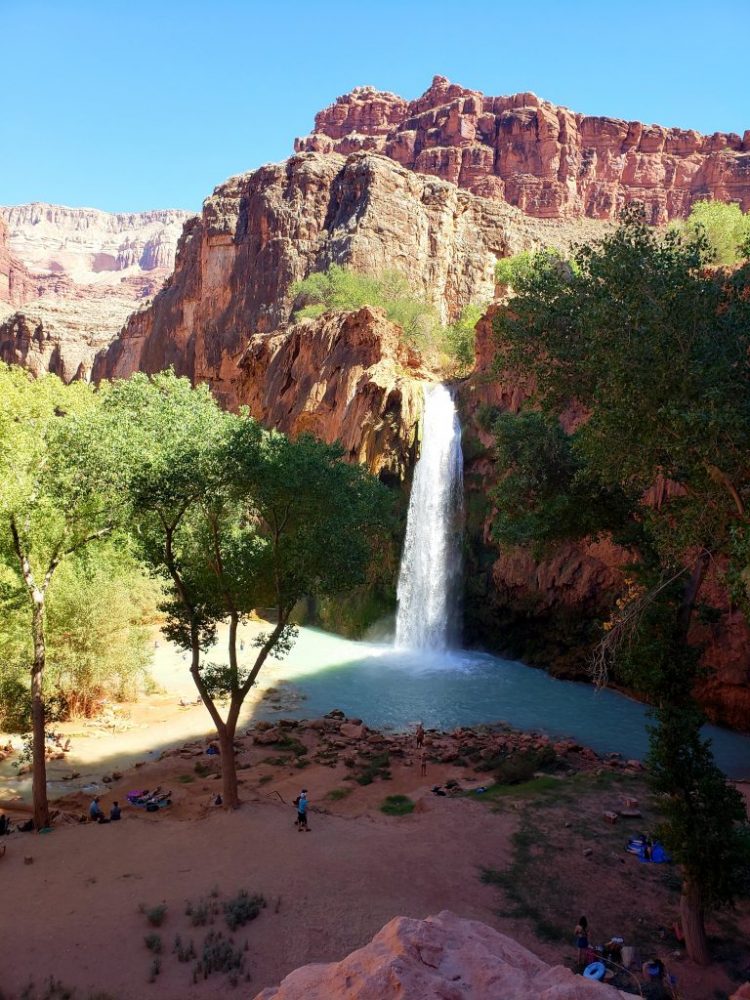 Even though the falls stayed shaded, the natural pools beneath Havasu Falls saw hours of sun. If you’re one of the many who wants to snap the perfect shot of Havasu falls, the best place to do it is on the side ramp that leads down to the falls from the main trail. Due to the nature of the surrounding rocks, caution is advised when inching close to the drop off to take pictures as one stumble or misstep can seriously injure you.

How to Get to Havasu Falls

In order to get to Havasu Falls, you must be one of the lucky hikers to acquire permits to stay down at the campsite or the lodge in the village. Because it is a permit-only area, no day hikers are allowed.

The village lodge is located about 2 miles away from Havasu falls so if you stay there during your trip, be prepared to do a lot of walking.

Getting to Havasu Falls from the Village

Leaving from the village to Havasu Falls is pretty easy because there are trail signs everywhere pointing you in the right direction to get there plus the trail is clearly marked from foot traffic. Getting there is going to be the fun part for those walking from up top because the trail down is about 80 – 90 percent sand. After you finish the hell hike, the falls should appear under you and then all you do is take the ramp down and you’re there.

Getting to Havasu Falls from the Campsite

For everyone else staying at the campsites, the opposite is true. The falls are about a half-mile to a mile away depending on how deep you set up camp and the trail consists of generic dirt and rock ground instead of loose sand. While you won’t have to walk down the ramp like those who stayed in the village, you will have to walk up a steady incline in order to get back up to the falls. Once you defeat the hike there, you should have the falls appear at eye level with minimal effort or drops to get to the natural pools at the bottom.

What to Take to Havasu Falls

After setting up camp and possibly even taking a recovery nap, you want to go spend time at Havasu Falls and take it all in. Perfect, but what do you need to bring? Do you need an umbrella, a tent, tables for eating, or maybe even a cooler to keep stuff cold? Luckily, Havasu Falls is extremely accessible from the campsites and just a couple of miles away from the village so all you really need is basic gear to get the most out of it. What I mean by basic gear is:

You can obviously bring other gear with you if you want but because of how easy it is to get to the falls, you don’t need anything super-specialized to enjoy it and take it all in.

There are picnic tables about the area but because of how many people could potentially be there, you’re better off finding a flat spot to set up shop. Like the rest of the canyon, you must take all trash you bring to Havasu Falls with you because there aren’t any trash cans to throw stuff away.

In a shortened version, here are some quick tips to remember when going to Havasu Falls.