Arizona » What to Expect at Mooney Falls

Mooney Falls is the first waterfall beneath the Havasupai campsite as you keep walking away from Havasu Falls.

While not as popular or accessible as Havasu Falls, Mooney Falls is just as stunning and breathtaking if not more so than its famous sibling.

What to expect at Mooney Falls

The reason why I say it’s not as accessible as Havasu Falls is because, in order to get to them, you must descend down a very narrow path carved into the wall with vertical drops on the your side. 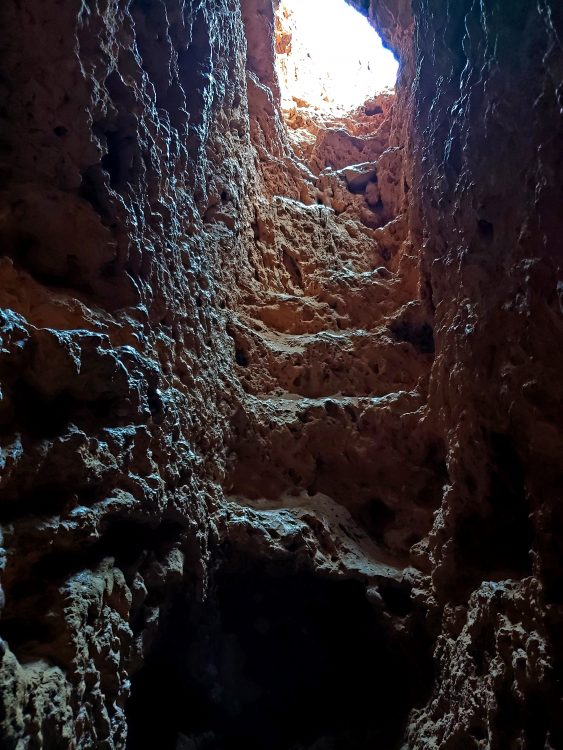 In all honesty, looking back, it really is but at the moment you forget about all of that to get an up-close look at Mooney Falls.

If you’ve made it this far, you’re probably wondering what to expect to see down at Mooney Falls and what to bring; that’s where I come in.

Below I will layout general information about the falls, what to bring, how to get there, and any other tips to help you have the best experience

Much like Havasu Falls, Mooney Falls water temperature stays within the 70 degrees Fahrenheit range all year despite being a little lower. A reason why it may seem colder is because of its location. You tend to be in the shade most of the time not allowing the sun to warm you up while in the water.

Mooney Falls is located in Arizona and follows the same weather patterns as everywhere else even though it is located in a canyon.

Winter and summer are the only months that have extremes on either side with summer averaging the mid 90’s and the winters dropping into the low 20’s.

The spring and fall months have nearly identical weather with spring starting low 70’s raising to high 80’s, and fall starting at high 80’s dropping to the low 70’s or even ’60s.

Mooney Falls and the Natural Pools

If you’ve read my post on what to expect from Havasu Falls you may be thinking “man, this seems really similar to the Havasu Falls post.”

Well, you’re right. Mooney Falls and Havasu Falls are so similar in the way they function that they end up sharing a lot of the same features and experiences.

The difference is that Mooney Falls are lower as well as being much, much harder to get to. 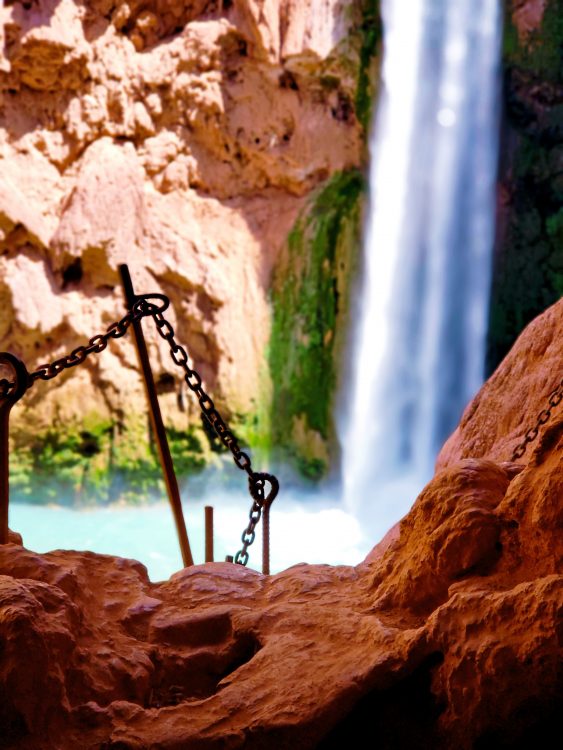 In an attempt to mimic its brother, Mooney Falls also forms a natural pool under it as well as feeding smaller pools underneath it. Because Mooney Falls typically seem to be more shaded, the water that feeds into it has a light but deep blue rather than some of the green and blue water seen at Havasu Falls.

The main natural pool formed by Mooney Falls doesn’t get too deep allowing hikers to wade into the pools without fearing a massive drop off. 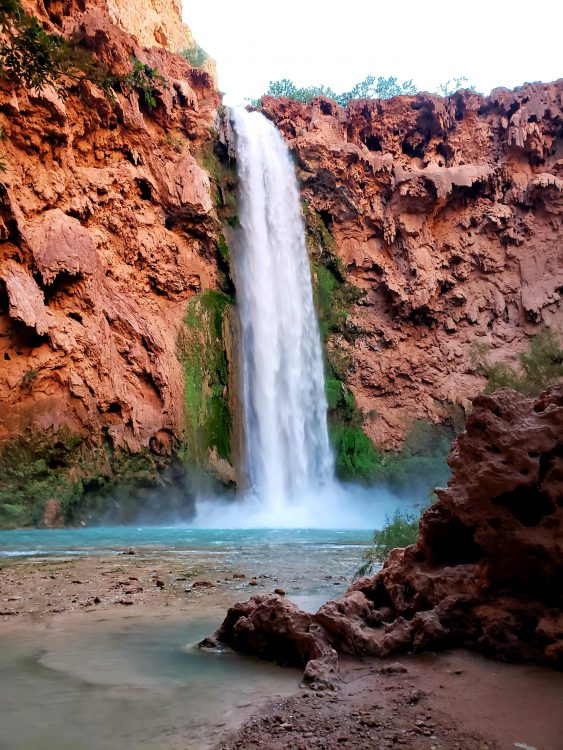 As for most waterfalls, getting a full-sized picture of them can be daunting or even dangerous and Mooney Falls is no exception.

To get a good side picture you have to take it on the way down the base which as mentioned before, it’s on the side of a cliff. There are a couple of spots that can work for photo ops on the way down, but doing so is a bit risky so double check your footing and grip before taking one.

Before the trek down the side of a cliff, you can also snap a pretty cool top-down picture by edging close to the edge before the drop-off.

As one should know, getting closer to the edge increases slip and stumbling related injuries so only go as far as you need to reduce the risk.

Mooney Falls will get glimmers of sunlight throughout the morning so be prepared to be shooting in shadows with if you miss that window of sun.

Getting to Mooney Falls

Oh boy. This is the part that you may have heard of when people tell you about the dangers of hiking down Havasupai. In order to get to Mooney Falls, you have to be prepared to climb and crawl down a narrow path carved into the side of a cliff with a chain on one side to help prevent you from falling. So that doesn’t sound too bad right? Well, when everything on the way down feels like the ice level from Mario things, get tricky.

Because of how much closer Mooney Falls is to the canyon walls, mist, and waterfall spray coat everything with a perpetual blanket of moisture making everything slick and sometimes mossy.

The key to tackling this is to take your time and wear boots or shoes with a dependable grip.

There is a chain on one side for you to grab onto for stability, but sure footing will ensure you make it down safely.

The path down is the same as it is up, so expected to be stopping for people coming up at the same time you would be heading down. 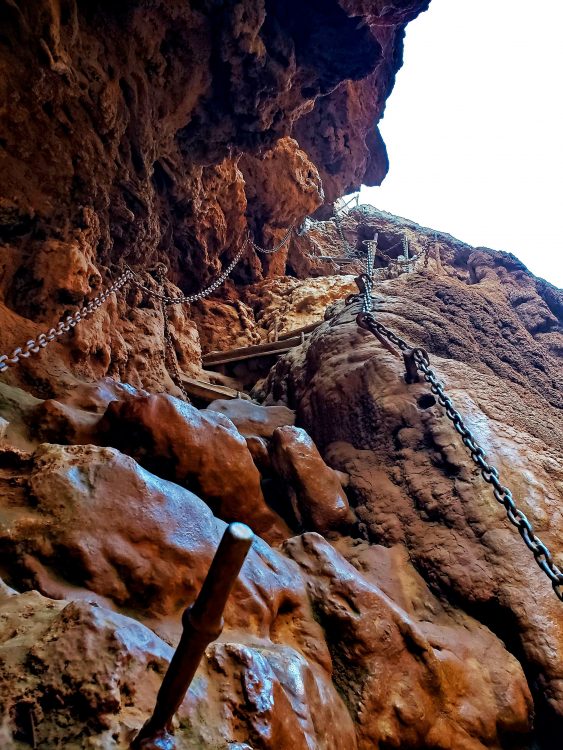 Mooney Falls is located right about where camping spots end so for those staying at the campsite, the walk to the wall path is a short one. If you’re hiking there from the village, be sure to calculate in three miles of hiking before reaching the start.

What to bring to Mooney Falls

If you want to get to and experience Mooney properly, you may have to bring a few more items with you and plan more time to go there than you would for Havasu Falls.

On top of bringing the basic gear, you may also want to bring gloves to help you grip the chain and wet rock better as well as more waterproof or resistant gear. Below will be a list of what to bring:

Hiking Boots with a reliable grip

Backpack or a day pack

Snacks or a light lunch

Sunscreen and a hat

Picnic style lunches are doable at Mooney Falls as long as you’re willing to carry all the supplies down the path and back up again. There are no picnic tables at the base however, so bring a blanket if you want to sit on something either than the ground, rocks, or tree stumps.

What to expect at Mooney Falls