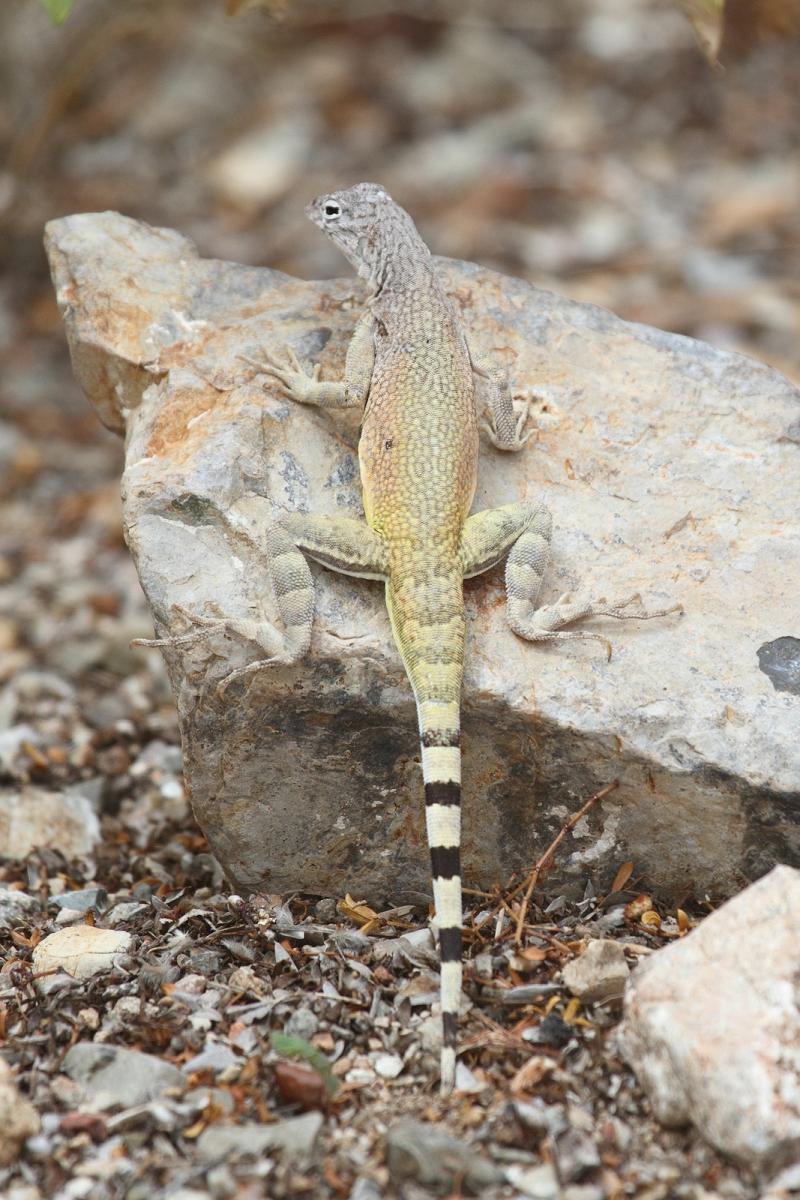 The Zebra-tailed Lizard is a relatively large lizard that can be found basking on rocks or along the desert floor running from shrub to shrub looking for shade in the American southwest as well as Mexico. There are nine subspecies of this lizard. Being a lizard that is active during the day, the Zebra-tailed lizard has developed a method to avoid the heat of the ground by standing on opposite legs at once.

At night, this lizard can get found burrowed in the sand which is also a method they use to hide from would-be predators. If burrowing isn’t an option, Zebra-tailed Lizards can be found running in short distances on their hind legs. 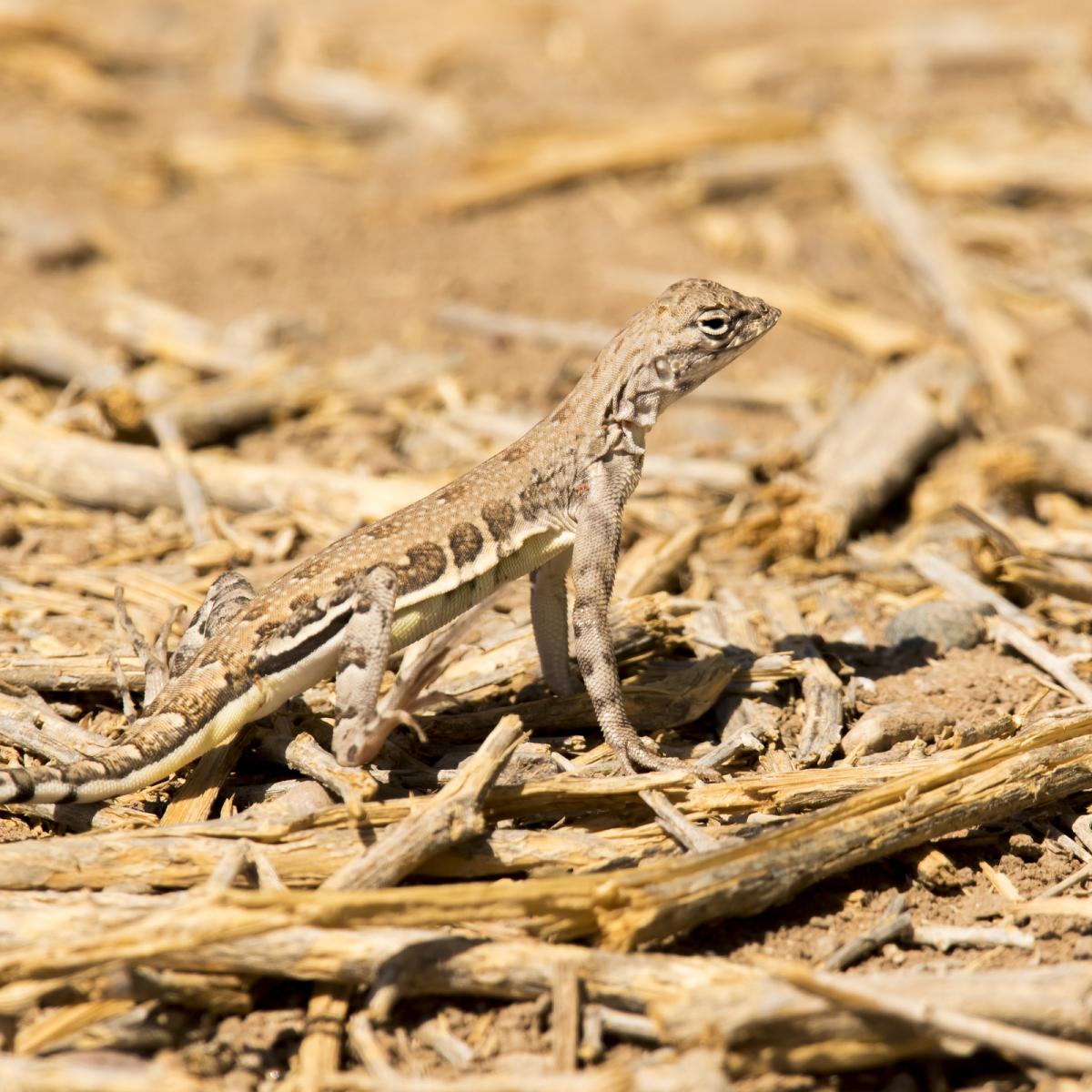 This zebra-tailed lizard in Arlington Wildlife Area, Arizona is perfectly camouflaged in the desert.

Zebra Tailed-lizards are relatively large lizards with males and females being about the same size with females being ever so slightly shorter in length. These lizards are typically grey, brown, or tan with two sets of spots that run the length of their back that eventually turn into stripes on their tail giving them their name, the Zebra-tailed lizard.

The coloration under their tail is white rather than brown as seen on the top of their body. Their bellies are light in color, often times white or pale following the coloration of the tail. During mating season, male lizards will develop orange or yellow patches on their sides just behind their front legs. Their throats will also become pinkish in color during this time.

These lizards have longer legs and tails than other lizards in the Iguania suborder which is why they may look taller than a normal lizard does. Zebra-tailed lizards have long toes that will curl upwards when standing still or when they’re running from predators. 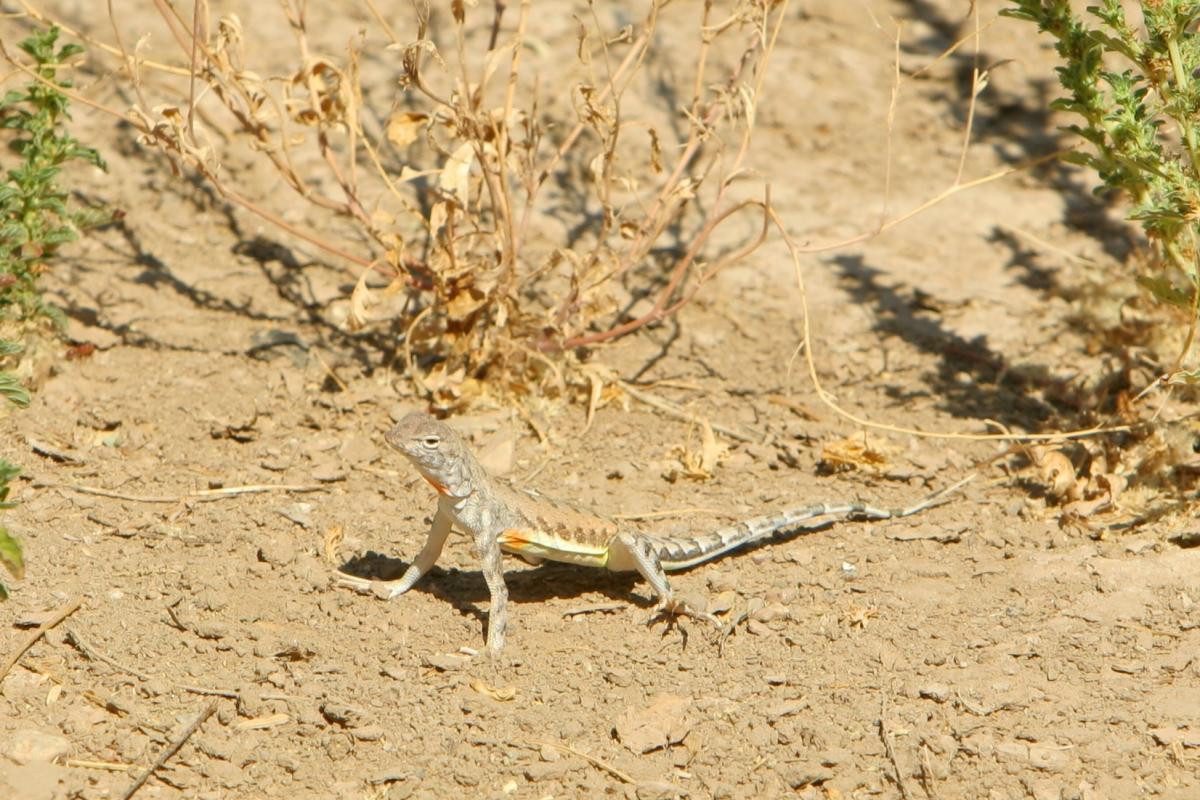 Zebra-tailed Lizard entire on the ground up on feet

Zebra-tailed lizards grow to be around 2.5 to 4 inches in body length. Including their tail, these lizards can reach a total length of around 9 inches from the snout to the tip of their tail.

Zebra-tailed lizards are insectivores eating ants, spiders, scorpions, and other bugs it can find crawling around the desert floor. They are also known to eat plants from time to time but prefer to stick with bugs.

Zebra-tailed lizards’ breeding season begins in May and ends around August with eggs being laid anywhere from July to November. The gestation for their eggs is around 48 to 62 days and females will lay 2 to 8 eggs at a time with an average of 4.

These lizards can be found in the open desert plains, under vegetation, washes, and on top of and under rocks.

How Long do Zebra-tailed Lizards Live

The Zebra-tailed Lizard lives around 3 to 4 years in the wild.

As of writing this, the Zebra-tailed lizards are not considered to be an endangered species and do not have any federal protections.